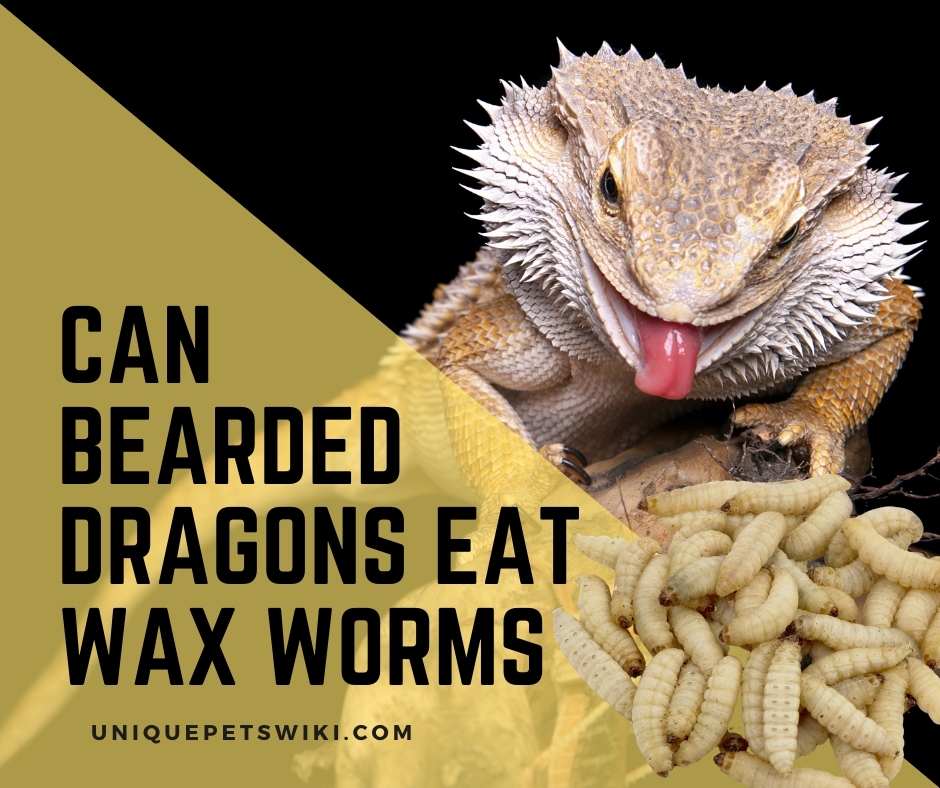 Wax worms are highly nutritious and are excellent choice food for many pets. But can a bearded dragon eat wax worms?

Wax Worms are good food for many captivated animals and serve best as a treat. However, when it comes to the bearded dragon, you need to make sure that these worms are safe before feeding them.

Although the beardies eat a variety of insects, some insects are harmful to them; thus, you need to be cautious.

Let’s dig more in-depth about the wax worm and see if it’s worth feeding them to bearded dragons and more.

You will not know whether to keep wax worms off or not until you understand it’s nutritional information. According to GrubcO waxworms contain the following nutritional value.

From the nutritional profile of wax worm; we can see that these feeder insects are super higher in phosphorus than calcium. They’re also extremely rich in fat which accounts for 22.2 % and lower in protein at 15.5 %.

Bearded dragons can eat the wax worms and generally they are fond of them. Wax worms are highly palatable due to their soft bodies, and the beardies can easily swallow them.

However, note that you should only serve these feeder insects occasionally in limited amounts.

Wax worms are not preferred as a staple food for a bearded dragon because they’re relatively low in nutrition compared to other insects like super worms, hornworms, butterworms, etc.

As we saw earlier in the nutritional aspects of the waxworms, they have a low Calcium to phosphorus ratio. But despite that, wax worms provide a decent amount of moisture that helps in dehydrating the dragon.

Wax worm also gives a respectable contribution of protein in the diet. And as you know, the beardies need protein for growth, good health and well-being. The high-fat content makes wax worms tasteful, and your lizard will definitely love their flavor.

Since waxworms do not offer a lot of nutrients to bearded dragons, you can feed them once in a week or every other week. The number of wax worms a bearded dragon can eat varies depending on the age and size of the lizard.

The babies and juvenile bearded dragons are growing at a fast pace and therefore need to take a lot of protein and more often. So, they should eat around 3-5 wax worms per feeding.

Contrary, adult bearded dragons have a minimum requirement of protein in their bodies since they don’t grow. You can choose to feed them around 3-5 wax worms per feeding, but less often.

The main reason for the infrequent feeding of waxworms is due to their poor calcium to phosphorus ratio and excess fat. As you know, too much fat is harmful to bearded dragons because it tends to cause health issues such as obesity.

Moreover, excess phosphorus blocks calcium absorption by binding to it. This is a concerning issue since calcium deficiency will pose your dragon to metabolic bone disease.

What Other Worms Can I Feed My Bearded Dragons Instead of Wax Worm?

The good thing about bearded dragons is that they consume a variety of foods, including insects. Therefore, there are many worm options to go for, such as silkworms, super worms, butterworms, and hornworms, crickets, among others.

All these feeders have favorable nutritional information and offer a substantial amount of essential nutrients to bearded dragons. Let’s see what the worms mentioned above can offer, in terms of nutrition.

If you want to know whether the wax worms you are buying are dead or not, most of the time, those that are non-living appear black and are stiff. I would not let my dragon eat dead wax worms, and I would also advise you to keep off from them.

Bearded dragons enjoy eating the worms when they are alive, and you should feed them that way. Buying dead wax worms is one way to put your lizard at health risks since you don’t know what killed them; thus, you need to be cautious.

Live worms tend to wiggle around the container and are beige; it’s easy to distinguish them.

Also, at the pupa stage, the worms change color to almost black where you might confuse them to be dead. But it is worth making sure that they aren’t dead before purchasing.

The fact that baby bearded dragons need a diet that is rich in protein, you might be wondering if it’s worth feeding them wax worms. However, you should not feed wax worms as basic foods for your baby dragons since they are much too fatty.

The worms can give the babies a lot of energy which isn’t good for their health. Therefore, wax worms are not a good option to feed to baby bearded dragons, instead, look for crickets or other nutritious worms such as silk worms or super worms.

But if you are dealing with adult bearded dragons, wax worms aren’t harmful to them. They are safe and provide the necessary nutrients though in limited proportions. That’s why you should only feed them less frequently.

There is nothing wrong feeding wax worms to bearded dragons as long as you serve them while alive and in moderation. Waxworms are more-fatty but provide a decent amount of protein, fiber and moisture.

Feeding them in excess is unsafe since they add a lot of energy to bearded dragons and can easily cause obesity. In small amounts, wax worm adds a variety to the beardies diet, which is good.