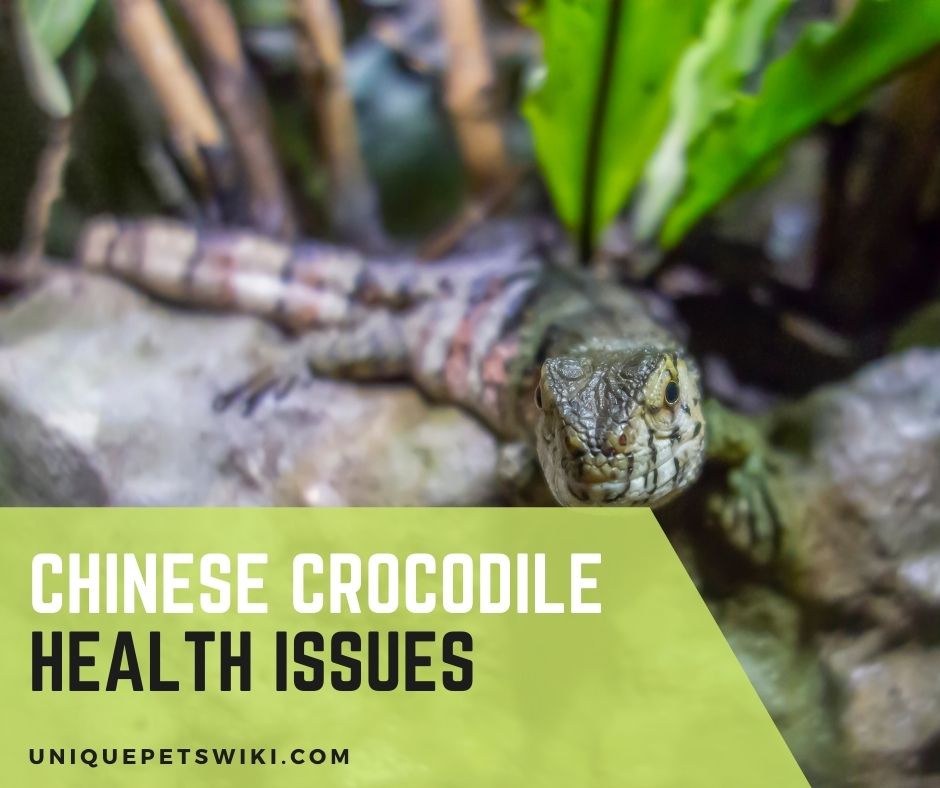 If you have kept any species of reptile lizard before, you should be familiar with some diseases common to captive reptiles. Unfortunately, the Chinese crocodile lizards seem to be uniquely different in so many ways.

For one, their cage set up is quite different from that of other species of reptile lizards. Secondly, they hardly will fall sick if you manage them well.

But if they do fall sick, what do you do to remedy the situation before it takes your lizard’s life? How can you tell when your lizard is ill? What are you supposed to check for to ensure that your lizard stays in health?

All these and many more will be treated in this article. You’re reading this because you care about the health of your lizards.

Your understanding of these diseases and health concerns will help you to be a better keeper to your lizard. Keep reading.

Both in the wild and captivity, the shinisaurus aren’t characterized as ‘very active lizards’. As a matter of fact, they’re known to often go on a metabolic pause from time to time.

What this means is that they would appear motionless and would usually not respond to stimuli (feel nothing) for several hours.

While in this condition, they would slow down metabolism to conserve energy. With this in mind, it would be difficult to tell when your lizard is sick and when it’s fine.

That notwithstanding, a few healthy signs to keep you abreast include regular eating, regular pooping, regular shedding, being active (that is climbing a lot or resting on branches) during the day, clear eyes, mouth, and nose, smooth and healthy-looking skin (scales), and the absence of ticks or bugs.

The Chinese crocodile lizard also called the shinisaurus is a hardy lizard with well-developed limbs and a muscular tail marked with dark and light bands.

Its beautiful body color includes green with reddish markings along the neck and alternating light and dark bands, a robust head, and keeled scales.

The two bony scales running along its back and tail giving it ‘a crocodile look’ is the reason it’s given the name ‘crocodile lizard’.

This species of lizard is gender dimorphic which means that the males and females aren’t physically the same. While the females appear dull in color and smaller in size, the males appear more radiant in color, much larger, and beautiful.

Other than this, this lizard is relatively small in size. Its shape can best be described as almost square because its tail takes up 60% of its total body size.

It has a laterally flat tail which ensures excellent propulsion in water, a short head and wide neck strong enough to overpower and crush all kinds of invertebrates. Its legs are also powerful which makes it an excellent climber.

All these contribute to a healthy shinisaurus. Hence, if your lizard is appearing duller in body color or patterns than usual, or its limbs become too weak to encourage climbing and swimming, then it’s likely sick of Metabolic Bone Disease (MBD).

The Chinese crocodile lizard isn’t a large lizard as its name would suggest. The largest the lizard can get as an adult is 46cm (18 inches). As noted earlier, the lizard’s body is square-like in shape with the tail taking up about 60% out of the 18 inches body size.

Babies and juveniles would weigh even lighter. However, you can tell that your lizard is sick if it weighs significantly lighter than normal and hasn’t been feeding well for a long while.

A healthy Chinese crocodile lizard will give birth to live babies after a-nine to twelve-month gestation period without any complications. Since they’re viviparous with no parental care, the babies can fend for themselves immediately after birth.

On the contrary, a lizard that hasn’t reached full maturity in age and size will have difficulties giving birth and may need surgery or induce labor. This sometimes can affect the babies if not detected and treated on time.

One of such effects on the neonates is stillbirths. In some other cases, the babies are born weighing below normal. And because of this, they usually die a few days afterward.

Depending on the age, a healthy young shinisaurus lizard will eat at least once a day. Once your lizard gets to adulthood, you’re supposed to limit the amount of food given to it.

But if the lizard is sick of any disease, one of the signs will be loss of appetite. Thus, when your lizard keeps rejecting food for two to three days or more when the lizard isn’t bromating, run a medical check on it.

In addition, evaluate your husbandry to be sure every cage requirement is optimal.

Chinese crocodile lizards though semi-aquatic prefer the water to the land. They carry out most of their activities in the water such as sleeping, giving birth, shedding, and even pooping.

The color of their poops isn’t established as they poop inside the water area of their enclosure. You would only notice some debris which you should filter out of the water to keep the water clean.

Some species of lizards shed every month to keep healthy skin. The Chinese crocodile lizards don’t shed quite often. When they’re in the shed, you’ll see their skin in the water area of the cage.

Frequent shedding up to twice a month is a sign of underlying sickness that needs urgent medical attention.

As stated earlier, if you don’t make it a habit to examine your lizard at least once a week, you might not notice some signs of diseases or sickness until it becomes worse.

Captive Chinese crocodile lizards kept in appropriate environments will not have serious health issues. They would only develop health issues if their habitat isn’t kept to standard, especially the water area and humidity level.

The most common disease among them in captivity is bacteria and fungus infections which causes skin diseases. Signs that your shinisaurus is sick include:

Fungal and bacterial infections are often the most common diseases among Chinese crocodile lizards. Other diseases such as metabolic bone disease which are diet-related are rare.

What often lead to the breed of fungi and bacteria that causes infections are:

When either or all of these factors occur to their habitat, the air in their habitat becomes moist making it difficult for the lizards to keep dry when not in water.

When this happens for a longer time, it means that the lizards are always wet even when they aren’t in the water. The result of this over time is skin infection where their scales begin to rot.

Since this is the major health problem of captive Chinese crocodile lizards, preventing the disease from infecting your lizards is better and cheaper than cure.

Metabolic bone disease is another disease that affects captive shinisaurus. This disease is diet-related. It is characterized by low levels of calcium which leads to weak bones and limbs.

In the wild, aside from getting vitamin D3 from food, it is gotten naturally from UVB by exposing the skin to daylight.

Chinese crocodile lizards are temperate lizards. Thus, they aren’t known to sun bask in the wild. Even with this, in their natural habitat, they still do get the needed amount of UVB by exposing their skin to daylight. With this in mind, it’s best to provide them UVB bulbs in captivity.

If the UVB bulbs aren’t emitting the required amount of UVB needed for their survival, over time the lizard will suffer a lack of calcium which will lead to metabolic bone disease.

To prevent this, supplementing their diet with calcium and vitamin D3 is also very important.

To conserve these species for long term survival, captive breeding is encouraged since they are listed as endangered on the International Union for Conservation of Nature’s Red List (IUCNRL).

But sadly, determining sex among these lizards isn’t easy. They lack clear and obvious differences in sexual appearance. This makes the effort to conserve them through captive breeding strenuous.

Breeders who have successfully bred these pairs adopt a difficult but helpful approach of looking at their head shape, size, and colors. Like I said, this method isn’t 100% accurate and you’re likely to mistake males for females and vice versa. The males usually have brighter colors but not in all cases.

Although this method is not completely reliable because the numbers within the range tends to overlap between sexes, it is the only surefire method to tell their sex for now.

In a research conducted by Morris Animal Foundation, Dr. Tony Gamble, Assistant Professor of Evolutionary Biology at Marquette University, Wisconsin postulated a method of sexing Chinese crocodile lizards through genetics by determining their male and female chromosomes as with humans.

Although every disease discussed in this article can affect both babies and adults, baby shinisaurus seems to be more susceptible to fungal skin disease caused by poor humidity and ventilation than the adults.

In the wild, these lizards have ample air circulation at night when they sleep. However, in captivity, this cross ventilation is reduced especially if the enclosure doesn’t have openings to allow the free flow of air.

Poor enclosure set up like this coupled with high air humidity increases their chances of getting fungal skin infections.

Health concerns are not diseases. Rather, they’re signs and symptoms that indicate an underlying sickness or disease. The importance of understanding some of the health concerns is to help you identify any health issue on time before it gets worse.

Some of the health concerns are:

However, if you don’t know how to do it, you can take it to your vet to avoid complications.

Your lizard can refuse to eat for natural reasons such as brumation and breeding. Aside from these natural reasons, any of the aforementioned diseases can cause loss of appetite.

When your lizard isn’t eating as supposed to, the next sign will be a drastic weight loss.

Once you notice these signs, you have to evaluate your husbandry to identify where the problem is. Once the cause of not eating or weight loss is identified, address it as soon as possible.

Yes, they can die of old age if well maintained in captivity. But it is hard to tell if they die of old age in the wild because of their endangered status caused by deforestation.

In captivity, they have been recorded to live up to 15 years. Since their body will depreciate with age, it’ll be right to postulate that they do die of old age just like every other living thing.

From our discussion in this article, it is obvious that the most common disease in captive Chinese crocodile lizards is poor husbandry. Other than this malfunction in their husbandry, they wouldn’t get sick so easily.

Having this in mind, the best way to treat them of any disease or illnesses is to prevent it from occurring. This means that, for you to prevent bacterial or fungal infection, you must ensure that their enclosure is well ventilated.

Also, ensure that the humidity level isn’t raised above normal. In addition to this, supplement their diet with calcium and vitamin D3 even when you provide them UVB lights.

This will ensure that they get the required calcium they need for strong and healthy bones. In sum, if your lizard falls sick of any disease or infection, it is best you take it to the vet for proper diagnosis and treatment.