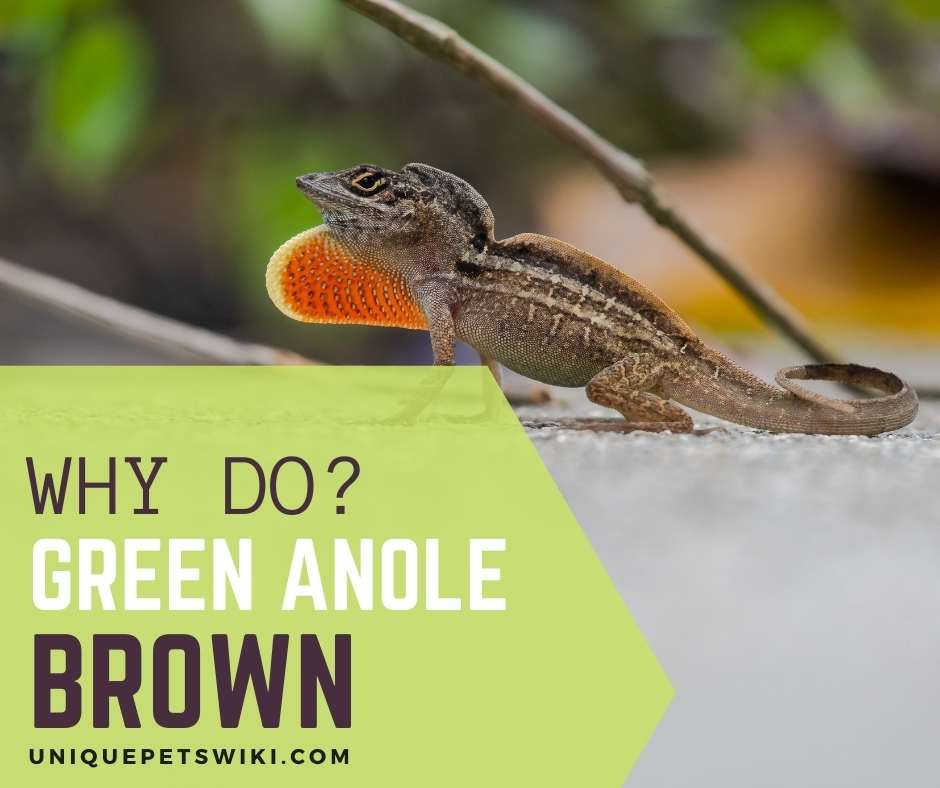 Green Anole is famous as Anolis Carolinensis, American Green Anole, anole, chameleon, Carolina anole,  and red-throated anole. They are a type of anole lizard resident in the Southeastern United States.

As people have started petting this anole, they always ask why my green anole brown?

The reason for posing such a question is that anole changes color, especially brown from green naturally. Thus, many people understand it like a chameleon in the United States, especially in Texas, although it is not.

As a result of such misunderstanding, they stop keeping the green anoles. This article will explain everything you want to know about color changing in green anole, green to brown.

Even though green anoles are not chameleons because chameleons exhibit many colors with adaptation, they change colors.

In other words, unlike the chameleon, the common color range in anoles is that they can become from the heaviest and brightest green to the darkest brown or bright emerald to dark brown.

There can be a little difference or variation between these two colors.

Moreover, they can turn to baby-blue Carolina and yellow anoles.

Although these two later colors are very rare, they are still capable of changing into them.

What does it mean when my green anole changes its color to brown and why so?

When green anoles change their color, there are many meanings to that context.

You can conclude that your green anole changes color because of variation in mood, stress level, activity level, and social dominance.

Besides, you can also infer that they do because of camouflage, which is the color or settings of the background. Though, there is not any proof that substantiates this prevalent point.

Like camouflage, there is a common view that temperature, which refers to thermoregulation, is also the source of color change.

You may be wondering how stress levels cause anoles to become brown? When anoles feel stressed, they remain green and fall asleep at night. However, in the very morning, you will find them brown.

These stresses can be of various types, but there are two that are common.

First, they may encounter environmental stress. It can occur because of either hotness or coldness of the environment or habitat and the starring of cats while you are not attentive.

The second is the psychosocial pressure. When you keep two or more anoles, there are chances that your anole changes color.

Anoles do change colors, and there are multiple meanings to them. You may ask,  “is the change in color natural to them?”

There is a color spectrum because of three layers of coloration cells whose common names are chromatophores.

The first is xanthophores which produce or cause the yellow coloration.

Then, there are cyanophytes which are accountable for blue pigmentation.

Finally, melanophores are responsible for both black and brown coloration in the anoles.

If there is a lack of any of the above pigment genes, there occurs color changing. Because of these mutations in colors, three phases become apparent. First, the lack of xanthophores causes anoles to become blue-phased Carolina.

When anoles entirely lack or are devoid of xanthophores, they are axanthic and will be completely blue.

However, it is very rare because, in 20000 anoles, only one appears to be baby-blue hue. Secondly, when they have fewer cyanophora, they become yellow-phased Carolina anoles.

There is the availability of such anoles. However, they can hardly survive because they are not green anymore since the green color used to work as camouflage for them against predators and prey alike.

Finally, the lack of melanophores is responsible for the brown color.

In other words, your anoles become brown because of the lack of these pigmentation cells.

Is it dangerous if my green anole changes its color?

Green anoles are peaceful animals. Thus, humans do not have any type of fear of them even if they change colors, from green to brown and vice versa.

They work as pesticides when they eat insects like cockroaches, flies, beetles, crickets, and grasshoppers.

In other words, when they change green color into brown, they do not seem to be like green trees.

Thus, predators like birds, dogs, cats, snakes, lizard cuckoos, and American Kestrels can easily identify or track anoles and then munch or relish on them.

In addition to fall to prey, anoles become lethargic when they change color. In other words, they are very active in green color.

If there is high stress or activity, anoles will turn brown, thereby leading to laziness.

How long will my green anole change the color to the origin?

Green anoles can change the color to the origin in multiple scenarios.

First, there are male to male aggressive encounters. When males fight with male anoles, there is a frequency of change in the color.

Remember that it is the usual scenario, not a hard and fast rule that in every fight, they will change colors.

Then, the environmental issues like humidity, sophisticated enclosures with too hot and too cold temperature, and psychosocial can cause anoles to turn brown.

When you make sure that these issues get resolved, you will find your anole turning green in the very morning after sleep.

In short, if you remove the issues or hurdles that make them turn brown, your anoles will get back to origin color.

Green anoles often make great pets due to being harmless, friendly, insectivorous, changeable in color, and so on.

Although they are native to the Southeastern United States, especially Florida, you can get them anywhere in the world through the pet trade.

In the US, people also refer to green anoles as the chameleon, for they change color.

Though, they do not possess a variety of coloration like a chameleon does. You should not get worried while your anoles are busy. The problem occurs when they stop doing anything. As a result of this, they turn brown.

You cannot deny the fact that coloration or pigmentation is natural in the green anoles.

Cells like chromatophores, which are of three types, cause coloration. Green anoles are not as dangerous because they do not cause any harm.

While they change the color, they damage themselves by falling to become prey.

However, you can avoid the damage by making them change the color to the origin. You can do it by tackling the psychosocial and environmental issues for them. In this way, you will make a great pet lover.