If your guinea pig’s frequent bathroom breaks are what’s brought you here, we have good news.

This behavior is quite normal for cavies. In fact, one Cambridge University study found that a guinea pig’s digestive system is the fastest and most efficient in the rodent family.

By the end of this article, you’ll understand what causes a guinea pig to poop so frequently and how often you can expect them to do their business.

You’ll also be able to identify a healthy cavy poop from an unhealthy one, factors that affect how they eliminate, and care tips that will make you a guinea pig poop expert.

Why Do Guinea Pigs Poop So Much?

Guinea pigs poop a lot because they also eat a lot (amount and times). There’s no need to panic if your guinea pig is pooping consistently and leaves pellets almost everywhere it goes. This is nothing out of the ordinary and considered natural for all rodents.

The total amount of poop a guinea pig will produce in a day varies from one cavy to the next and is mostly dependent on factors like diet and lifestyle. Generally, you can expect about 100 droppings a day or more.

With so much to nibble on, they’ll spend a majority of their day eating. Throw their impressively fast-working stomachs into the equation and you have the perfect solution for a sizable amount of guinea pig poo.

If your guinea pig poops more frequently, it may also be eating more than usual. Their gastrointestinal tract is known to digest food materials at a fast rate, meaning their bodies will have no problem excreting any amount of food as quickly as it was consumed.

How Often Do Guinea Pigs Poop?

Guinea pigs do not obey a bathroom schedule. Instead, they will poop throughout the day, anytime and anywhere they please.

Unlike most animals, cavies do not have regular pooping patterns and will discharge feces whenever they feel the urge. This means that whether your guinea pig is in its cage or exploring your home, you’ll likely find pellets in its trail.

In addition to the staggering amount of feces a cavy can produce, many new guinea pig owners are shocked to find that their pet will also eat its own poop. This may seem disgusting to humans, but to guinea pigs, this behavior is very healthy.

Guinea pigs are members of the coprophages family, and one of this group’s most distinguishable characteristics is a nutrient deficiency that drives them to eat their own droppings.

They’ll consume almost as much poop as they excrete each day, but it’s nothing to stress over. It’s very beneficial to their health, and it means that you’ll have less to clean up.

Factors That Can Affect a Guinea Pig’s Poop

The frequency and quality of a guinea pig’s poop are determined by many factors, the most important of which are its exercise levels, age, diet, and weight.

If your guinea pigs spend a lot of time outside of their cage to play with their buddies or wander around, their bodies will become tired more quickly and try to recover lost energy by increasing their digestion rate.

This will result in the guinea pig receiving its essential nutrients and passing waste from the body much faster and more often.

Physiological factors such as stress and fear can also increase how much a guinea pig will excrete.

A healthy guinea pig poop is identified by:

If you notice that your guinea pig’s poop has a strange consistency, stinks, has an odd color, or appears to be bloody, it could indicate an improper diet, a gut problem, or a viral infection.

Make sure your guinea pig is getting enough hay and water. Reducing the number of fruits or other sensitive foods they consume can also prevent further issues. If the poop problems persist, we highly recommend a vet visit.

When Do You Need To Worry About Your Guinea Pig Pooping Too Much?

Frequent pooping is completely normal for guinea pigs and directly correlated to how much food they eat. Cavy owners should be more concerned when their pet isn’t pooping enough.

If a guinea pig’s pellet count is 50 or less a day, it could be a sign of stasis. This GI tract condition happens when the intestines are not contracting properly and might be one of the first indications of a more serious problem.

You can prevent stasis by adding more fiber to the guinea pig’s diet through an unlimited amount of fresh hay. If you notice that your guinea pig is eating and pooping less and showing signs of discomfort, you’ll want to schedule an appointment with your vet immediately.

How Do You Make Your Guinea Pig Poop Less?

It is possible to help your guinea pig poop less, but it’s not necessary. A guinea pig’s body is designed for food to move through it constantly, so your attempts to make them poop less probably won’t work. It could become unhealthy for the guinea pig over time.

Adding more fresh vegetables like carrots to their diet can also reduce how much they poop. Be careful not to feed them too much! Carrots are a source of carbohydrates for guinea pigs, which contain a lot of sugar.

Excess of sugar can promote the growth of gas-producing bacteria and disrupt their intestinal system.

You do have the option of training your guinea pig to use a litter box, but this process requires time and a lot of patience.

If this is something that you’re willing to try, start by placing a small and sturdy litter box in a dark space inside their cage.

Cavies are instinctually conscious of where they urinate since the smell can attract predators, and dark places are their favorite spots to take care of business. To help your guinea pig remember to use the litter box, mix the litter with fresh and old bedding to retain its scent.

It usually takes several months of training before a guinea pig will regularly use a litter box, so don’t get frustrated and be understanding with your pet. 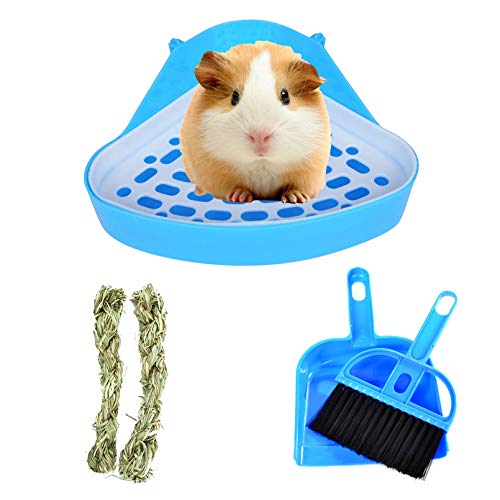 Cleaning up poop isn’t the most glamorous part of being a guinea pig owner, but it’s certainly one of the most important.

Leaving feces in a guinea pig’s cage for too long can be hazardous to their health. Since they drop around 100 pellets a day, you’ll have a lot of poop to keep up with.

It’s recommended that you clean your guinea pig’s enclosure at least once a day. If you have more than one cavy in the same enclosure, cleaning will need to be done several times a day.

The quickest and easiest way to clean your guinea pig’s cage or droppings around the house is with a handheld vacuum. Make sure it’s not too big! You don’t want to suck away everything inside their cage.

Before you begin, remove your guinea pigs from the enclosure and place them somewhere they’ll be safe and comfortable while you clean, preferably away from the noise.

If you use hay in their home, brush it off to the side so you can remove as much poop from the cage as possible.

Be sure to take your time and do a thorough job. It shouldn’t take longer than a few minutes. Cleaning guinea pig poop with a scoop or a small broom and dustpan requires a little more time than a handheld vacuum but will work just as well.

How much should a guinea pig poop a day?

This varies from guinea pig to guinea pig, but expect them to relieve themselves consistently throughout the day.

How much poop is normal for a guinea pig?

Approximately 100-150 droppings a day is considered average. If your guinea pig is pooping less, you may want to book a vet visit.

How do I stop my guinea pig from pooping everywhere?

You can’t, but you can encourage them to use a litter box or feed them slightly less so they produce less poop.

How often should you pick up your guinea pigs poop?

At least once a day and more if you have multiple guinea pigs. A handheld vacuum will make quick and easy work of this chore.

Why do guinea pigs eat their poop?

Guinea pigs are coprophages, which means they consume their own waste to get necessary amounts of fiber, vitamin C, and vitamin K. Some experts believe a sick guinea pig can be cured by eating a healthy guinea pig’s droppings.

Guinea pigs are frequent poopers and can produce up to 150 droppings a day. They’re known to do their business consistently and without warning, but some factors can affect how often they poop including how much they eat, their lifestyle, and age.

It’s possible to control the frequency of your guinea pig’s bathroom breaks, but only to an extent. If you want to clean less poop, reduce how much food you’re giving it or train it to use a litter box.

When cleaning the feces that your guinea pig has left behind, the best and fastest method will be using a handheld vacuum, but a scoop or small broom and dustpan will also get the job done.

Be sure to clean their cage at least once a day to keep your guinea pigs’ healthy and happy.

9 thoughts on “Why Do Guinea Pigs Poop So Much?”