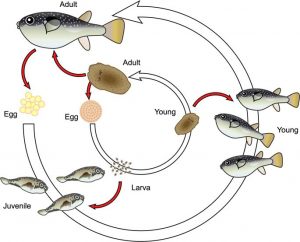 Want to know about the life cycle of a puffer fish?

The majority of the Pufferfish have open life stage. The males slowly push the females up to the water’s surface to spawn. Pufferfish eggs stay in water for one week(5-7days) before they hatch. The female can lay three to seven eggs each time.

Which is we will have in another article soon.

Once they have hatched they have functioning eyes and mouths.

They have to feed within a few days otherwise they will die.

However, they do have a shell that surrounds them each is hard, and protective.

This shell layer will stay on them until they reach the age of two years old.

After they have hatched they are known as “fries”. Looking closely at them (usually under the lens of a microscope) one may see the shape of a puffer fish in the early stages.

Within a few days their shells will slowly break off, but not completely.

In this stage they will develop their fins, teeth, and the rest of their body.

They can grow up to two and a half cm making them very small. However, they are rather cute at this stage.

This is the final stage of their life cycle. Here they are fully formed and ready to take on the world of water.

They are able to swim back to and join their school if they are the type of breeds to do so.

Since there are so many different breeds of puffer fish their final size can be in the range of about 2, 54 cm to about 67 cm.

The latter is the Mbu puffer fish which is a pet not for the faint of heart, but a beautiful creature to marvel at, at home.

Puffer fishes do have mating. The mating habits of the puffers are rather unique.

When the female is ready to spawn her eggs the male will guide her to the surface to a certain spot where they are safe.

Here, she will lay three to seven tiny, circular eggs.

These eggs will be on the surface for about a week before they hatch.

They are very light, so they can stay there without the fear of them sinking. The male may look over them during this week.

The freshwater puffer fish (like the Spotted Congo Puffer) have a slightly different mating ritual.

The male attracts the female usually by puffing out his keels and crests.

If she is interested she then will swim to a section of plants or moss, or any form of cover to lay her eggs.

The male could be willing to help her by simply rubbing against her.

Once she lays the eggs, the male will fertilize them.

Another interesting mating habit is brought to us by the freshwater white-spotted puffer fish.

In order for the males to stand out and grab the attention of a female, they will dig and make a circular pattern in the sand of the river.

These are often compared to alien crop circles. If the female likes it, then they can mate.

Plus, this sand circle formation is also used to protect the eggs for threats and rough water.

Other Facts About Puffer Fish

Puffer fish are interest not only because there are many types in the world but every breed has different requirements.

Plus, every fish has a different personality.

However, few freshwater puffer fish cannot share their space with other fishes.

They may end up eating them or in the case of dwarf puffer fish they could be the last to get to the food. Hence, starving to death.

Certain breeds of puffer fish such as Figure 8 Puffer as well as the Green Spotted Puffer can start off as freshwater types.

However, as they age they develop into brackish or saltwater fish. This is important to note in case you would want one as a pet.

Plus, every puffer fish can move their eyes independently of each other. This could be a way to watch out for threats in the water. Their scales are quite strong in order to give their body protection.

Plus, their jaws look as if they are strong and leak-like.

This is great for them to eat coral as well as invertebrates.

Some puffers can also change their color if their environment changes.

Food is important to any type of fish.

The amount of food depends on how big they are or can get as well as what species they are.

However, the majority of them are meat-eaters.

For example, saltwater puffer fish can eat worms such as earthworms or blood worms.

They can also live on crabs, mussels in their shells, and squids.

Freshwater puffer fish have a slight addition to their diets in the form of shrimps and snails.

The reasoning why many breeds of puffer fish like to eat, and they should eat, hard-shelled food is because it slows down the growth of their teeth.

If their chompers get too big and long then they would be unable to open their mouths to chew their food.

This will result in their death due to starvation.

While puffer fish would make wonderful, fun, and interesting pets, but some of them are poisonous.

They are viewed as the most poisonous vertebrates just behind the golden poison frog.

This poison can be in their livers, intestines, testes, ovaries, and sometimes on their skin.

The liver and ovaries have the most amount of poison while their skin, blood, and intestines, have the least amount.

This poison may be able to paralyze people.

This toxin cannot be undone by being cooked or frozen.

If someone does try to freeze of cook a puffer fish before they remove the organs with the toxins then the poison can spread to the rest of the fish, making it heftier.

Some eggs are also poisonous.

However, Japan still views its meat as a delicious delicacy.

There are top chefs who know what parts to cut out in order to not poison their guests.

Plus, many Japanese farmers grow puffer fish and find them certain diets in order for the poison to not get into their system.

This is because the poison that is in their systems actually comes from them eating a type of toxin that is found on natural algae.

Therefore, if the puffer fish is raised in an aquarium then there is a high chance that they will not be poisonous.

The life cycle of a puffer fish is fairly simple.

They have three stages: egg, fry, and adult.

Their mating habits are fairly interesting and some breeds can even create wonderful works of natural art.

The puffer fish are interesting creatures that would make great pets as well as being a great item to the natural environment.