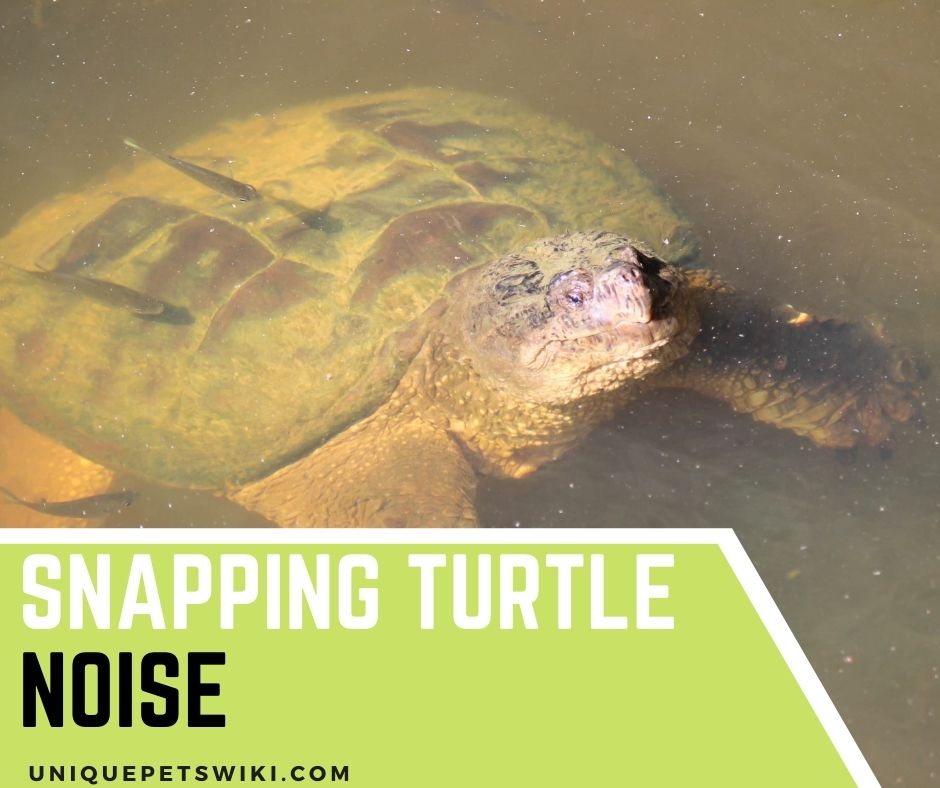 “Snapping Turtle Noise!” What noises do snapping turtles make and why? If you’re experiencing this now and you want to know why, you’re at the right place. Read on to learn more.

You just spent the better part of your morning feeding your snapping turtles. You notice that they are all making strange noises with their snouts. Snapping their jaws rapidly back and forth, almost as if they are speaking to one another. You can’t help but wonder if they’re planning something big!

In this article, you will learn about the different sounds they make, and the meaning behind each of them.

Snapping turtles are not known for their vocal prowess. They do not vocalize very widely. They are usually silent and prefer to avoid confrontations, but when it comes down to their nature of being a wild creature they will hiss or snap at things that threaten them.

Their hiss is loud enough that it commands respect. The loud snaps from them can sometimes even make you jump in fear or surprise because of how quick they come at things with jaws wide open followed by an eerie silence before another snap closes them again.

Sometimes, male snapping turtles seem like they are singing because of the high-pitched noise they are making. You will see them with their head and neck stretched out above the water while producing the sound, giving them an erect posture that’s unique to see!

On the other hand, female snapping turtles make the same sound during the nesting season, but only when they are in or near water.

Snapping turtles do not have an eardrum or tympanum. They can’t hear well compared to other species who have. But this doesn’t mean they are not able to pick up lower or deeper sound frequencies and vibrations. They can, both on land and in the water.

Snapping turtles are one of the more aggressive species. They can make hissing, clicking, and honking noises that often come out sounding like a roar when they’re really irritated or even afraid for their safety. It’s best to stay away from snapping turtles unless you know what kind of sound it is.

Here are the common sounds that turtles make:

The snapping turtle is a slow-moving animal with powerful jaws. When threatened or approached, they make a hissing sound in anger to command respect from others of its species that are nearby.

They do not have vocal cords, but they still make a wide range of noises and sounds. Some are audible to humans while others aren’t even in the range that we can hear.

All sounds they make are the result of air being forced out of their lungs and into whatever orifice it’s escaping. Here is a list of sounds Snapping Turtles can produce:

What Does It Mean When Your Snapping Turtles Make Noise?

While other creatures express themselves through vocalization, snapping turtles have distinct ways of alerting others to their feelings.

When stressed or angry they will hiss out loud in order to warn predators and passersby that you are not welcome around them if something should happen.

The interesting thing about this habit is how they may use noises differently depending on what emotion dictates their need at the time.

Here are the 4 most basic causes of their noise:

Snapping turtles are commonly known for snapping off the heads of predators with their powerful jaws however snapping turtles make hissing sounds as a sign of fear. They produce this sound which is known to be very loud each time they are approached for close examination.

Snapping turtles, though they may seem like a threat because of their large size and intimidating demeanor in the water, they only snap when threatened. As a sign of fear, snapping turtles make hissing sounds.

They often react this way when they feel threatened by humans and try to escape- if cornered or trapped, snapping turtles will defend themselves by flailing and biting with their powerful jaws.

To calm a snapping turtle in fear, submerge him into water. Once fully submerged, keep holding him until he lets go of his grip. This gives him enough time to calm down.

If you need to remove the snapping turtle from the water, you can grab onto his shell behind the neck while pushing him away from your body. A space between the two of you has to be observed before releasing any grasp at all.

One of the most dangerous illnesses a turtle can catch is a respiratory infection, which basically means they are having trouble breathing or making wheezing noises when out in the water. Bubbles come out of their nose due to this illness and it manifests itself by emitting bubbles when it is not in the water.

Because it is breathing through the mouth because of an injured nose or damaged airways. This is how it draws oxygen into its lungs. If you hear this sound, get your snapping turtle to the veterinarian immediately.

The mating turtles in the wild make a variety of noises to attract and court one another. You can hear them blaring, hissing or growling. The higher-pitched vocalizations may surprise you, but it’s what they sound like when ramming their shell together. It makes for an incredible “clacking” noise.

When it comes to their selection process, the male snapping turtles are looking for a very specific sound from the females. According to experts, the male turtle’s ear canal leads straight into his shell. What he hears is what’s touching his shell – and therefore exactly what he’ll hit again and again.

The farmers should not worry when they hear this high-pitched noise. It is not dangerous to their farms as it is a sign that the mating ritual has begun.

The snapping turtle’s hissing is also the result of a threat display and not meant to be harmful, but it can cause you some alarm. The rapid extension and retraction cause air bubbles around their neck creating this shrill noise which serves as a warning sign when predators hunt them down.

When your snapping turtle is threatened and makes a hissing sound, keep a safe distance between you and your pet as it may react badly to noise or sudden movements. These could scare them and cause injury to the turtle, but also their human counterparts.

Do not attempt to force them into water, as they need time to adjust. Do not attempt to approach or feed the snapping turtle, as it can cause them to lose their natural defensive instincts and attack the next person who comes near their territory.

What is the sound of a turtle?

Researchers have found that turtles make a variety of sounds, depending on the situation and why they’re making noise. It’s believed these aquatic animals can also produce underwater noises too.

What are some interesting facts about snapping turtles?

Snapping turtles are omnivores and they have the scientific name Chelydra serpentina. The word “serpentina” refers to its long tail while “chelydra” originates from the Greek word meaning “tortoise”.

Do snapping turtles have teeth?

Snapping turtles don’t have teeth. But their robust beaks can easily pierce through prey in the wild like rabbits or ducks for instance. And when threatened, snappers will use these pointed bills as weapons to defend themselves.

Snapping turtles can be found in freshwater ponds, streams, and rivers throughout the United States of America.

Snapping turtles have a reputation for being aggressive reptiles that will attack anything they perceive as a threat to their territory or themselves, but this is mostly untrue. Snapping turtles are not typically noisy animals.

However, snapping turtles do make noise when threatened by predators such as humans who try to take them out of the water against their will – especially if they are handled carelessly while doing so.