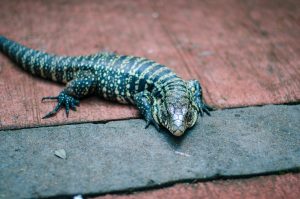 The color of the scene reptile is very beautiful. With an extremely beautiful appearance, quiet personality, no need to spend time with them.

Domesticated reptiles also have a sense of accomplishment. Moreover, they prefer a clean environment, relatively easy to organize. What is more, the police reps are extremely cheap, reasonably priced for everyone. For inexperienced reptile lovers, which scene should I choose?

Our suggestions are based on price, easy to raise and long life.

Look! Blue Tongue Skink has a large blue tongue that protrudes out from time to time.

Very attractive to the eyes of others. The character of the vivacious green tongue lizard is easy to tame. A species of ornamental lizard suitable for beginners. If properly raised can live more than 20 years.

This lizard originating from northern, eastern and southeastern Australia.

Pros of having Blue Tongue Lizard

Cons of having Blue Tongue Lizard

Having a bearded dragon, you are having a dog in reptile life. Beared dragons are good-natured, a beardie is unlikely to bite and will give you a warning by puffing up his beard if annoyed. They also have their own character, which makes owning one a lot of fun.

The Bearded Dragon shape bears the symbol of desert reptiles. BD dragon has big head, big belly and strong body. It has a line of thorns running along the edges around its abdomen and on its back. In addition, the thorns on the cheeks gave it a unique name – “Bearded Dragon”.

You are assured because the nature of Bearded Dragon is sociable, friendly from the beginning to adulthood. It hides a gentle identity with a majestic coat of thorns. Therefore, since the 1990s in the United States, it has been considered best start lizards, sought by many households. But it was not until 2010 that Vietnam introduced this hobby.

Pros of having a bearded dragon

Cons of having a bearded dragon

It have been a popular pet species in the United States for the past 30 years. They are famous as lizards with many colors, patterns, sizes, especially they are quite easy to breed and suitable for those who like to keep lizards indoors.

Leopard Gecko usually have yellow, white and have black spots on the body at birth and they develop into long black stripes after development. Leopard Gecko also has a number of different colors and patterns so often called morphs with different Leopard Gecko lizards will have different prices but they are not too different.

Pros of having a Leopard Lizard

Cons of having a Leopard Lizard

Chameleon can change the color of its body based on its environment, blending into the surrounding environment. This type of physiology changes color, there is a theory that it is under the control of the plant nervous system, through the dilation or contraction of pigment cells inside the skin layer to complete, in addition In other words, Chameleon relies on the regulation of nanocrystals in the outer epidermis, through changes in light refraction, is a magical animal.

There are many types of Chameleons and depends on how it’s popular, the price will be different.

But in general, Chameleons are colorful, yes, it’s colorful!

Pros of having Chameleons

Cons of having Chameleons

Green Iguana is a vegan animal, the appropriate feeding temperature for them is about 90°F, the highest not exceeding 35oC. Humidity is about 60% -80% and up. The growth rate of Green Iguana is very fast. Green Iguana can grow up to 2m long.

In addition, Green Iguana will lose its tail to protect itself, so when it is caught they do not season its tail.

For some reason, an iguana, in general, is one of the worst lizards for beginners. So, check the article to see if you are suit for it or not. But for green iguana, you can consider it is a good iguana for the starters

Pros of having Green Iguana

Cons of having Chameleons

There are quite many reptiles you can refer to and choose to keep as pets. However, they are still domesticated wildlife.

You need to spend a lot of time with them to play and understand their habits so that their best physical and mental health.

Beside that, there are some reptiles that very easy to care for such as blue tongue skinks

Above is our suggestion of the top 5 reptile to raise, hopefully can help you have a better view of your needs as well as your ability to breed reptiles.