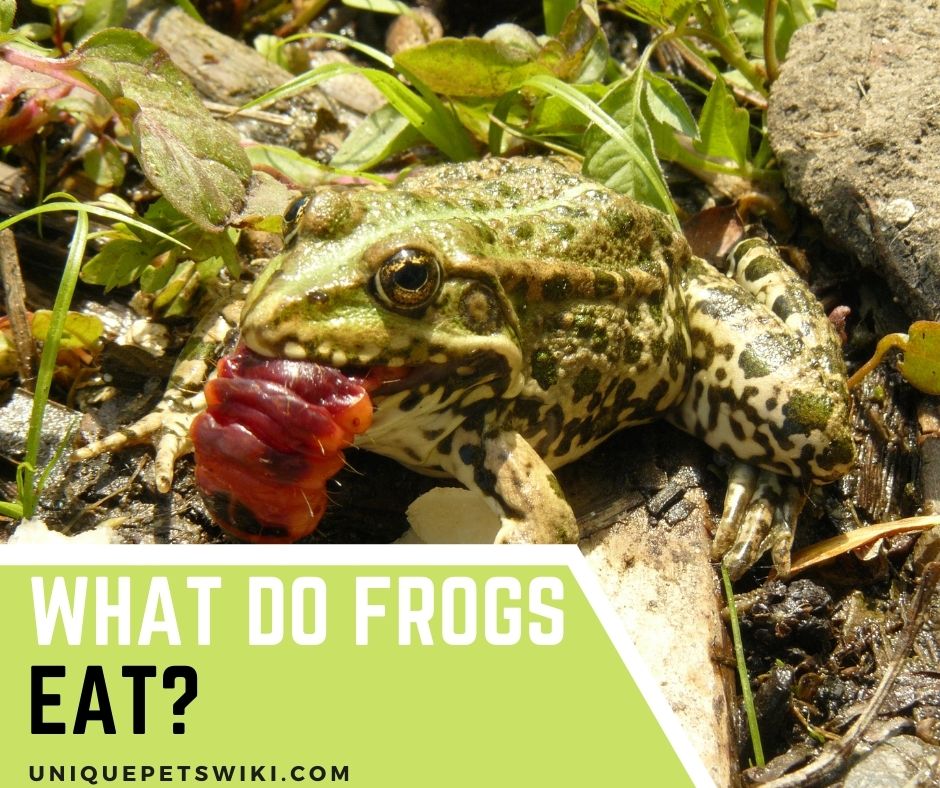 If you’re new to keeping frogs as pets, it’s not surprising that you want to know what foods you can feed to your frogs. For every new pet owner, it is crucial to know what that species of animal eats in the wild and captivity before bringing it home. Unlike dogs, frogs cannot consume pre-packaged foods. Hence, the question, “What Do Frogs Eat?” A quick answer is – wild frogs survive on a vast range of insects in the wild.

How can such amphibian enthusiasts enjoy the company of frogs when their diet remains a mystery? This article relays the essential information on the diet of frogs, how to properly feed them, how they prey on food, and what to avoid in feeding practices.

What Do Frogs Eat?

In the wild, frogs are opportunistic feeders that will consume any living thing that fits in their mouths. While crickets are the most frequent food for frogs, grasshoppers, locusts, mealworms, and, for certain bigger species, tiny mice, should also be included in the diet. Providing proper nutrition for a carnivore will require a bit of work and careful planning.

Small frogs eat insects namely flies, moths, snails, slugs, and worms they come across. To catch their prey, they use their long tongues and sticky saliva. Wild tadpoles eat algae and other soft plant matter in the ponds they grow in. Pet tadpoles eat algae wafers, bloodworms, and fish food.

As a frog grows, its nutritional needs and food consumption rate also change. In some cases where the food is usually unavailable or the environment is not conducive for food production, they might even eat their fellow tadpoles.

The diet of baby frogs varies from the adults. Most tadpoles adapt to a herbivore diet in the beginning and later transition to become omnivores. Their food and prey change as they grow.

How To Properly Feed Baby Frogs?

Growth requires a lot of energy. Baby frogs have a high metabolism, hence, they need to be fed multiple times a day. They continuously hunt which increases their chances of survival.

Froglets under the age of 16 weeks should be fed every day. The feeding depends on the species but generally, baby frogs are recommended to be fed twice a day, offering five to ten insects per feeding.

Note: Keep minimal contact as possible during feeding as the oils in human skin can upset the mucosal layer frogs have on their skin.

To keep healthy, all adult frogs require a regular diet of fresh or alive insects; however, certain frog species also require small vertebrates and/or fish. Frogs are diverse, and thus, the feeding schedule depends on the species, size, age, total in the group, and breeding status.

The diets of pet frogs are different from wild ones. Pet frogs generally eat small insects and bugs. Because they are not scavengers, they cannot recognize dead bugs.

Crickets, mealworms, hornworms, waxworms, flightless fruit flies, grasshoppers, and pinky mice (for larger frogs) can provide your pet with all sorts of nutrients, especially protein. These insects can be locally sourced from pet stores or ordered from websites, and they can also be produced at home.

How to Properly Feed Adult Frogs?

Some species such as dwarf frogs have a high need for energy. They require live food items at all times. Others including the White’s tree frog are more sedentary and only require feeding a few times a week or every other week.

The inclusion of different small insects promotes and provides variety. Live reptile food from local pet stores may also be given. Generally, they may consume five to seven crickets or small insects several times a week.

The feeding schedule depends on the size. Smaller ones should eat more often (every two days) than larger sizes (every three days).

For vitamin and mineral supplementation, planning a diet with adequate amounts of nutrients is highly advisable. A variety of live gut-loaded insects, ones that spend more than a day feeding on vitamin-rich foods (i.e. sweet potato and commercial gut-load food) can be included in every other feeding.

Another method of supplementation is dusting the prey with adapted supplement powders containing vitamin A, vitamin D, or calcium.

Frogs are susceptible to obesity due to overeating. They will eat until their food supply declines which help develop general health complications. To administer proper feeding, serving mice and other calorie-dense items must be moderated.

Insects smaller than the width of the head must only be provided to avoid impacting their intestines. The live insect must measure no longer than the distance between the frog’s eyes which is  between 1 to 2 cm for adults.

To complete a healthy meal for frogs, fresh, clean, and dechlorinated water must be included. Unlike humans, they intake water through osmosis or absorption through the skin. Hence, it is  important to maintain the right balance of water in your tank and ensure that it is free from harmful elements.

It is beneficial to ensure that a section of the frog’s habitat, may it be a garden or pond, develops wild and is full of native plants to attract as many live insects as possible. Ensuring adequate space for shelter will also increase amphibian visits.

How Do Frogs Hunt and Eat Their Prey?

Wild frogs usually remain motionless and hide from their prey. They wait for a proper time before they pounce on and ambush their food. To catch prey, the frog’s sticky tongue flips out of its mouth, attaches to an insect or bug, and reels it in.

Most species only grow teeth on the upper jaw so frogs do not usually chew. When the prey reaches the mouth, it is then directly swallowed whole. This movement is so sudden that the victim is often unable to escape. A frog’s tongue can return to its mouth in 15/100 of a second.

For frogs that lack a long, sticky tongue, will entrap their food with their front legs. They will arrest the prey with their front feet and stuff it into their mouths before it can escape.

Foods To Avoid For Your Frogs (Pet Frogs)

The human diet is not suitable for frogs. They cannot eat processed foods such as cat or dog food, cheese, ice cream, tuna, beef, chicken, ham, butter, and spices. These will choke them or may contain harmful additives.

They must not be fed wild-caught or dead bugs. Table scraps, commercial pet food for critters, and live prey larger than them are not advisable as these pose a risk of pesticide or parasite exposure.

If frogs were found or observed in yards or ponds, chances are they have already found lots of food. Slug pellets should not be used as these may harm them.

Frogs are carnivores that eat live, moving food. Thus, human food including lettuce is not adapted to frogs.

How long can a frog go without food?

It depends on the age, species, and weight of the frog. Adult frogs do not eat as much as babies. They can survive for extended periods (3-4 weeks) without feeding if their habitat is clean. However, long-term survival requires the consumption of 10-12 full-grown crickets two to three times a week.

How do you tell if a frog is a female or male?

Based on appearance, female frogs are usually bigger and heavier than males. This is because they are responsible for holding the eggs. Male frogs croak to attract females and call for potential breeding. Their skin also has a different color from their belly which is often yellow or black.

Moreover, Male frogs also have small and coarse patches on their hands, particularly on the insides of their thumbs. They usually have rougher or spikier skin than females. Males and females have nearly comparable colors but in some species, males are lighter.

With the basic knowledge of what a frog needs for optimal health, a complete and healthy diet can be planned and successfully adapted. Doing so will ensure the good health of the pet frog and prolong the time to be spent with it.