Guinea pigs are considered one of the oldest and cutest domesticated animals worldwide. They are very sociable and pleasant to keep, and both children and adults can keep them.

As a new or old guinea pig owner, you may be wondering where this cute pet originates from.

Guinea pigs originate from South America. They were domesticated as early as 5000 BC, and they form part of the culture of the people in South America; you will find their statues dating back to 500 BC in the area.

In this article, we will help highlight everything you need to know about where guinea pigs originated, from how they got their name to their preferred habitats in the wild.

Where Do Guinea Pigs Come From?

Guinea pigs are among the oldest domesticated creatures out there. Although they are called guinea pigs, they are neither from Guinea nor are pigs. They are rodent species that originate from South America.

They are commonly found in the Andes, a western part of South America now known as Bolivia and Peru. Guinea pigs were domesticated as early as 5000 BC, and they are known to form part of the culture of lots of the people found in the area.

In the wild, guinea pigs prefer to live in grassy flatlands, rocky hillsides, and edges of woodlands with lots of vegetation. You will find them living in holes that belong to other creatures or burrows created in the thick vegetation.

Although they are diurnal in captivity, they are usually active during the night in the wild. This helps them avoid predators like birds and look for food in the wild.

After domestication, guinea pigs are reared in the area for food. They were presented as gifts, and some people kept them as pets for their kids.

Do Guinea Pigs Exist in the Wild?

Nowadays, most guinea pigs kept as pets are domesticated. It is quite hard to find those from the wild. However, guinea pigs still exist in the wild, and you can find them in South America, especially in Uruguay, Argentina, and Brazil.

A common wild guinea pig is the montane guinea pig. It can be found in South American Andes mountains and can reach 9.7 inches long.

Furthermore, wild guinea pigs are usually more attentive to their physical environment, unlike their domesticated cousin.

You will be surprised that this rodent is called guinea pig since they do not originate from Guinea nor are they pigs.

However, many believed they were named guinea because they were quite unique during those times, and Guinea refers to their foreign and costly nature.

It usually costs a Guinea or 21 shillings to buy them; this was a large sum in the 16th century. Another hypothesis was that guinea pigs were imported through French Guiana.

They were called pigs because they love feeding constantly and are vocal, just like a pig. Like pigs, they also have a big head, round and long body, and short neck and legs.

Some countries in Europe also call them Sea Pig which shows they are imported.

The natives started domesticating the wild guinea pigs instead of hunting them for food. They realized that it was better to capture and domesticate them and rear them like other livestock such as cattle, pigs, and chickens.

Many families rear guinea pigs for food, and they also trade them.

They were also given as presents to newly-wedded couples.

Relationship Between Humans and Guinea Pigs

Guinea pigs are a popular import worldwide due to their wide range of uses. Guinea pigs not only serve as food for humans, but they also have religious and cultural significance in some cultures and can be kept as a pet.

Some of the relationships between humans and guinea pigs are stated below.

Guinea pigs play an important role when it comes to medicine. In Peru, guinea pigs are used for diagnosing illnesses. Many believe that they can be used to determine the cause of an illness, and they usually rub it against the ailing family member.

The guinea pigs will then be killed, and a medicine man in the area will inspect the intestines. The best guinea pig used in Peruvian medicine is black guinea pigs.

Guinea pigs also play an important role in modern medicines. Many researchers started experimenting on them to study nutrition, health products, diseases, and toxicology in the 1800s.

They are ideal test subjects for most researchers because they have biological similarities to humans. Guinea pigs helped in the discovery of adrenaline hormone Vitamin C and helped develop antibiotics, vaccines, and so on. 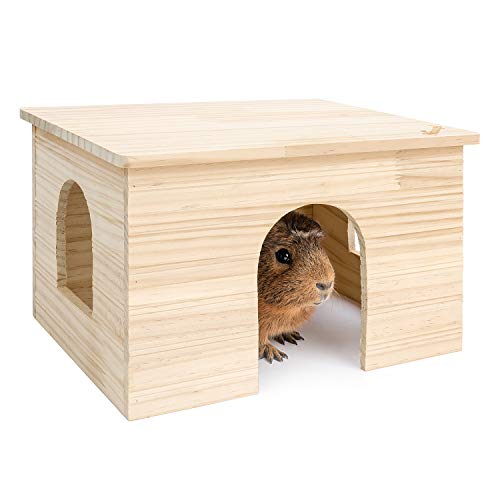 Guinea Pigs in Culture and Religion

Guinea pigs also have a religious and cultural significance to humans. Some ancient civilizations like the Moche (between 100 CE-800 CE) in northern Peru usually worshiped them, and they even incorporated guinea pigs in their artworks and built statues of them.

Incas, another ancient tribe in the Andes region, also sacrifice guinea pigs to their gods.

The main reason for breeding guinea pigs by the indigenous Andean people is to serve as a food source. Guinea pigs are generally raised for their meat, and they are known as a traditional staple in the Andes Mountains and South America, called cuy.

Nowadays, guinea pigs are kept as pets and companions by several people across the globe. This is because they are social, and they hardly bite or scratch people. Another thing is that they usually hesitate to escape from their cage.

All you need to make them happy is to provide them with their required diet and keep them in a cage where they can walk freely and with a partner.

Why are guinea pigs so bad?

Some people believe that guinea pigs are bad pets because they are very fragile and usually die all the time. They also have sensitive airways, and strong aromas can affect their lungs.

Another thing is that their teeth actively grow and can starve to death if you don’t file their teeth regularly.

Guinea pigs can also become stressed by loud noises and other animals.

Where are guinea pigs naturally found?

Guinea pigs originate from South America. They are usually found around the rocky regions, grassy flatlands, and edges of woodlands.

You will find them living in holes dug by other creatures or in burrows created by the thick vegetation in their habitat.

Yes, guinea pigs can fart. Farting is usually normal and natural, but the passing of too much gas can be quite dangerous for your cavies. This is because guinea pigs cannot pass large quantities of gas through their intestines like humans.

Once your guinea pigs pass too much gas, then it is a symptom of a deadly health condition called guinea pig bloat.

How long can a guinea pig live?

Guinea pigs can live for around 4-8 years under optimal care.

Check out: How Long Do Guinea Pigs Live? 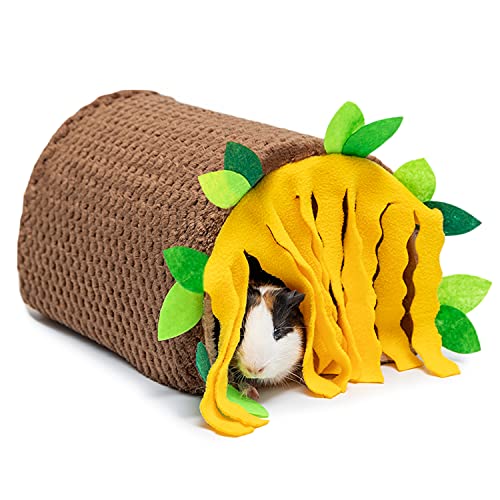 Now, it should not surprise you again that guinea pigs do not originate from Guinea in Western Africa, and they do not relate to pigs. However, guinea pigs have a rich heritage, so they are popularly kept as pets.

We hope this article helps shed more light on the ancestry of guinea pigs and how they are domesticated. If you have any questions or comments, you can write to us in the comment section below.