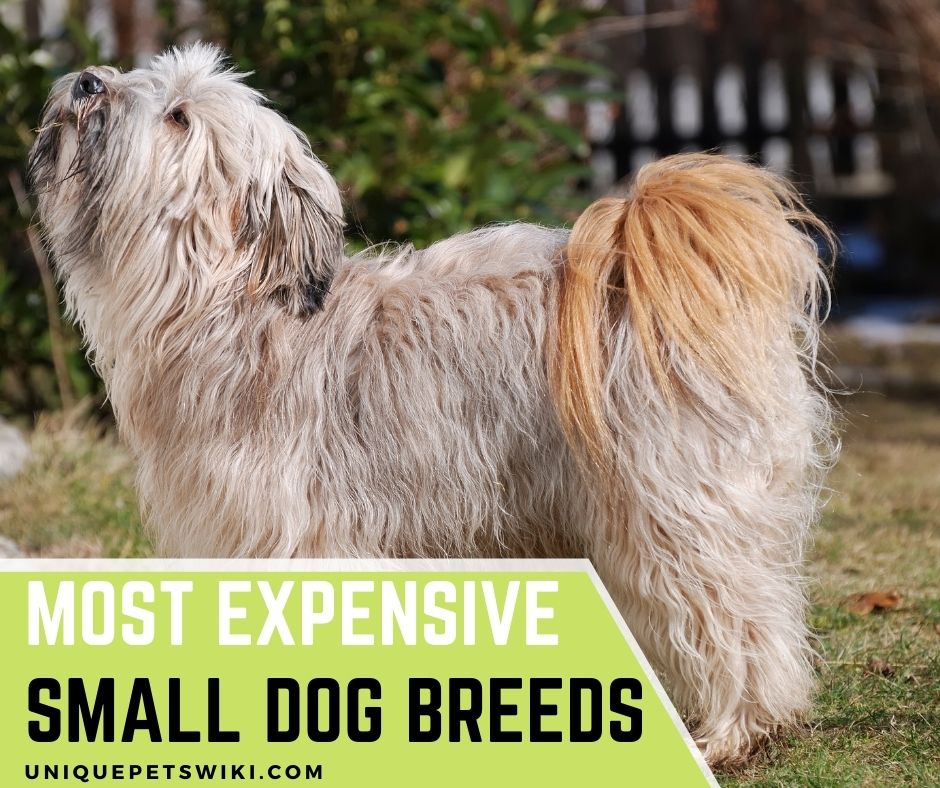 Most of the pet enthusiasts on the planet want some companionship. Whoever said that dog is man’s best friend was not wrong. However, you will have to pay to get a great companion for your home. As time goes by, small dog breeds become popular and as they do, their prices go up.

Just like fashion, there are variations in the prices of the best dog breeds. You can find a small dog breed for as little as $100 while some will cost more than $2000.

We have come up with a list of some of the most expensive small dog breeds to help you make an informed choice. In this article, you will find more details including the dogs’ histories and care requirements. Let us dig right in!

What are Expensive Small Dog Breeds?

Of late, people are getting worked up by the smallest dog breeds with the highest prices. With the avail of more time, more and more people are looking for a furry friend to hang around or play around with. But they all have specific prices that are dependent on several factors including the demand.

According to itsrosy.com, the most expensive dog was purchased for around $1.95 million in 2014 in China. The Tibetan Mastiff was thought to have some lion’s blood somewhere in its ancestry. To be honest, not many of us would be willing to pay that much even if we had it.

However, when you think of having the thing you want most, there is not much you would not do to have it, especially if you have that capability.

The smallest dog breeds range in height from as little as 7 inches to as much as 19 inches. However, the most expensive of those breeds include:

We will now look at some of the most expensive small dog breeds out there.

The Pomeranian is not only compact but also agile and active.

Originally, these dogs are from Pomerania and are descendants of Spitz breeds. Some of the close relatives of this breed include the Schipperke, The Norwegian Elkhound, the American Eskimo Dog, as well as the German Spitz.

These dogs are around 12 inches tall with a weight of around 7 pounds. However, some of the largest breeds would grow to around 14 pounds.

A Pomeranian has a very thick double coat. The undercoat is thick and fluffy while the topcoat is straight, long, and shiny. Some of the colors of a Pomeranian coat include black and tan, black, blue and tan, blue, chocolate and tan, and chocolate.

This is a very vivacious and smart dog breed. It is also inquisitive and quite alert. People also love that this dog breed loves making new friends.

Pomeranians are fond of people as well as other animals. However, you should know that the dog is known to pick a fight with larger dogs because he thinks he is larger than other dog breeds.

Therefore, it would be a good idea to avoid any confrontation with larger dogs.

Pomeranian dogs are active indoors. Therefore, they are great choices for those who live in apartments. You can also go for a Pomeranian if you do not have a fenced yard.

In regards to the cost, Pomeranians are among the most expensive dogs in the world. You should be prepared to pay around $800 to $2500.

The Tibetan terrier is a breed that loves being around people for companionship.

The breed is originally from Tibet. Tibet is known for its mountainous terrain. The dog was created to serve as a companion dog. It was believed that these dogs would bring luck, which is why the breed became widespread.

Adult Tibetan terriers will grow to around 16 inches and will weigh around 24 pounds.

The dog has a double coat. The undercoat is wooly and soft, while the topcoat has fine hair. You can get a Tibetan terrier with different colors including gold, white, brindle, black, silver, tricolor, and many more.

In regards to personality, the dog is pleasant, affectionate, and smart. It is also very gentle with a love to play around. Nevertheless, you will notice that this dog breed can be a bit cautious towards strangers.

This terrier is adaptable to different households. If you want the dog to thrive properly, it is recommended that you allow them to live indoors and not outside or in a kennel.

Living with people is important for the growth of the dog. Daily exercise is an important part of the dog’s health.

This spaniel is calm, intelligent, and affectionate.

The breed has not been around for a long time. It has existed for less than 1 century. This dog breed is a descendant of toy spaniels that appeared in most paintings from the 16th to 18th century. The dogs were appreciated highly by noble or royal families from England.

The Cavalier King Charles Spaniel will normally grow to around 13 inches with a total weight of around 18 pounds.

This dog has a beautiful coat that might be in any of four colors. These are ruby, black, and tan, tricolor, as well as Blenheim.

One thing you will love about this dog is that it loves meeting new people. It will be even much better if the new person would take time to offer a treat or a lap. Certain Cavaliers are sedate and quiet while others are rambunctious and rowdy.

Since they are generally quiet, they are perfect dogs for people living in condos or apartments. They are not very active. Therefore, a small space such as a small yard would be adequate for exercise. If you decide that you would prefer to walk your dog, it is recommended that you put him on a leash.

The dog is intelligent, playful, and independent.

This dog breed is originally from Germany where he was created as a badger dog. Even though we are not sure when this dog came into existence, there have been illustrations of similar dogs going back to the 15th century.

A miniature dachshund will grow to a maximum of 11 pounds and a height of around 9 inches.

You will notice that the dog has a very shiny, short coat. Mostly, the dog’s coat will be cream or red. Others will have black, chocolate, gray, and other markings.

This is a very lively, courageous, and clever dog. It is known that this dog can tend to be stubborn, which also means that he is created for perseverance. The dogs are known to be very fearless and also entertaining. But most of all, the dog simply wants to be around his owners cuddling with them.

The dog is known to have energy and stamina. What the dog appreciates most is walking or playing with other dogs regardless of their breed. This dog breed is also very active and will even be fine in smaller living spaces. All you will need to provide is adequate exercise.

This dog breed is known to be fiery and bold.

Originally, this dog is from Japan together with the Kai Dog, Shikoku, Akita, and many more. The breed was used for flushing out birds and small game for hunters.

A Shiba Inu adult stands at 16.5 inches tall with a weight of around 23 pounds.

The thick coat of a Shiba Inu is one of the reasons why people love it. There are different colors for a Shiba Inu including orange-red, sesame, as well as urajiro. However, there might be some white markings on the hind legs, tail, as well as forelegs.

This is one of the most alert, bold, and good-natured dog breeds. The dog is confident and strong-willed. Additionally, he is affectionate and loyal. However, you should know that the dog can be a bit suspicious when it comes to strangers.

You should get this dog if you have a fenced yard. That is mainly because he is playful and he likes taking walks. The fenced yard is adequate space for the dog to play around. If not socialized properly, this dog can be quarrelsome or timid, which is why you have to make sure to socialize him properly.

The Havanese will be affectionate to anyone including strangers.

The dog breed was introduced to Cuba by Spanish settlers after Cuba was claimed for Spain by Columbus. When they settled in Cuba, they had small dogs which later interbred and started developing to the Havanese breed we are fond of today.

The dog grows to around 11.5 inches and will weigh around 13 pounds.

The coat of this breed is soft, light, and silky. It does not shed easily and is in a range of colors including black, white, black and tan, gray, as well as sable.

A Havanese is an affectionate and gentle dog breed that loves human companionship. You will notice that your dog will follow you around even from room to room. This dog tends to become a bit anxious when left alone.

Although this dog is small, he has a lot of energy, which he might need to burn. A game of fetch or lengthy walk is adequate to keep him happy and help him get rid of all the excessive energy. You can live with this dog in any home including a large home or an apartment.

The adorable cockapoo has a personality similar to that of a big clown.

The dog has been around for a very long time. The dog breed has remained popular since the early 1960s. Even though the first interbreeding was accidental, the results were simply amazing. That is how this new adorable line began.

The miniature cockapoo grows to around 15 inches and will normally weigh up to 19 pounds.

You can expect a cockapoo to have any color that a poodle or a cocker spaniel has.

Cockapoo dogs are very easy to please and are intelligent. He is mainly preferred as a companion dog because he is happy and friendly.

The energy level of a cockapoo is moderate. However, they do not laze around all the time. A good walk is very fun for this dog and prevents the dog from being overweight.

Before you buy a Small Dog Breed

Let’s assume that you have already decided on a dog to buy. Where do you plan to buy it? You have to make sure that you purchase a dog from a breeder with a great reputation. Do not get a dog from a puppy farm.

If possible, it would be advisable to check out the parents of a dog. Meet them before you make a purchase. Checking all the vaccination certificates is also important.

After you have gone through all that, make sure to get one of the healthiest dog breeds.

There is a wide range of dogs on the planet and these are some of the most expensive for different reasons. But remember to check out every important detail of these dogs before you make a purchase. That includes meeting the dog’s parents. Have fun making a purchase.