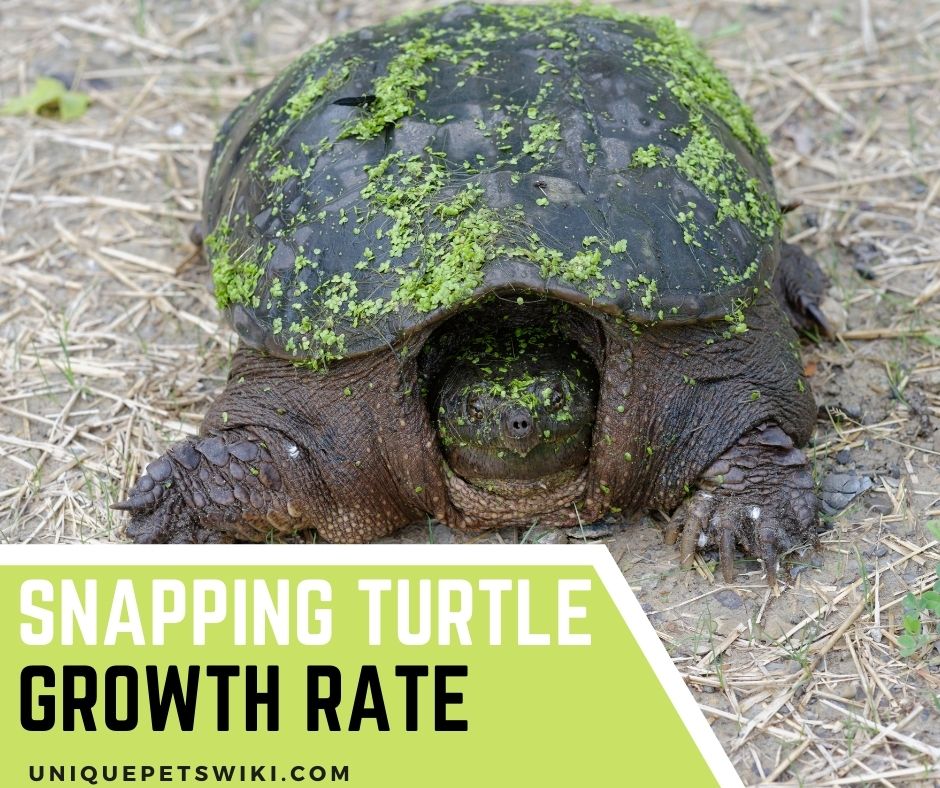 The growth of a pet is one of the glamorous things pet owners could ever ask for. But, have you ever been curious to know what snapping turtle growth rate is? Then read on to find out. There are actually factors affecting their rapid growth and these factors should be jotted.

You might be having problems or curiosities on what affects the snapping turtles growth rate. Awareness of the precautionary measures to take is very important so you would be able to apply the practices when growth-related issues are encountered.

It is such a good read to know what affects the growth rate of snapping turtles since they also play an important role in the ecosystem. Keep reading and you’ll get more amazed with its facts.

Snapping turtles are big eaters. They are more likely growing fast especially in captivity reaching 5 to 6 inches in length. Their shell continues to grow about 12 to 14 inches for the next 15 to 20 years.

In general, snapping turtles grow rapidly by about 3 inches during their first years. They will only grow about 1 inch per year until they reach adult size. Take note of more useful information about their growth rate through reading this article,  Snapping Turtle Full Grown: How Long? Weight, Determine The Age.

Young snapping turtles grow fastest and growth rate declines during maturity. So, their growth rate is rapid when they’re still young and gets slower when they reach maturity.

Snapping turtles grow bigger in captivity. They will have unlimited access to care, shelter, food, and even veterinary healthcare treatment. They are voracious eaters, their average growth rate of 12 to 15 cm can be greatly exceeded if a pet owner constantly provides them with an unhealthy diet.

The size of snapping turtles is not solely based on its age, but also with genetics. Two snapping turtles held captive and housed in the same tank still vary in weight and shell length after a year or over years. The largest having 5.5 inches shell length is outgrown by the smallest species by 6.5 inches.

If your state legalizes the captivity of snapping turtles, then it’s fine to collect them. However, it’s still recommendable to obtain from captive bred specimens to ensure better life and environment for them. Read more about the Importance of Captive Breeding.

Snapping turtles in captivity have a longer lifespan. They are less threatened, well-fed, and housed comfortably. In terms of maintenance in growth, they are provided with an ample amount of UVB Light.

When snapping turtles are held captive for too long, they tend to become aggressive when released to natural habitat or to stroll them outside. Their growth is also at stake if feeding is not properly monitored. Further, they require an enclosure with the exact replica of their natural habitat.

Snapping turtles in the wild only live differently in terms of environment since they’re not kept as pets. They act as good predators by extending their jaws and neck by about 12 inches, capturing prey with some struggles. Their size ranges from 8 to 14 inches but could grow lesser due to lack of food.

On average, snapping turtles in the wild can live between 11 and 45 years, 50 years if lucky. They have a lesser lifespan than those living in captivity that reaches until 70 years old. Male snapping turtle’s size reaches up to 26 inches in shell length and weighs about 175 pounds, while females weigh about 50 pounds.

There are several factors that affect the growth rate of snapping turtles. Factors like birth effects, temperature, sex, and natural habitat are always included. But, let’s tackle these three: Diet influences, environmental conditions, and age and genetics.

Snapping turtles are omnivores, so they should eat or be fed with animals and plants. One-third of their diet must include plants to support their big sizes.

Owners should be aware that an unbalanced diet, particularly on too much protein intake, will cause snapping turtles to suffer from pyramidal disease. This disease will seriously affect the shape of the turtle shell.

Their growth rate is rapid if a balanced diet is implemented, that would mean a stronger shell for them. However, feeding of snapping turtles also matters with age. That is, feeding twice daily for less than 6 months and once only for those over 6 months.

Feeding them in water or a wet enclosure helps them to swallow evenly. They grow largely in captivity than in the wild since commercial pellets are available anytime. The more adequately healthy food they eat, the higher their growth rate.

Generally, snapping turtles can grow up to 4 inches in their first year and 1 to 2 inches over years.Adaptation to environmental conditions also affects their growth rate.

Cooler environment or temperature elicits slower growth for snapping turtles. The enclosure, if captive, or the place they are situated at influences their growth. They rarely bask on land surfaces but float to warm themselves.

Reptisun UVB 5.0 fluorescent bulb or Repti-gio UVB bulb in a snapping turtle’s enclosure is not necessarily suggested. Most of their nutrients or vitamins come from their diet. In addition, they like to soak instead of sunbathe.

However, to prevent Vitamin D3 insufficiency, an enclosure similar to their natural habitat is needed. A UVB source is essential and UVB light rich in Vitamin D3 is good for calcium intake.

Inadequate UVB light causes the shells of the snapping turtles to become brittle. They might experience metabolic bone disease if not generously given with Vitamin D3. If snapping turtles are deprived of UVB light for too long, their growth rate might decrease or they die.

The bigger enclosure or space, the better. Snapping turtles love to swim and a big space is ideal for their fast growth rate. The water in the tank must be fresh or brackish.

Putting enclosure accessories such as sturdy rock structures and hide area for snapping turtles provides a more enriched and healthy environment. They grow better if taken healthily. Reptisun UVB 5.0 fluorescent bulb or a Repti-glo UVB bulb over your turtle’s enclosure.

To prevent an abnormal growth rate of snapping turtles, create an enclosure with a 55-120 gallon tank or a 2 foot deep by 4 foot long swimming space.

Snapping turtles prefer to live on both land and water surfaces. They would want the quality of water to be muddy. Edible plants should be readily available to add to their growth. Humidity and temperature should take between 75°F-80°F water temperature and 80°F-86°F direct air temperature. During basking, 90°F is fine.

Make sure to add hiding spots for them to feel safe and secure. Embryonic temperature greatly influences an increase of growth rate in snapping turtles. Water temperature should be kept between 68 and 76 degrees Fahrenheit, and depth level of the same height as the snappers’ width.

Hence, make sure that snapping turtles’ tanks or enclosure should be consistently cleaned, water quality and temperature must not exceed 23 – 25 degrees Celsius, and basking spots are thoughtfully made to help a balanced growth rate among all snappers.

The Age And Genetics

After reaching an average size of 3 to 4 inches in the first few years, the growth rate of snapping turtles gradually slows down by about one inch in years later. Then. This seems to be the case in most animals, including humans. Human growth slows down after adulthood or declines as we age.

Besides that, male snapping turtles are larger in size weighing between 175 pounds to 220 pounds, while female ones weigh about 50 pound. The incubation of eggs primarily affects its growth rate. Family identity is also a factor as well as hatchlings. Larger hatchlings grow faster than those coming from smaller hatchlings.

Even if snapping turtles are living in the same environment, eating the same amount of food, and getting big with the same sex, their growth rate still differs. Growth rates of snapping turtles take effect innately. Regardless of the similarities they experience from both captivity and in the wild, they still struggle on one thing, survival.

How quickly does a snapping turtle grow?

Growth of snapping turtles depends on sex, age, diet, and environmental conditions. Female snapping turtles need to reach even a decade to fully mature. Some take about 20 years to have their first hatch. Ideally, 1 cm a year is observable to them.

What is the largest alligator snapping turtle ever caught?

How far can snapping turtles reach?

Keeping an extraordinary kind of a turtle like snappers needs not only your care and attention but also knowledge on the factors affecting their growth rate. Growth rate in captivity is much more favorable than snapping turtles in the wild. Environmental conditions, age and genetics, and diet should be considered top priorities if ever you decide to keep one.

Nothing’s more important than an individual who is responsible for his own learning and actions, especially about the proper precautions to be taken of the factors affecting the growth rate of snapping turtles.

Hope the information in this article will help you take good care of your pet.