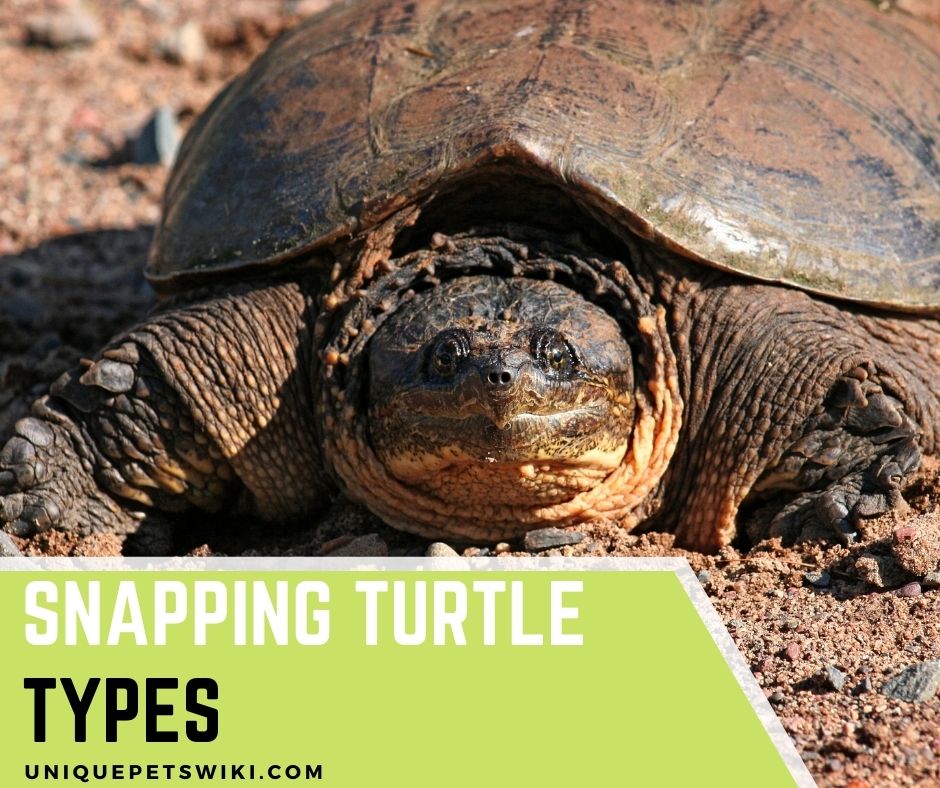 However, these two families of turtles (the snapping turtle and Asiatic big-headed turtle) are different from each other, but this stance might change in the future if scientific studies prove them to be related.

Having a close resemblance to one another and other species of turtles, it’s important that you know how many snapping turtle types are there, what they look like, what they have in common, and what sets them apart.

As you’ll find out in this article, the two types of snapping turtles have many things in common as well as many distinct differences.

Hence, your knowledge of these similarities and differences will help you to make an informed choice when choosing between the morphs as pets.

How Many Types Of Snapping Turtles Are There?

These two types of turtles are thus classified as one family because of their characteristic “long and pointed beaked mouth, spiky shell appearance and their nature of snapping at food and predators.”

But are these just the only things about these two types of snapping turtles? Keep reading as the next section will be focused on expounding their similarities and differences.

For the past 200 years or less, snapping turtles have become one of the most popular animals kept in homes as pets. Especially in the United States.

The common and alligator snapping turtles have a lot in common. First, they are from the same “Chelydridae” family, although they are classified into different genus.

Secondly, is the absence of teeth in their mouth. Instead, they have long and pointed beaks on the upper and lower parts of their mouth with scissor-like jaws that they use to eat (snap at) food.

Another unique similarity between the two types of snapping turtles is that they have extremely small plastron which makes it impossible for them to completely tuck their bodies into their shell. This could also explain why they act aggressively when taken out of the water.

As stated earlier, both the common and alligator snapping turtles have a small carapace (top of the shell) and plastron that cannot protect their bodies as with land turtles or tortoises.

For this reason, a greater part of their body is exposed to attack by predators. Hence, to keep themselves safe from predators they tend to act aggressively. This happens especially if they are taken out of their water habitat.

Furthermore, both types of snapping turtles have no teeth with which they eat or bite. Instead, they have scissor-like jaws with a beaked mouth that they use in eating and snapping at predators or any other elements of threat.

Both the common and alligator snapping turtles have spiked osteoderms on their tails. However, the positioning and arrangement of these osteoderms differ between the two species.

One other significant feature that both the common and alligator snapping turtles have in common is a short and blunt nose also called snout. But again, this isn’t the same between the two snapping turtle types.

The two snapping turtle types are majorly aquatic in nature and are native to the United States. They are commonly found in slow-moving freshwater bodies such as streams, ponds, lakes, and even rivers with muddy or sandy bottoms.

While in the water, they usually prefer the muddy bottom of the water. This way, they can remain submerged in the water for up to 3 hours or more without coming out to the surface to breathe.

The two snapping turtle types are omnivores. This means that they diet both on vegetable plants and animals.

In the wild, they have a wide variety of foods to feed on such as small fishes, shrimps, crayfish, algae, water lettuce, bog moss, common duckweed, worms, frogs, birds, aquatic plants, and many others.

As they are aquatic animals, it has been observed that snapping turtles cannot swallow food while on land. This is to imply that, in captivity, the best way to feed them is in their tank rather than outside their tank.

Furthermore, both the common and alligator snappers have the same eating habit. “They both snap at their food, hence, the reason they are called ‘snapping turtles’.”

For pet animals that depend entirely on their environment to regulate their body temperature, artificial heating and lighting sources are needed to keep them warm and healthy. This also applies to snapping turtles.

Although snapping turtles do not sunbathe and can tolerate extremely cold weather conditions, they also do get a good amount of UVA and UVB from the sun when they swim to the surface of the water in the wild.

This way, they can get the right amount of vitamin D3 needed for calcium absorption from their diets.

That said, in captivity, they should be provided with both a heat lamp and UVB lights. And the temperature of the aquarium should be kept within 750 F to 780 F or 820 F for adults.

Frankly speaking, both common and alligator snapping turtles have a calm disposition and are docile. However, when they are taken out of the water, they tend to act aggressively in self-defense.

The major difference between common and alligator snapping turtles is in their appearance. Although these two snapping turtle types have similar physical features, they differ either in length or in the positioning of these features.

Besides physical appearance, these animals have different hunting habits in the wild. This section is going to focus on the differences between the two snapping turtle types.

By now you already know that both common and alligator snapping turtles have small carapace and plastron.

Moreover, the carapace of common snapping turtles is generally more round in shape and smooth while that of alligator snapping turtles are angular and with three-pointed ridges along the shell that run from the head to the tail.

Alligator snappers have long and slender-looking tails of about the same length as their carapace. In alligator snappers, the bigger they grow, the longer their tails also grow, and the smaller the osteoderms become.

However, in common snappers, the bigger they get, the fatter their tails are and the more pronounced (big and pointed) the osteoderms become. The nose (snout) of the common snapping turtles is short and blunt whereas the alligators have a longer nose.

Although both species are native to the United States, the common snappers dominate the eastern part of the US, some parts of Mexico, and Central America.

On the other hand, the alligators are considered threatened species because their range has been reduced to only the Southeastern United States, from north to southeastern Kansas, western Illinois, Florida Panhandle west to East Texas, Missouri, southeastern Iowa, southern Indiana, western Tennessee, and Kentucky.

The alligators are more sedentary in nature. They often spend their time in the water. However, the common snappers, though they spend a great amount of time in the water, also move across land.

The alligator snapping turtles ambush their prey. In the wild, they hunt by laying on the bottom of slow-moving creeks and rivers with their mouth wide open displaying a worm-like appendage at the base of their mouth to lure prey.

The common snapping turtle also ambushes its prey. But they are more nomadic than alligators. Common snappers usually would move about the body of the water looking for prey.

Once they see one, they would strategically hunt it down with their sharp beak before the prey notices.

Both common and alligator snappers are long-lived. On average, they live up to 30 years in the wild. In captivity, they are likely to live longer since there is no predator to threaten their existence. They are estimated to live for about 50 years in captivity.

These animals don’t cost much compared to other species of exotic pets. The average price of a young or baby alligator snapper is between 40 USD – 75 USD. Adults will cost more than 75 USD.

The common snapping turtles on the flip side cost between 30 USD – 70 USD for baby and young specimens. The adults cost between 60 USD – 169 USD.

The alligators are sedentary, nocturnal, and ambushers. The common snappers move about and are not nocturnal. Both species are calm but will act aggressively if threatened.

The only difference in their level of aggressiveness is that the alligators have a strong bite force capable of amputating one’s finger.

Although the two species (types) are good pets for beginners, the species popularly kept as a pet is the common snapping turtle.

The snapping turtles are one of the best pets any category of herpetologist can keep as pets. They are docile, calm, and very easy to care for in captivity. Aside from the fact that they consume lots of food, they don’t require handling.

Hence, they make great choices for people with busy schedules. These animals aren’t generally aggressive as many have made them look. They are just trying to defend themselves, which in any case is normal.

Imagine as a human being sent to live a day in a forest without a secured tent, you’re likely to act over-aggressive. The same applies to snapping turtles. We see them acting aggressively when they are brought out of the water for a longer time.