Ball pythons are popular for their docile nature and friendliness. And while hissing is never a social thing for snakes, you probably didn’t expect your ball python to hiss.

However, it is worth noting most snakes are capable of hissing, including ball pythons. But, why do ball pythons hiss when they are supposed to be calm and friendly?

Well, ball pythons can hiss due to several reasons. This article will give you these reasons and even guide you on how to handle a defensive python.

As they say, “Wisdom is power!” keep reading to have power over a hissing ball python pet.

Why Do Ball Pythons Hiss?

Large and venomous snakes may feel well equipped to defend themselves against possible predators. However, ball pythons are neither large enough nor venomous to attack their predators. Thus, they mostly use hissing sound to intimidate their possible attackers. Therefore, hissing in ball pythons is a defensive mechanism to scare away predators.

The other reason why ball pythons hiss is to mark their territories. For instance, if you house more then one ball python together, you could experience frequent hisses from them as they try to dominate over each other.

Again, when ball pythons perceive you or other animals as a threat, it can remain hidden and loudly hiss. The loud hiss is mostly to fool the possible predator into thinking that the sound is from a large snake and thus get scared.

The third reason why your ball python could be hissing is due to stress and if it’s uncomfortable.

But, if the hissing continues, it can indicate that your ball python is stressed or uncomfortable. You should, therefore, look for the underlying reasons for continuous hissing.

What Other Pythons Will Hiss at You for the First Time

Snakes hiss at you if they perceive you as a threat. Therefore, it is normal for any snake, including pythons, to hiss at you during the first days after introducing them to a new habitat.

There are three commonly domesticated python snakes. Unfortunately, they are all likely to hiss at you for the first time.

Ball pythons are docile and sociable snakes. However, they too can get defensive and thus hiss at you especially, at first.

However, with time, they get used to their habitat, they stop hissing unless they get stressed or uncomfortable.

When ball pythons feel threatened, they puff up and then expel the excessive air with force producing the hissing sound.

If you see your ball hissing at you, it’s a warning sign to tell you it’s capable of attacking. Thus, you should keep off and avoid handling it at that point.

Burmese is another commonly domesticated python. It is large and can grow for up to 18 feet long.

Thus, even though they can make excellent pets, they are not suitable for beginners.

Burmese pythons also hiss, especially at first, when stressed and don’t want to be handled. If your Burmese is hissing and in a position to strike, you should avoid handling it.

Remember that unlike ball pythons whose bites are not powerful, Burmese can give a powerful, painful bite.

The reticulated python belongs to one of the largest snakes in the world. They can grow from 14-18 feet long.

In fact, they grow for more than 5 feet long within the first years. Therefore, they are only suitable for experienced snake owners and not for beginners.

They can also be unpredictable, and thus, it is inadvisable to handle an adult by yourself as they can kill humans through constricting.

Therefore, even though your reticulated python is not hissing, it can still attack without any sign.

Ball pythons are the most docile snakes, especially if they are bred in captivity. However, if hungry, stressed, about to shed, or ill, they can get defensive and try to bite.

How can you Tell If Your Ball Python Is Defensive?

You can tell if your ball python is defensive by observing its body language. Defensive ball pythons tend to exhibit common behaviors, such as:

If you see your ball python exhibiting one or all of these behaviors, it would be advisable to leave it alone.

You should also look for the underlying reasons for your ball python getting defensive, mostly if it’s already used to its habitat and you.

For instance, a hungry ball python may lie motionless, while posing their head in a ready to attack position.

They can also slowly prowl in their habitat in search of prey. These habits should let you know it’s time to feed your pet and not handle it.

On the other hand, a calm ball python only purposefully moves about slowly in their cage. They can also flick out their tongue to learn about their surroundings.

It could be the perfect time to handle your ball python. But remember not to handle it more than once in a day.

While overhandling can make your ball pythons get stressed, not handling them makes them not get used to human interactions. Thus, it would help if you handled them at least three times a week and not more than once in a day.

As a responsible ball python hobbyist, you should clearly understand your ball python’s behavior. That way, you will know when to handle and when to let them be.

Even when ball pythons are social and docile, some can be naturally aggressive and defensive.

You should, therefore, understand how to handle a defensive ball python.

How to Handle a Defensive Ball Python

First, ball pythons are non-venomous, and their bite is not painful but only feels like a few pricks.

Therefore, never not be afraid of your ball python even though it’s exhibiting defensive behaviors.

Secondly, you should understand that some ball pythons are just irritable and defensive even when they are not shedding or stressed.

Therefore, if you notice that your ball python is never docile and letting you handle it, you should handle it even when it’s not ready for it.

Handling it more often will help you tame it and get used to it. So, how do you handle a defensive ball python?

Be calm and courageous.

Even though your ball python is hissing at you, it would be good to gather courage and handle it firmly but without hurting it.

Ball pythons tend to calm down if they are already in your hands. But, if it still goes ahead and tries to bite you, don’t ever drop it instantly.

That will help it understand that biting you does not lead to letting it go.

If you are overly scared of a ball python’s bite, you can wear welding gloves to avoid direct skin contact with it.

Gloves can prevent your ball python from accessing your skin in case of a bite.

Be Quick When Picking It and Support Its Body Firmly

Ball pythons get more tense if you pick them in slow motion, especially if you are not confident.

Therefore, you should pick it up at once and ensure that you fully support most of its body. The ball python will start to calm down as soon as it’s in your hands.

You can also consider covering its head with your hand as the ball python is mostly likely to curl into a ball hiding its head if you do that. You can then pick it up when it’s still curled.

Fully understanding your ball python will help you better take care of them. As a suggestion, we would recommend you to get a good ball python book. Not to become an expert on ball python care but will help you avoid the common mistake in new pet snake owners. 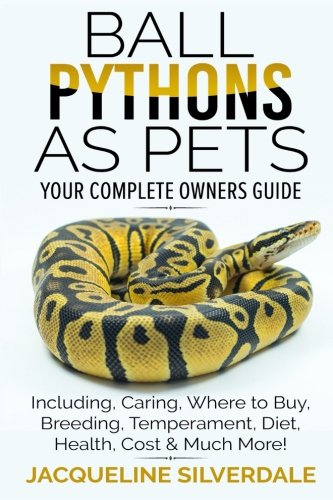 Those are the best tips to help you handle a defensive ball python.

How Long Does It Take to Tame A Ball Python?

How much time you may need to tame a ball python may vary from one snake to the other. However, most ball python hobbyists agree they mostly take 5-7 days to get tamed.

Taming a ball python also depends on the previous living conditions of the ball python.

Ball pythons may be famous for their docile and sociable nature. However, it doesn’t mean that they all have similar behaviors.

Ball pythons have different personalities, just like humans. Thus, some can be defensive and irritable.

Therefore, it is your responsibility to learn your ball python’s personality by keenly observing its behavior.

If it seems irritable and defensive, be patient, and ensure that you provide a suitable habitat to reduce stress and keep it comfortable.

But, if your ball python continues to be defensive, make sure you handle it regularly for short periods for at least three days in a week.

Remember that ball python’s bite is not poisonous and can never cause you much harm. Thus, it would be best if you handled your ball python with confidence and without fear.

All the best with your ball python