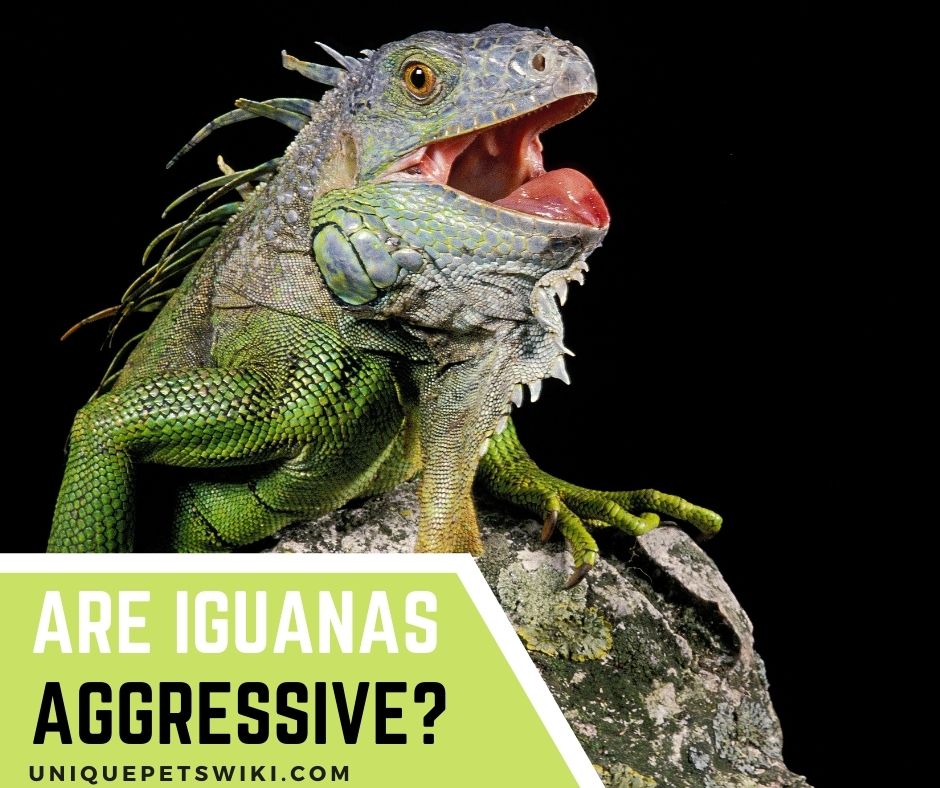 Iguanas are among the most popular lizards that can be kept as a pet. They usually grow to a large size, and it is quite hard for beginner hobbyists to care for them. However, one of the things that most people wonder about before buying iguana is whether they are aggressive to humans.

Generally, iguanas are not dangerous animals if you can treat them with caution, knowledge, and respect. This is because of their excellent defensive skills, and they can try to attack when threatened. Iguanas can defend themselves by biting, scratching, and whipping their tails.

Are Iguanas Aggressive To Humans?

No, iguanas don’t usually get aggressive to humans. However, iguanas can bite humans when they are defending themselves. They have sharp teeth used for tearing plants, and it can be painful to humans.

The good thing is that they give a warning before they attack humans. Apart from being aggressive to humans, iguanas can dig lengthy tunnels that can damage seawalls, landscape foliage, and sidewalks.

Generally, iguanas are not aggressive but can display aggressive behavior as a defense mechanism or during mating season. Iguanas can also become aggressive to show dominance, especially when kept with another iguana or when looking for the best mate for reproduction.

Iguanas are quite a formidable opponent when aggressive. This is because of their numerous body parts like strong teeth, sharp claws, and heavy spiked tails. All of these can be quite dangerous whenever they are aggressive.

It is best to take an aggressive iguana seriously as they have a painful bite.

Iguanas show several signs when they are about to bite. You can keep an eye out for these signs to avoid getting bitten. Once you notice any of these signs, you should leave your iguana alone.

Iguanas can show at least one of the signs above when they feel under threat and can become aggressive. However, there are some unusual situations where iguanas can bite without any warning. This is usually in a rare situation.

What Happens If Iguanas Bites You

The good thing is that iguana bite is not poisonous as they have atrophied venom glands that produce weak and harmless venom. The bite can cause inflammatory reactions on the site that are due to the anti-inflammatory response of the immune system. The inflammation will decrease with time gradually. However, their bite can cause severe damage to ankles, fingers, face, and wrists.

All you can do when an iguana bite you is to first clean the bite with warm water and soap. You can then contact a medical professional for advice. The doctor can then help recommend other treatments or antibiotics to use based on how severe the bite is.

It is best to contact your doctor because most iguanas carry salmonella bacteria that can lead to severe illness in a human.

Reasons Why An Iguana May Be Aggressive

Iguanas can become aggressive and bite or try to bite you for several reasons. Some of these reasons are stated below.

One of the common causes of aggression in iguanas is fear. Generally, iguanas usually prefer to run than to fight when they feel threatened in the wild. But this is not the case when in captivity as there is no option to run; they will have to be aggressive.

Male iguanas are usually more aggressive if you keep them with other pets. Iguanas are very territorial and will try to dominate the other pets.

Signs That Shows That An Iguana Is Scared

What Owners Can Do To Make Iguanas Feel Comfortable

The first step to ensure your iguana is acclimatized to a new environment is by giving it some weeks to settle in before you even try to tame it. You can then set up a routine for feeding, cleaning, and handling your iguana to make it feel safe and secure.

Another thing is to talk to your iguana daily to help it identify your voice and get used to it when you are around. When planning to keep two iguanas, you need to avoid housing the iguanas in a small enclosure to avoid aggression towards each other.

Although female iguanas are not as aggressive as their male counterparts, they can also display aggression during the breeding season. The breeding season for iguanas usually starts from October to February.

Signs Of A Breeding Female Iguana

Here are some signs that you can use to determine that your female iguana is about to breed or breeding.

Male iguanas are not usually very aggressive during the breeding season like females. During this period, the female will be restless and aggressive. Once ovulating, it will start to find a spot where it can lay its eggs whether the egg is fertilized or not.

Once they see a suitable spot, they will start to dig the spot to then lay its egg there. Female iguanas may also refuse to eat, and their potty habits will change.

How To Control And Deal With Female Iguana Aggression

You can deal with aggression in the female by providing a nesting site for your iguana where they can lay the eggs. Another way to reduce aggression is by giving it a warm bath.

Even a cool-headed iguana can become aggressive during the breeding season. They can be aggressive for about 3-5 weeks during this period.

Signs Of A Breeding Male Iguana

Here are signs that a mature male iguana can give when breeding.

Furthermore, you should keep male iguanas away from each other if you keep them in the same enclosure to avoid fighting.

How To Control And Deal With Male Iguana Aggression

A great way to help male iguanas during the breeding season is by giving them space to roam around. Male iguanas can also become aggressive because of sperm accumulation in their vent. You can help your iguana by removing the excess sperm by massaging the vent area.

Another thing you can do is provide a hump toy to help your iguana secret the sperm in their vent. You can also assert dominance by standing your ground and speaking loudly to your iguana to leave whenever it tries to follow or attack you.

Giving a male iguana a warm bath can also help them to relax.

There are times when iguana can be aggressive because they are stressed, angry, or nervous. When this happens, your iguana can bite or lash out with its tail. This is common for new iguanas and should stop this once you have fully tamed your iguana.

Things That Make Your Iguana Angry, Stressed Or Nervous

What Owners Should Do To Reduce Stress On Iguanas?

Here are some ways that you can help your iguanas to reduce stress.

Iguanas are territorial creatures and can attack humans when threatened. They are large-sized lizards with sharp teeth, and they can inflict serious bites on humans.

However, they are a friendly and relaxed pet, and the likelihood of injuring you is quite low if you have the right knowledge and handling procedures.

We hope this article helps provide enough information about iguana behaviors and why iguanas can become aggressive to humans. If you have any questions or comments, you can leave that in the section below.