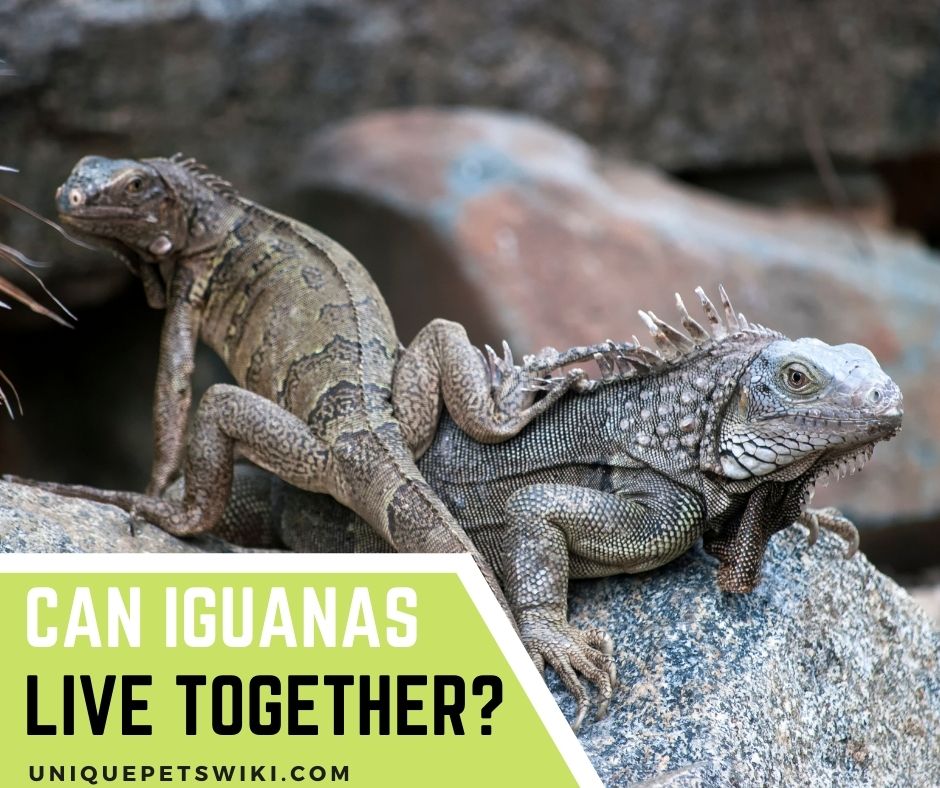 As an iguana owner, you may be concerned whether your pet would be lonely if you kept it on its own. You may then be wondering if it is possible for iguanas to live together to help keep them company.

Iguanas are solitary creatures and can do well on their own. However, iguanas can live together, but it is not recommended. Keeping them together will depend on several factors like sex, size, individual personalities, and so on.

In this article, we will help highlight everything you need to know about keeping iguanas together, from whether it is a good idea to keep them together to the pros and cons of doing it.

Can Iguanas Live Together?

However, you can keep two iguanas together if you can provide a separate room or a large enclosure where it is not possible for them to see each other.

Understanding About Iguanas Dominance Behavior In The Wild

Green iguanas are diurnal creatures, and they spend most of their day on the tree. They love basking a lot, and they do this very often. You can provide loads of climbing opportunities in their enclosure to keep them happy and healthy.

The most dominant iguana also takes ownership of numerous trees in its habitat. The female also flocks around the dominant male, and a dominant male can have several females in his three. Females also display dominant behavior and will fight each other.

The most dominant female is the one that will be in the highest spot where the dominant male stays.

Can You Keep Iguanas With Other Reptiles?

No, just like it is not recommended to keep two iguanas together, you should avoid doing the same with other reptiles. Iguanas are very territorial and display their dominant behavior, whether with other iguanas or reptiles.

Iguanas should not be housed with reptiles like chameleons, bearded dragons, anoles, monitors, or snakes. It is best to keep them in a separate cage where they won’t even get to see each other. Apart from the dominance problem, the living conditions of iguanas are usually different from other reptiles, which can also cause problems.

The habitat, diet, and enclosure environment of the iguana may differ from the other reptiles. Growth stages and feeding requirements during different stages of life need a focused diet. So, it is not recommended to keep iguanas with other reptiles.

2 Risks When Iguanas Live Together

Iguanas Get Territorial And Can Attack Each Other

Iguanas are territorial creatures and can attack each other to show dominance. However, there are exceptions where larger and smaller iguanas can be friendly to each other. But most times, same-sized iguanas may bully each other; a tiny iguana can also be hostile to the others.

The reason why iguanas can become aggressive when kept in pairs is that they will fight for the best spot in the cage, especially the higher basking spot. Another thing is that iguanas usually want the food to themselves and will become aggressive to each other to gain more territory.

Iguanas will also become more aggressive towards each other when it reaches the sexual maturity stage. When Iguanas get aggressive and attack each other, this can lead to serious injuries, and it is best to avoid that.

Iguanas Will Cause Each Other Stress

Iguanas can easily be stressed when kept together. This is because they are territorial, and even if you provide a full space for them, they will fight for territory, which can be stressful. Furthermore, your iguana will be stressed if one is silent and is not fighting the dominating one.

Stress can then lead to the weakening of your iguana immune system. This will then lead to infections and diseases to the less dominant iguana and can even lead to death.

Signs To Help Determine Whether An Iguana Pairing Is Working

If the iguanas are fighting to show their dominance, separate them. Notice the behavior of the iguana during feeding. If one iguana is stressed and not eating, it means, it is less dominant. So, if the pairing is not working, you need to keep them in a separate enclosure

Are There Any Pros To Keeping Iguanas Together?

Here are some of the advantages of keeping iguanas together:

Baby iguanas can live together without any issue until they become around 1-1.5 years old. Iguanas usually reach sexual maturity during this period and become aggressive towards each other. This is to show dominance and get a suitable mate.

Housing The Iguanas In A Separate Cage

Housing two iguanas in the same cage can lead to a fight for dominance and stress to your iguanas. Keeping the iguanas in a separate cage is a great way to house them. This will help ensure your iguana will not attack each other and live in peace without getting stressed.

Another great alternative to house iguanas together if you don’t want to use a separate cage is by using a very large enclosure. The enclosure should be huge that both the iguanas will have their own space with their own feeding station, heating source, water dishes, and other accessories.

This will help ensure they don’t fight for anything and can simply live in their own space.

This is because female iguanas don’t usually fight for food or territory. However, they can also attack each other. You can prevent this by providing enough space for them to help maintain the peace.

It is not recommended to just add a new iguana straight to the enclosure without introducing the iguana to each other. This is because the old iguana can feel threatened and attack the new one.

The best thing is to introduce the new iguana to the current iguana in neutral territory. During the introduction, you can then pet and talk to them and leave them for about 30 minutes to determine if they are okay with each other.

Once they are okay, you can then introduce the new iguana into the enclosure to help familiarize itself with the surroundings. After about an hour, the established iguana can then be added back to the tank. You will then need to watch them closely for a few hours to see how they react to each other.

It is important that you watch your iguanas closely over the next few weeks to ensure they are enjoying the space and eating well. Once you notice that one of the iguanas is experiencing weight loss, looks lethargic, is stressed, or is sick, then you may have to separate them or get a bigger enclosure.

Iguanas have different personalities from one species to another. However, it is possible that you house two iguanas together if you can meet some of the criteria stated above. If you notice that your iguana does not like living with a new iguana, then housing two iguanas together can be quite risky for your pets.

If the iguana didn’t like it and this decision can be risky for your pet, then I don’t think there’s any reason to keep two iguanas together.

Do iguanas eat each other?

Can iguanas be housed with other lizards?

Where do iguanas sleep?

It is not recommended to keep iguanas together in the same cage. Iguanas are quite territorial, and they will fight each other for space and food. Furthermore, one iguana will dominate the other one, stressing the iguana out.

The stress can also kill the iguana as its immune system will be weak.