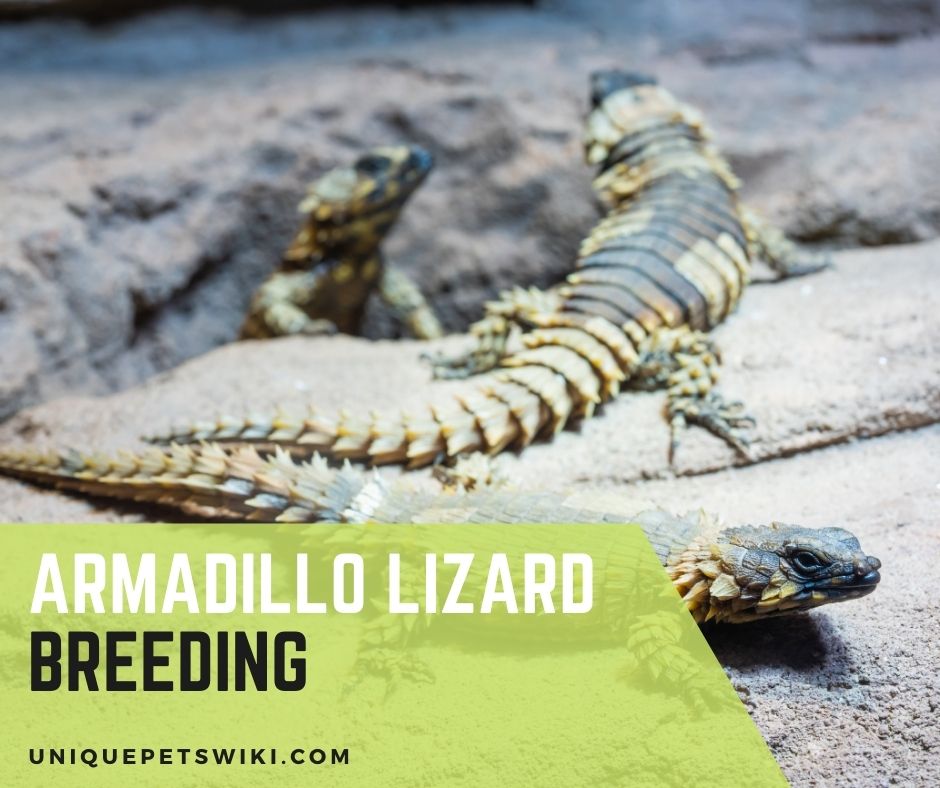 Armadillo lizards are unique-looking reptiles and many regard them as the closest thing that you can get to real dragons. They also have a fascinating personality that will surely captivate reptile lovers. The best thing is that it is quite easy to care for them which makes them a perfect pet for beginner hobbyists.

Armadillo lizards are usually hard to get and you may be wondering if you can breed them on your own. Unlike most reptile species out there, armadillo lizards usually give birth to their young ones alive. However, in captivity, it will only reproduce if you keep it properly and this can be a thrilling experience.

In this article, we are going to explain everything that you need to know about armadillo lizard breeding from mating to how you can care for the hatchlings.

Armadillo lizards not only have unique social lives, but their reproductive habits are also fascinating. Armadillo lizards are among the few ovoviviparous lizard species. This means the egg will develop inside their body and the baby will then be born alive.

Furthermore, the baby is usually half the size of its parents and it is identical to them. The males are usually territorial but will mate with other females that stay in their territory. However, the female armadillo lizard can visit the territories of several males in a breeding season for breeding.

The fascinating thing is that most females usually put a gap between reproductive years. This is why their reproduction rate is slow and their population is declining in the wild.

All armadillo lizard hatchlings look the same but once they reach sexual maturity there is a little sexual dimorphism. Some of the following characteristics can be used to differentiate the male from the female.

Can A Male And Female Armadillo Lizard Live Together?

In the wild, armadillo lizards are more of a social creature. This means they prefer if you keep them with other armadillo lizards. Furthermore, this makes it easy if you want to keep two or more lizards in the same enclosure.

A male and female armadillo lizard can live together in peace. However, the males are territorial to each other and will get more protective of their environment during the breeding season. This is to keep other male competitors away from its female partner.

How Old Do Armadillo Lizards Can Be Bred?

Armadillo lizards are sexually mature once their body length is around 3.74inches/95mm.

Do Armadillo Lizards Have A Breeding Season?

Armadillo lizard’s breeding season is usually during the spring between September to October. They will then give birth to one or two live babies in the summer or early fall (March to April).

Armadillo lizards are considered to be ovoviviparous reptiles. This means the egg will develop in their body and they will then give birth to one or two young ones. Furthermore, the hatchlings usually look like a small version of its parent.

How Long After Mating Will An Armadillo Lizard Give Births?

How To Breed Armadillo Lizard In 7 Steps

If you are planning to breed an armadillo lizard, here are some steps that you can follow to make the process easy.

This is because it is very hard to keep the required warm and humid needed by your baby armadillo lizards in a big tank.

All you need is to place the plastic box upside down with a cut-out door. You should also ensure there is a secure mesh top to help keep your lizard in their tank and promotes good ventilation.

You can then place live or artificial plants in their baby box to maintain humidity and where your lizard can climb.

Furthermore, baby armadillo lizards require supplemental heat in their enclosures. They require a daytime temperature between 80-85oF while the nighttime temperature is between 60-70oF.

Moreover, they also need a basking area in their enclosure with a temperature range between 115-130oF.

The humidity level in their enclosure should also be around 45-55%.

Furthermore, young armadillo lizards need access to UVB light and you should provide this for them in their baby box.

Prepare The Female For Brumation

The brumation period in the armadillo lizard is the period where they hibernate. Brumation in armadillo lizards usually occurs under low temperatures when they are inactive.

During the brumation period, armadillo lizards usually sleep for most of the day and even lose appetite.

Although the growth and development of armadillo lizards usually stop during this period, it is believed that it helps induce captive reproduction.

You can prepare your female armadillo lizard for brumation by keeping them in a tank with a temperature range between 56-60 degrees F for 4-6 weeks.

When you are ready to breed your armadillo lizard, you will need to take the male from his tank and place him in the tank of the female. You should keep in mind that the male lizard can be aggressive and even hurt the female during breeding.

Note: if the bite of the male armadillo lizard causes an open wound on the skin of the female, you may need to remove the female immediately.

You will then use water to clean the wound and then treat it with antibiotics until the wound is completely healed. You can then introduce the male afterward.

How To Tell If An Armadillo Lizard Is Gravid (Pregnant)?

Note: handling of gravid female armadillo lizards can cause her a lot of stress. You should avoid handling her during this period unless it is necessary.

Armadillo lizard fertilization usually occurs internally just like other squamates. However, they are ovoviviparous and they will give births to one or two live young ones. The young ones are basically the small version of the adult.

Transferring Your Babies To Another Box

Armadillo lizards can sometimes feed their young ones. However, it is best if you move the baby armadillo lizard to a smaller box for safety.

Although baby armadillo lizards love basking, they may not bask when kept with their parents as they are usually shy. This is another reason why you should transfer them to another box.

Furthermore, it will be hard for them to get adequate UVB exposure because the tank is too big for them. You will need to remove the newborns to a shallow enclosure to help them maximize UVB exposure.

Do Armadillo lizards Give Birth Without Mating

No, Armadillo lizards cannot give birth without mating. This is because the fertilization and development of eggs takes place internally before they then give birth to their young ones alive.

What To Remember When Taking Care Of Baby Armadillo Lizards?

However, the best time to acclimatize them to handling is at a young age.

Will Armadillo Lizards Eat Their Young?

What Do Baby Armadillo Lizards Eat?

Furthermore, you will need to feed a baby and juvenile armadillo lizards every day to aid their growth.