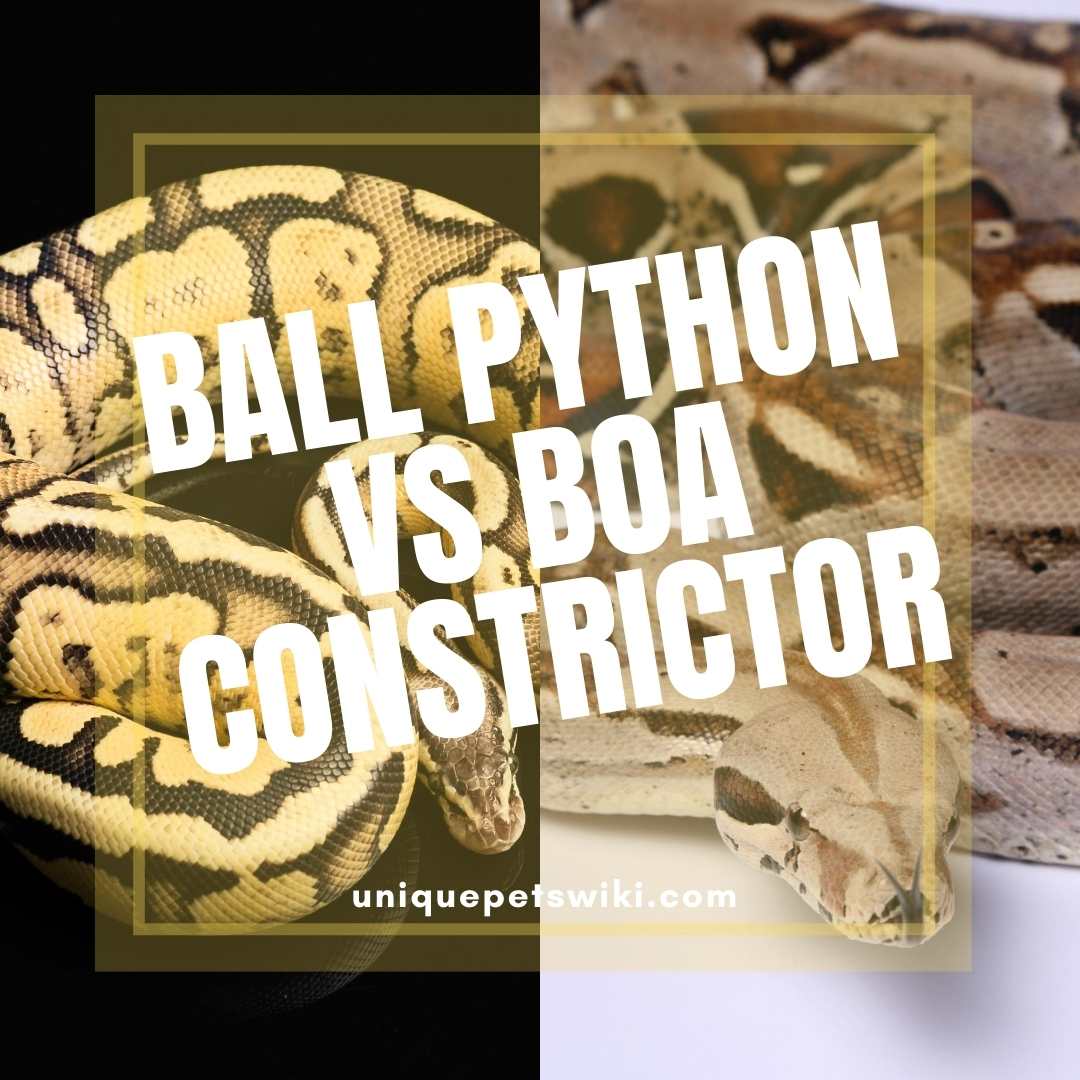 Snakes make fabulous and wonderful pets. But some snakes are just easier to keep and care for than the others. While some species are meant for experienced breeders, others can be kept with ease by beginners. That is the case of ball python vs boa constrictor.

These two species of snakes are kept at homes as pets. They make good pets for both experienced keepers and new herpetologists who find interest in keeping snakes as pets.

Both ball pythons and boa constrictors have some desirable features that make them not just similar but unique and stand out as pet snakes. At the same time, they both have quite a few notable issues that can be a source of challenge to owners who keep them as pets.

In the next few parts of this article, you’ll be exposed to the characteristics of both ball pythons and boa constrictors. Also in this article, you will learn the basic requirements to keep these two snakes as pets. And finally, you will get to know which snake to go for as an ideal pet for beginners.

Yes of course. Both snakes make great pets because they are docile and easy to care for. Apart from this, they are among the most sought-after snake species because of their elaborately ornamented skins and colors.

Boa constrictors are non-venomous species of snakes that are native to the southern and central parts of America. They are called “constrictors” because of their unique method of subduing prey. In the wild, they hunt and capture prey by constricting it to death before eating.

Ball pythons are also non-venomous. They are native to the Western part of Africa (Togo, Benin, and Ghana). These snakes are carnivorous, which means that they feed on a diet of rodents and other animals.

Therefore, getting food for them in captivity wouldn’t be a problem. There are many vendors you can get their feeder prey from. While you will have to offer a bigger feeder such as rabbits to your pet boa constrictors as they get older, you may experience some difficulty getting your ball pythons to eat regularly.

But this is nothing to worry because if you play your role perfectly in proving the right habitat, you wouldn’t have any feeding issues to deal with. In a moment, let’s delve into the features of these two snakes and what it takes to keep them as pets.

Ball Pythons Vs Boa Constrictors – Which One Is a Better Option?

The question of which pet snake makes a better option is a matter of what you want or expect from your prospective snake. Each of these species of snakes although they are docile, have different dispositions and qualities.

They both have different requirements and care levels. You need to understand what is involved in owning them as pets. That way, you can decide which one to pick as a pet. That being said, let’s briefly look at these two species of snakes squarely.

Many snakes go by the same name ‘BOA’, but there is only one boa constrictor. About 50 constricting species of snakes fall into this category- the family of Boidae.

Thus, boa constrictor is just one of them and the only one that its scientific name goes by its common name. They have distinctive physical characteristics that make them distinguishable from other species of snakes.

Depending on the environment or habitat, boa constrictors range in color from red to green, yellow, or tan. These colors are often their background color with saddle-like markings on their bodies.

The saddled patterns tend to become more prominent along the tail. From the snout to the neck, they have a dark brown stripe and vertical pupils that enable them to see in the dark. In the wild, they smell the air and detect prey by flicking their tongue.

They also tend to reflect or camouflage the color of their surrounding environment.

On the flip side, ball pythons are generally black. They have dark backs with dark upper heads, except for the more fanciful morphs which are products of cross-breeding two or more dominant genes together.

On the sides, ball pythons have large pale rounded blotches that are uniformly spaced from the neck to the body and tail. These blotches are always open on the bottom and are separated by dark vertical interspaces that are as well connected to their dark backs.

While boa constrictors hunt for prey by flicking their tongue, ball pythons have special sensitive pits located along the edge of their mouth through which they detect prey.

Many people, especially new herpetologists tend to be afraid of boa constrictors. Perhaps because of their terrific long size once they get to adulthood. Even with this, boa constrictors are not capable of attacking humans.

They may inflict pain or injury from a bite, but not as severe to the point of killing. These two species of snakes are solitary and nocturnal in nature. They live alone and spend a greater part of their day in hides or burrows.

By nature, boa constrictors are good swimmers. They can subsist both in water and on land. However, they prefer staying in drylands than being in the water. Going by dispositions, both snakes are docile in nature and are not prone to aggressively defend themselves.

But boa constrictors are more temperamental than ball pythons. They can bite if stressed or when handled wrongly.

Bigger-sized enclosures are as important to boas as a spacious house is important to humans. An improper cage size can affect their health and longevity.

A standard cage size for adult boas is the type that the width and length is BIGGER THAN or the same as the length of your boa. This is usually 4 feet long x 2 foot wide. This will give the snake room to stretch.

Even if you’re planning to get a baby boa, it’s advisable to buy an adult-sized enclosure. This way, you’ll not need to replace its cage every year as the snake grows.

While setting up their enclosure, avoid using an all-glass enclosure. These types of enclosures are poor in maintaining the right humidity for boa constrictors.

Ball pythons are tropical species of snakes from Western Africa. They are also ectothermic which means that they would need both a basking area and a cooling end to thermo-regulate their body temperatures.

In captivity, they thrive in an enclosure with a basking spot temperature of 88-96° F  and an ambient temperature of 78-80° F. Boa constrictors are ectothermic in nature as well. The right temperature to keep them in captivity is between 82-86F for both day and night.

The ideal basking spot temperature is between 88-90° F with a cool end of 75° F. Since they are both nocturnal animals, supplemental lighting is not required. The right environment that simulates their natural habitat is a dark enclosure with proper heating.

Ability To Live In Groups

Both snakes live in solitude. In the wild, they do not live in groups. Similarly in captivity, they shouldn’t be kept together with other snakes in the same enclosure. They can bite and injure one other if kept in groups.

Owning any of these two snakes is a long term commitment because they both have long lifespans. They both can live for as long as 40 years if given good care. On average, both ball pythons and boa constrictors have a lifespan of 20 to 30 years.

As noted by the University of Michigan Museum of Zoology, boa constrictors are one species of snakes that are very understanding and less demanding, provided that they are well taken care of when they grow very long and big.

Boa constrictors like ball pythons feed on a diet of rodents and other small mammals both in the wild and in captivity. Ball pythons in captivity are often fed rat fuzzies and rat pups at the early stage.

As they grow older, different sizes of rats, mice, and other animals such as gerbils and lizards are given to them. Note that in feeding ball pythons, the actual prey size to feed them is a prey not larger than the mid-section of their body, or it should be the size of their head.

Boa constrictors do not only feed on a diet of rats or mice but will also eat rabbits especially when they grow very big.

While feeding your pet boa constrictors may be a bit expensive as they get older, because you’ll have to feed them with larger prey or multiple feeders. On the contrary, ball pythons are notoriously picky eaters and you may just be unlucky to have one.

Both ball pythons and boa constrictors are sexually dimorphic. What this means is that the adult females of these snakes are longer, bigger, and heavier than the males.

Except you’re ready to care for a snake as large as boa constrictors can get, you shouldn’t be considering owning it as a pet. Ball pythons on average measure 3-5 feet long for females, and 2-3 feet long for males.

In some rare cases, adult female ball pythons can measure up to 6 feet. They weigh between 3-5 pounds. The adult females will weigh more than the males because they are much bigger and heavier.

Unlike ball pythons, boa constrictors give birth to live babies. Their females incubate the eggs inside their bodies and at one reproductive cycle, they can birth up to 60 babies. At birth, baby boa constrictors measure 2 feet long.

They keep on growing throughout the course of their life until full adulthood when the growth rate reduces. Ball pythons on the other hand are oviparous.

They give birth to their young by laying clutches of eggs. They lay only a clutch of eggs in one reproductive season and this is usually about 6 babies.

The longest a ball python can get as an adult is a sizable length of 6 feet. On the other hand, boa constrictors can get to a terrific length of 10 feet or even more.

Most of the people you would find having issues with feeding their ball pythons are probably not providing the right environment. This could be inappropriate temperatures, wrong humidity levels, lack of security through cage decorations, or the absence of accessories such as hides.

Like we said before, your decision will be influenced by what you want and how much of a great keeper you think you would be to your new pet.

Can You Keep Ball Pythons Together With Boa Constrictors?

If you mean to raise the two snakes together as separate pets, YES YOU CAN. But if you mean to have them together in an enclosure, NO.

As a result of habitat loss due to excessive exotic pet trade, boa constrictors are protected species of snakes. In some cities around the world, their ownership as pets at homes are prohibited.

For this reason, before you getting them as pets, be sure that it is legal to own them in the country where you live. On the other hand, there is no restriction on ownership of ball pythons as pets.

In as much as what you want from your pet will determine which species you would finally go for if you wouldn’t have to break a bank, owning these two fantastic snakes is a great deal. It’s all a matter of choice.

All the same, we wish you the best with your decisions and hope that you would be a great keeper.