Another name for Bimini blind snakes is the flowerpot snakes, and this is because it spread over the world by hiding in the soil of flowerpots.

Just like other blind snakes, the Bimini blind snakes are not as interactive as other pet reptiles, but they are unique snake species that you can keep as pets.

The Bimini blind snake is non-venomous snake species, and they are commonly found in Africa and Asia and distributed in other parts of the world.

Its habits and appearance are similar to that of the earthworms, and many people mistook them for one. The Bimini blind snake is also considered to be the smallest known snake species in the world.

Six Hundred Species from around the World by Mark O’Shea. This is a great book about common and uncommon pet snakes you can keep. 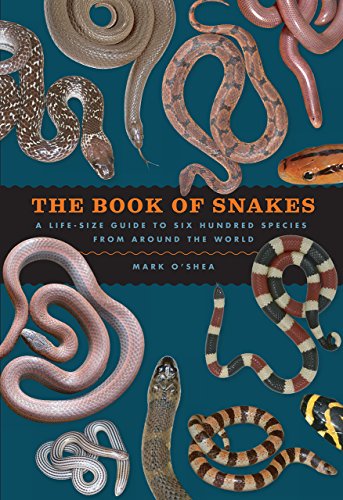 Before we dive into the husbandry and the type of care that Bimini blind snakes need. Some of the basics of the species that you will need to know about are stated below.

Bimini blind snakes exhibit numerous colorations. It has coloration, which ranges from charcoal gray, purplish, light yellow-beige, or silver-gray while the ventral surface is usually pale. The adult Bimini blind snake species usually have shiny and dark brown to grayish-black coloration while its lower surface is lighter. The coloration of the chin, lower lips, the tip of the tail, or throat may range from yellow to white.

Bimini blind snakes may be active at any time of the day. You can find them active both during the day and at night, but they are usually nocturnal. The snake spends its lifetime underground, and once they are exposed above the ground, it will quickly look for the cover of the soil or leaf litter to avoid the light.

Size & Weight: How Big Do Bimini Blind Snakes Get?

The Bimini blind snakes are the smallest in the world and are about the same size as the nightcrawler worm. It can grow to about 4-6.5 inches (10-16.5cm) in length.

Bimini blind snakes are non-venomous and harmless snake species. It may have teeth on only the upper or the lower jaw, but it cannot bite, and it possesses limited defensive capabilities.

Health & Behavior: What Is Common and Unusual?

The Bimini blind snake is quite hardy and does not display many unusual behaviors. Some of the basic behavior and health traits of them are stated below.

Bimini blind snakes, just like numerous other burrowing species, love staying out of sight most of the time, and little is known about their behavior and reproduction. As soon as you dig them out of their burrows, it will immediately try to bury itself again.

Once you hold them, the snake will wiggle wildly, release their body waste, produce a foul smell, or poke the tail spine so you can release them.

If you want your blind snake to show from hiding, you can install something like a tinted moist paper towel or a small hiding place above ground. The Bimini blind snake is usually active both during the day and night but is usually nocturnal.

Just like all other snakes, Bimini blind snakes will shed their skin periodically. Shedding of their skin is associated with growth, but it is also a way that snakes replace damaged scales or repair wounds.

Shedding of the skin may occur from 4-12 times a year while young, and rapidly growing snakes shed frequently.

Snakes shed only the outermost layer of their skin known as stratum corneum. When most snakes are shedding their skin, the stratum corneum comes loose, and the snake will slip out of it, and it leaves an inside-out shed that is thin that you can nearly see-through.

But in the case of blind snakes, it has an exceptionally thick stratum corneum, and its shed will come out in bits and pieces that are similar to a number of rubbery rings.

As the Bimini blind snake approaches the shedding stage, its skin pattern becomes dull and dark. During the pre-shed period, the old layer of skin is fragile, and it tears easily while the new skin is not mature.

You should avoid handling them and be careful if you want to handle them. If your snakeskin fails to come off, you can soak them in shallow, lukewarm water for 30-60 minutes and then manually remove the dead skin.

Snakes can stop eating for a variety of reasons. Your snake may stop eating if they are entering a shed cycle or passing through seasonal dormancy. It may also refuse food if it has a reproductive condition or it is ill.

You do not have to worry if your snake misses one or two meals as it takes a long time before they can starve.

Your snake should start eating after shedding or depositing their eggs, and if not, it is time to look for the problems that are preventing them from eating. Some of the things like parasites or respiratory illnesses can make your snake not to eat.

Bimini blind snakes are usually healthy, but they are susceptible to varieties of illnesses just like other snake species.

By maintaining good hygiene of their enclosure, you can help avoid many illnesses, and you can call your vet to treat any illnesses that may occur. Some of the symptoms that you can keep an eye for are listed below.

An ideal enclosure for keeping your snake is a 2’x3’ terrarium or a 10-gallon aquarium. The snake spends most of its time buried in the soil, and you can fill the terrarium with forest bedding, coco-husk, or peat.

You can include hiding places like caves or boxes in their terrarium. You can also add plants around their enclosure to create natural conditions and supply the enclosure with a bowl of water that the snake can soak in.

Bimini blind snakes prefer warm habitat, and you should provide a temperature around 70-80 degrees Fahrenheit during the daytime. You can supply a side of the terrarium with warmth so the snake can choose between a warm and cooler region anytime.

You can also provide lighting for 12 hours during the day and turned off 12 hours at night. It is because Bimini blind snakes are active early in the morning and evening.

What Is the Bimini Blind Snake Diet?

Bimini blind snakes are carnivorous animals, and they feed on eggs, larvae, and pupae of termites and ants. In the wild, it feeds mostly on small invertebrates like small beetles, termites, larva, ants, and small worms.

Price: How Much Do Bimini Blind Snakes Cost?

The Bimini blind snake prices vary from one place to another. The price range of the snake from different pet stores varies from $9.99 to $29.99. Their price may vary according to their age or appearance.

Six Hundred Species from around the World by Mark O’Shea. This is a great book about common and uncommon pet snakes you can keep.

Bimini Blind Snakes as Pets: Are They Good Pets?

First, it is hard for a beginner to know if they are eating enough since they remain hidden in their enclosure. It may, in turn, cause death if your snake does not eat.

Apart from those mentioned, it will make a rewarding pet because they stay small and are unobtrusive. It does not require a lot to stay happy and is extremely low maintenance.