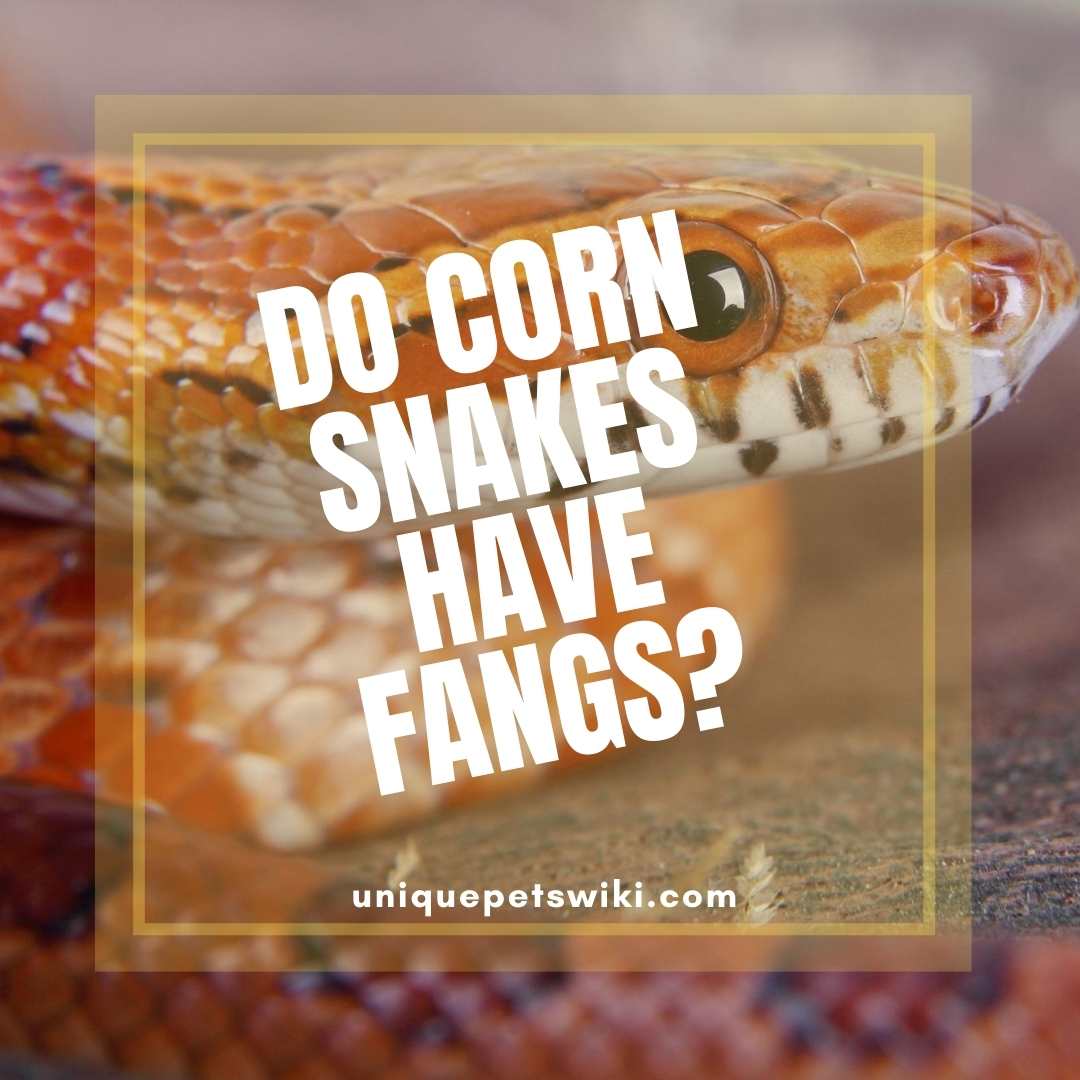 Corn snakes are a perfect snake species suitable for beginners because of their docile nature. It is named corn snake due to the corn-like patterns that are on its skin.

Corn snakes are not a harmful snake species and will make a wonderful pet. They do not have fangs but teeth since they are not venomous.

Addition, corn snakes are docile and will not harm you. However, it can bite if they are hungry, stressed, or when you passed your boundaries. The best thing is that a corn snake bike will feel like the pain you will experience from a cat scratch.

Corn snakes are considered to be among the least imposing snakes that you can keep due to their size.

It can grow to about 2.5 to 5 feet in length and have a lifespan of 5-10 years during adulthood.

A male species usually larger than the females, and it will take them about two years before it can reach its full length. Everything that you need to know about corn snake fangs and growth is stated in the article.

Do Corn Snake Have Fangs?

Corn snakes are not venomous, and its fangs usually are called teeth. The fangs are aligned in a row on the sides of their mouths and are of the same length.

Corn snake fang is used for moving prey back into its throats so that the snake can easily swallow and digest it.

Do Corn Snakes Fangs Break Off?

However, this is an entirely normal thing as snakes lose their fangs so that new ones can replace them.

Breaking of fangs in snakes shows that your snakes are always ready to hunt for prey.

However, lots of pet owners worry when their snake fangs break because they thought it would inhibit the snake’s feeding needs and abilities.

You should not be worried because another fang will grow back so that their eating and hunting abilities will not be affected.

Snake fangs usually get dull and old, and it will stop working well over time.

The teeth overuse without proper care can then cause malnutrition. This is the main reason why snakes shed their fangs so that they can adequately hunt for prey and feed themselves.

The Death Rate of People Dying from Corn Snake Bite

Corn snakes are not violent, venomous, and small-sized snakes.

It has small teeth and will only eat small rodents, and there are no recorded deaths from corn snake bites.

Corn snakes are not even violent and will only attack when stressed, feel threatened, hungry, or upset.

Corn snake bites have no harmful qualities, and you can be affected negatively by a bite if you do not clean and bandage the wound well enough, it can be infected.

Another reason why snakes cannot kill humans is that they are small and have small mouths. It can only feed on small rodents such as mice, which is the only thing that will fit its mouth.

What to do after Getting Bitten by a Corn Snake?

Everything will be perfectly fine if you get bitten by a corn snake.

Corn snakes are harmless, and they have super small teeth with bites that will not get worse than cat scratch. You do not need a fancy treatment like surgery or stitches after you get bitten by a corn snake.

Its teeth are small, and bite will not go deep if they end up biting you. It is very easy to deal with when you compare the corn snake bites to other snakes.

After you get bitten, you should not freak out because this can even scare your snake even more.

You will need to maintain a calm manner so that your snake will know everything is fine, and it will be easy for it to let go and relax while you put it back in the cage.

If your snake does not let go after latching onto your skin, if you stay calm, the snake will know everything is okay.

Do not try to yank it off or be forceful to pry it off wherever it bit you. By being forceful, you will tear the skin and make the wound expand, and you will then need to patch it with a Band-Aid.

This might then take longer to heal due to the extra damaged skin that is around the bite.

Running water over their head

One of the ways you can release its jaw is by gently running water over the snake’s head. Another way is by getting some tweezers or pencil to try and pry the snake’s jaw open carefully.

You should avoid using your hand to do this because squeezing the snake can frighten it. You will also harm your snake’s delicate jaw by using your hand, which will affect their eating and cause lots of vet bills or even kill your snake.

After you have released its jaw, you can then put it in its enclosure to immediately tend to your small wound.

You can tend to your wound by washing it with soap and water. This will prevent infection, and the bacteria spread. After cleaning the wound, bandage it just like any other wound. You can then add Neosporin and band-aid over the wound to ensure you do not get infected later.

If you eventually get infected, head to your physician for medical treatment, or learn how to remove the infection. If your wound feels unusual, see your physician.

Bonous tip: what to do after getting bitten by snakes.