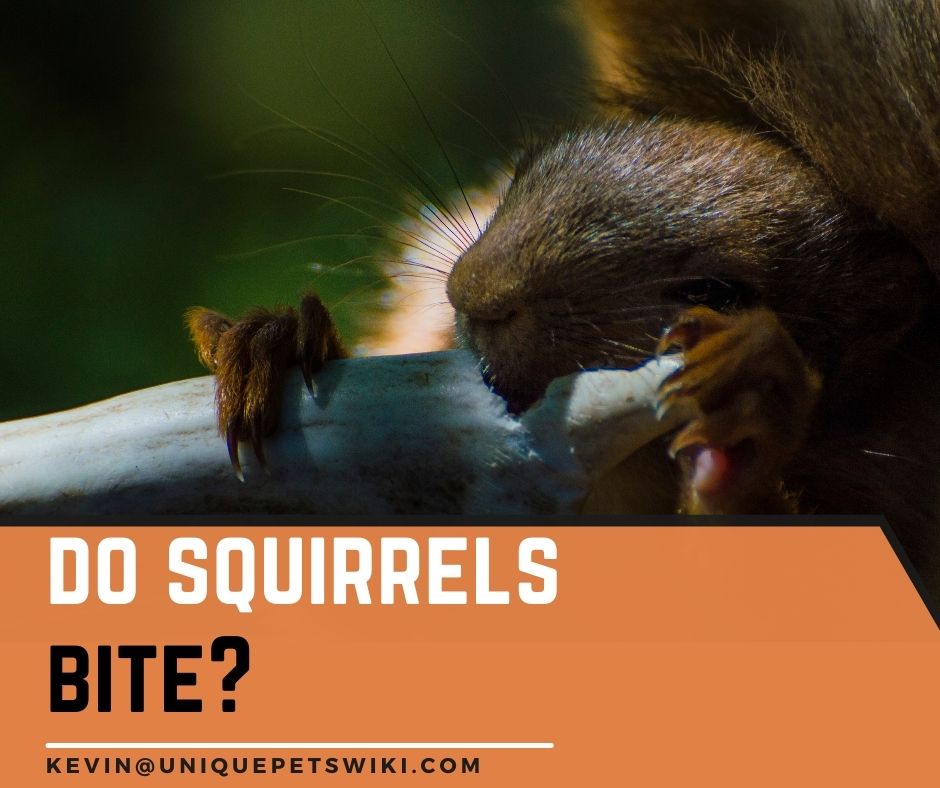 The vast majority of animal bites result from provoked animals. Many animal species can bite humans, although the most significant are those proceeding from animals, like venomous snakes. Speaking of squirrels, do they bite?

An immense majority of animal bites emerge from family pets, but wild species do also bite humans. Some animal bites are infectious to people and can be life-threatening if there is no treatment.

Does it bother you whether squirrels can bite? I write this article to answer your question and shed light on squirrel bite issues. Keep on reading!

A healthy, normal and happy squirrel wouldn’t bite unless provoked or threatened. And when a squirrel bites you, depending on the health status of the squirrel, it can be dangerous and may not be. This is because squirrels are known to carry several dangerous disease-causing bacteria and viruses such as Necrotizing fasciitis, typhus, leptospirosis, and even rabies.

Has a squirrel bitten anyone? Seeing how squirrels greedily nibble nuts with their large and sharp teeth, you may wonder if a squirrel can bite you.

Although it is rare for squirrels to bite people, these rodents quickly get angry depending on the situation in the environment, and they can bite you. For instance, any threat makes squirrels faint-hearted and may take flight or bite for defense.

Why Do Squirrels Bite Humans?

Squirrels are rodents that are popular for their ever-growing front incisor teeth. We often see these furballs nibbling shelled nuts and seeds and other hard materials to file down their teeth.

With their bushy tail, beady eyes, and mellow personalities, it’s tentative to believe that squirrels can be dangerous. Many people have a strong friendship bond with squirrels because they find them charming and pettable.

However, squirrels are wild creatures, and if they are startled by you or another animal, they may bite in defense. Below are in-depth reasons why squirrels bite humans.

When Squirrels Look for Food

Wild squirrels frequently visit environments that are welcoming to them. It is food that attracts these critters to our homesteads. Fortunately, the majority of enthusiasts are not reluctant to feed their little guests.

Squirrels don’t embrace unfamiliar people. But they quickly lose their instinct of backing away from a person that consistently feeds them. They associate this person with food.

Food aggression is a territorial conduct a squirrel displays when gobbling food and becomes extremely defensive towards its food. If you try to remove the food as the squirrel is busy gobbling it up, it gets provoked and may bite you.

A hungry squirrel may approach you and become aggressive to get some food. It is also possible for pet squirrels to bite you if you joke around with their food at its mealtime.

Needless to say, squirrels shy away from human contact. These animals perceive us as predators. More often, when a squirrel approaches a person, it takes to its heel out of fear.

Nonetheless, if the rodent is cornered, it will not hesitate to attack and bite you in self-defense.

These rodents have the fight or flight reaction to a perceived threat or attack to survival like humans.

Are Squirrel Bites Harmful to Humans?

After knowing that squirrel bites are harmful, squirrel diseases can be worrisome.

Wild squirrels frequently come into contact with human beings. However, it becomes an issue in case of a squirrel bite, which is an avenue for diseases to humans. So, what are the diseases of squirrels?

Moreover, according to an article published in the Journal of Veterinary Infectious Diseases, squirrels are carriers of Mycobacterium lepromatosis, a causative pathogen for leprosy. Hence, humans are at risk of contracting some diseases from squirrels through squirrel bites, contact, or droppings.

What Diseases in Squirrels Can Be Transmitted to Humans Through Bites?

There are numerous diseases affecting squirrels, but only a few are dangerous to human beings. Infected squirrels are likely to transmit a disease to healthy squirrels or other animals they encounter during feeding.

Objects like the squirrel feeders may also be contaminated with pathogens and become infectious to other healthy squirrels. Squirrels transmit the following diseases to humans through bites; rabies, Lyme disease, and tularemia.

Squirrels pass the pathogen causing tularemia through bites. Tularemia is a bacterial disease infectious to humans.

It is vastly rare for squirrels to contract rabies, but some squirrels have been reported to suffer from rabies. Rabies can be transmitted to humans through squirrel bites, although it’s rare too.

Rabies is a viral disease affecting the central nervous system and eventually the brain. The early symptoms of rabies are insomnia, head pain, distress, and weakness. If the disease progresses to the brain, it results in death.

What To Do If Bitten by A Squirrel?

You do not have to panic and think that you are dying because a squirrel has bitten you. Squirrel bites are treatable, and most of them don’t pose threats to humans.

Any would, whether minor or severe, need to be appropriately handled. Here are some steps to follow in case a squirrel bites you.

If a squirrel attacks you, you should wash the wound thoroughly with clean water. Cleaning the wound helps to ward off infection.

Use antibiotics to treat the wound. Apply a thin layer of antibiotic ointment on a clean wound, which helps to fend off infection.

It is then recommended to dress the wound to fasten healing. Waterproof bandages and gauze are effective for minor wounds, while staples are suitable for deep wounds.

Step#3: Keep an Eye on the Wound

You should be able to observe signs of healing on the wound within three days. It should be free from discharge, and a scar of healing is visible after around one week.

A wound that is not healing may continue to bleed or have ceaseless discharge and emit a bad smell or have discoloration. Additional signs include perpetual pain, inflamed bite site, and inflammation.

Above are all signs of infections, and such a wound requires you to go to a hospital for analysis.

How To Avoid Being Bitten by A Squirrel?

You do not want your place to be hospitable for squirrels to avoid squirrel bites. Wild squirrels are unpredictable and can approach you aggressively when hungry seeking food from you. But this only happens if you are used to feeding these rodents.

The good news is, there are a couple of measures to avoid being bitten by squirrels. Have a look at the following measures.

Do Not Feed the Squirrels

Never at any time attempt to feed a wild squirrel with your hands. Chances are, the rodent might bite your finger unintentionally or just become angry and bite you.

Sometimes we offer foods that are the least favorite to squirrels. While this can make a squirrel unhappy, such foods will also not help these critters. Therefore, if you can avoid feeding squirrels, they won’t bother you again.

Do Not Attempt to Touch or Handle a Squirrel

Note that a wild squirrel’s mood can shift unpredictably or due to something minor. Mother squirrels are famous for heavily guarding their babies and can attack any intruder, including humans.

However, we should also be cautious about squirrels that come to visit our homesteads. Please don’t touch them because you have no idea about their mood. You are also at risk of getting parasites that can cause diseases if you touch them.

Prevent Squirrels from Coming to Your Home or Garden

Squirrels will not only visit our residential areas for food, but they also establish their homes in the attics or gardens. Squirrels that find their way to our house or garden can do something that irritates you.

These animals are destructive; they can chew through the water pipes and electric wires in the house, exposing your home to a risk of fire and water leakage.

A garden is also a welcoming place for squirrels, especially if crops are growing. They mess up with the plants, exposing people to vast losses.

If you find it challenging to stop feeding squirrels, then you need to have a pair of thick gloves. Put on the gloves every time you approach or feed a squirrel.

The gloves are anti-bite and will therefore protect you from squirrel bites. It’s also advisable to use gloves to enjoy playing time with your pet squirrel.

Will a squirrel bite a human?

A healthy and normal squirrel will not just bite a human unless it is provoked or threatened. If a squirrel is to bite you, the chance of transmitting a disease-causing virus such as rabies is very slim since they rarely carry the rabies virus. And even when they get the rabies virus, the squirrel will die in a short time before it can transmit it to humans.

Are squirrel bites dangerous or harmful to humans?

Squirrels all over the world are seen as cute and friendly pets. But no matter how friendly they are, they are not completely harmless to humans. Squirrels according to a case report by the Pediatric Oncall Journal have been proven to carry Necrotizing fasciitis which is a serious health complication from its bite and can lead to serious local reactions or even worse health issues if not treated on time.

Therefore, if you get bitten by a squirrel, ensure that you treat it promptly to avoid further complications.

Are squirrels dangerous to touch?

You can’t get infected by just touching a squirrel. People keep squirrels at homes as pets while others just love seeing them around in their backyards. A squirrel can only become dangerous and harmful to you if it is infected with a disease-causing virus or bacteria or if it bites you or if its claws pierce through your skin.

When you sustain an injury from a squirrel’s bite or piercing with the claws, this is only when you should worry about getting infected with a disease-causing bacteria or virus. This is because squirrels are known to be carriers of several harmful bacteria and viruses such as Necrotizing fasciitis, typhus, leptospirosis, and even rabies.

Will a squirrel attack me?

Yes, squirrels can attack people and will attack you, especially if it is provoked. There have been several reports in the US such as New York City of aggressive squirrels attacking people both in the park and their neighborhood.

While squirrels are gentle creatures with warm personalities that win our attention, it is good to know that sometimes they can be dangerous. A squirrel can bite you when provoked or bite your finger without meaning it when feeding on your hand.

Squirrel bites can be dangerous or not. A wound that persists in healing could be due to an infection.  Therefore it needs to be taken to a doctor for analysis.

It is possible to have a peaceful co-existence with squirrels by applying measures like not touching and handling squirrels, using anti-bite gloves to feed squirrels, etc.

Squirrels can transmit diseases such as rabies and Lyme diseases to humans through bites. Also, squirrels can spread parasites to us if we touch or handle them.