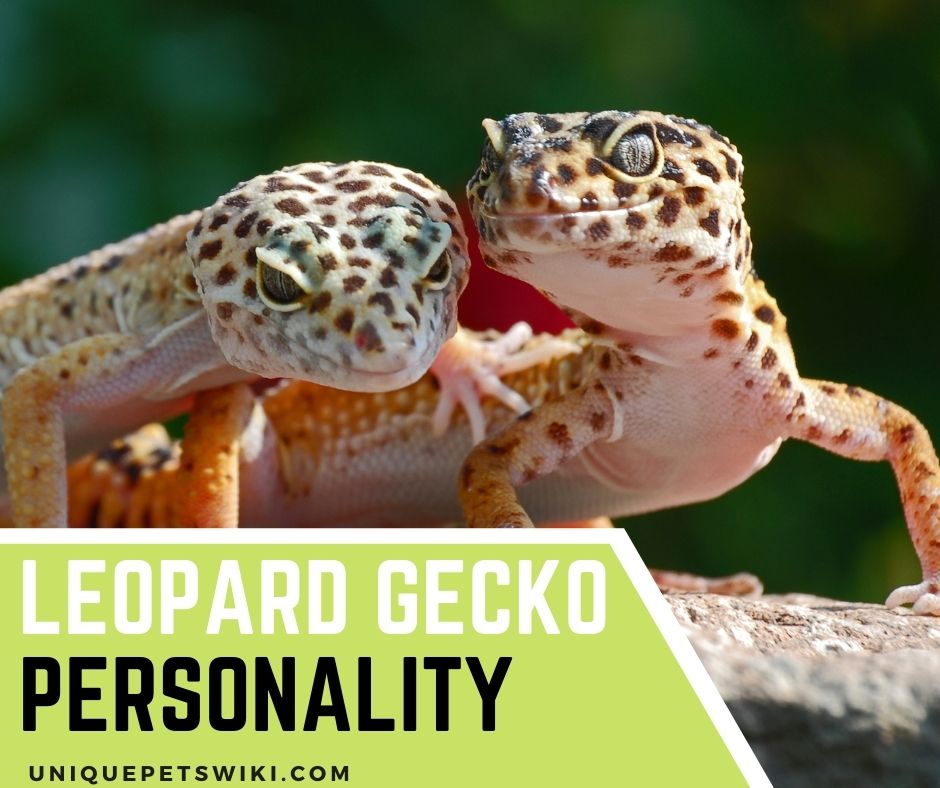 Leopard geckos are ground-dwelling lizards and originate from Pakistan, Afghanistan, Nepal, and India. They are one of the most popular lizards kept as pets by beginner and experienced hobbyists. This is because they require minimal care when compared to other lizards.

Apart from this, leopard geckos have an incredible personality, which you will love. They are cute, friendly, docile lizards, and they display interesting behaviors, which makes raising them fun and rewarding. Furthermore, they adjust to being handled quickly, which makes them suitable for families.

Leopard geckos make a fantastic pet due to their personality. In this article, we will highlight everything you need to know about leopard gecko personality.

Leopard geckos are cute and docile lizards with fascinating behaviors, making them a popular pet among hobbyists. Leos originates from northwest India, Iran, Pakistan, Afghanistan, and Iraq. They are usually found living on the rocks.

Leopard geckos are shy lizard species and use their leopard print color to stay hidden in the wild. Furthermore, they can stay hidden for a long time because of their ability to store fats in their tail.

Just like a crested gecko, leopard geckos have a small triangular-shaped head with a long body and segmented tail. They also have a slender digit with long claws. Leopard geckos are available in a wide range of morphs.

Leopard Geckos are known for being animals with many interesting behaviors and endearing vocalizations, they are also very cute, docile, and friendly little lizards. Male leopard geckos are usually larger than females, and they can grow to around 7-11 inches while weighing 70-100g.

On the other hand, females are around 6.5-8 inches long and can weigh around 40-90g. There are also giant morphs of leopard geckos that can grow to around 12 inches long and weigh 175g. Leopard geckos have a long lifespan and can live for around 15-20years in captivity.

You can buy common leos for around $50, while you will need to pay more than $400 for some rare leopard gecko morphs.

Generally, it is quite easy to care for leopard geckos as they are very hardy and don’t need a lot of cage maintenance. Leos have a docile temperament, and it is quite easy to tame them. Like other geckos, leos don’t have sticky toe pads and cannot climb walls, but they have eyelids.

Some of leopard geckos’ personalities are stated below.

Leopard geckos are ground-dwelling geckos, and they have a docile temperament. It is quite easy to tame and care for a leopard gecko. Furthermore, they are a hardy lizard species, so they are a popular lizard pet for beginner hobbyists.

As stated before, leopard geckos are docile and rarely bite. However, baby and juvenile leopard geckos can bite, especially when snatching food from your hands. An adult leopard gecko may also bite if you interrupt their breeding displays or make sudden movements during the handling session.

The good thing is that leopard gecko bites are not that serious. Leopard geckos can also self-amputate their tails as a defense mechanism when they feel threatened.

Although a new leopard gecko can be skittish and jumpy at first, it is quite easy to tame them. When it comes to taming leopard geckos, all you need is to learn a few tricks and be patient with them. Most leopard geckos become docile and calm if you handle them regularly.

The taming process is usually different for each gecko and can take 3-6 weeks before your gecko becomes fully tamed. However, some geckos become tame in the first week, while it can take a year or more before some become fully tame. There are even some leos that will never become fully tame.

If you make a serious mistake like pushing your gecko away or scarring it, you will need to start the process all over again.

Leopard geckos make different sounds when communicating with each other.

Movement Of Their Tails

Leopard geckos can also communicate with their tails. Some of the ways that they communicate are stated below.

Leopard geckos usually wave their tails slowly as a defensive warning when threatened. This means something threatened your gecko, and it is waving the tail to look larger and to capture the predator’s attention to the tail.

Leopard geckos rattle the tip of the tail rapidly to show that they are excited. This is also common during the breeding season as the male tries to get the attention of their potential mate.

Generally, leopard geckos usually try to climb their glass walls. This is normal behavior, but it can also signify that they are not comfortable in their environment. Once you notice that your gecko tries to climb their tank, you should check out the following things:

Licking And Flicking Of The Tongue

Leopard geckos like to lick everything they come in contact with. This is because they have a Jacobson’s Organ, also called Vomeronasal organ, at the roof of their mouth. Leopard geckos usually flick their tongue to pick moisture particles from the air and to detect odors and scents.

This means your leopard gecko smells their environment with their tongue.

Leopard geckos are crepuscular and nocturnal creatures. This means they are usually active at dawn, twilight, and night. In the wild, leopard geckos hide under the rocks during the day because the temperature is very high.

However, when the temperature drops and during the nighttime hours, they will be active and forage for food.

Leopard geckos are solitary animals and prefer to live alone. The male leopard geckos are usually territorial and will fight any male kept in the same space. The fight can lead to injuries, tail loss, and even death.

Furthermore, if you keep males and females in the same tank, they will most likely mate, or the male will try to mate with the female. This is why it is best to house each leopard gecko in a different enclosure.

They Have Moveable Eyelids

Unlike other geckos like crested geckos house geckos with fixed eyelids, leopard geckos have moveable eyelids and can blink. This means leopard geckos usually close their eyes to moisten their eyes, sleep, and protect them from harm.

Leopard Geckos Can Drop And Regrow Their Tails

Leopard geckos drop their tail whenever they feel threatened or attacked to help get away from a predator. The best thing about them is that they can grow back their tail. However, it may not look as healthy or plump as its original tail.

Unlike other geckos, leopard geckos don’t have sticky pads on their toes to crawl up vertical surfaces. This means it can be hard for them to climb up a tall rock quickly like other geckos.

They See Color In The Dark

Unlike human leopard geckos can see colors in the dark. This is because they are crepuscular creatures and rely on their eyesight and smell to hunt for prey at night. Another thing is that they can easily spot predators at night to help aid their escape.

They See Lights Invisible To Humans

You Can See Through Leopard Geckos Ears

Leopard geckos have a transparent canal that connects their ears. This means when you look through your leopard gecko ear, you will see the other side.

Leopard geckos are a popular pet choice for hobbyists because of their docile temperament and fascinating personality. They are a rewarding pet and beautiful lizard, and their smile will surely lighten your day.

You can comment below if you have any questions or comments about the leopard gecko personality that we failed to mention in the article.