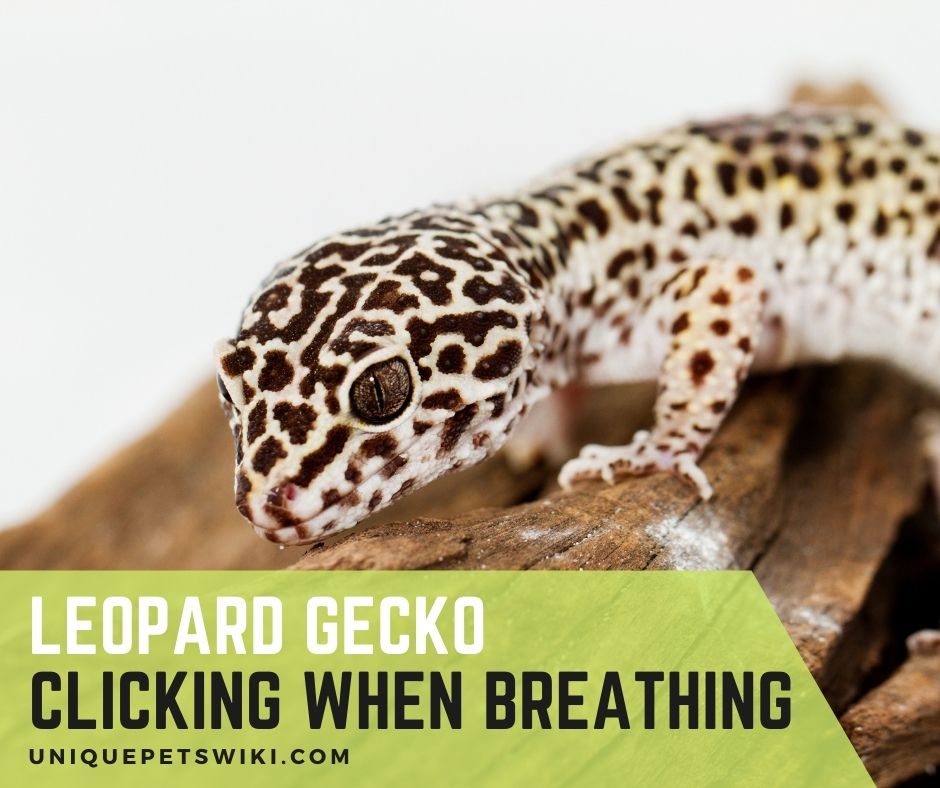 you might be wondering, leopard gecko clicking when breathing, is it normal? If your leopard gecko is only making a clicking sound but breathing fine, this might be a sign that he’s upset with the way you’re handling him, stressed, or just want to get your attention.

However, if the clicking sound comes with breathing difficulty such as gasping or faint breathing, then rush him to the vet. Symptoms like this are always a sign of respiratory disorder.

It’s okay to get worried when you hear your pet leopard gecko make strange sounds or when you see your pet in pain. The good news is that if you know what is going on with your pet, you can as well know what to do to help.

After reading this article, you should be able to tell the difference between normal and abnormal sounds in pet leopard geckos. Keep reading.

Do you know that leopard geckos can hear their owners and they are one of the species of reptiles that are known to love chatting/communicating?

They love communicating with not just their owners but also with their environments including fellow geckos. To pass information to their owner or other geckos they make various sounds.

They either chirp, squeak, scream, or click. Each of these sounds communicates one thing or the other such as:

The clicking sound is often associated with stress, being threatened, or just being unhappy. This is a normal behavior provided the reason for the sound is just that your pet gecko is stressed or unhappy.

But when some other signs are noticed alongside the clicking sound, you shouldn’t take it lightly.

Is It Normal If Leopard Gecko Clicking When Breathing?

To some extent, it can be normal and can be abnormal. It all depends on what other signs your pet leopard gecko is exhibiting. Leopard geckos make different sounds at different times and for different reasons.

Some of these sounds such as screaming, chirping, and squeaking are normal sounds while some are abnormal sounds. But most importantly, the abnormal sounds are not often in isolation. There are always other odd signs that’ll accompany the strange sound.

Hence, trying to identify a problem based on the strange sound alone is misleading. To be able to ascertain what is wrong with your leopard gecko, you have to take into consideration other symptoms or body language.

As earlier stated, if your leopard gecko only makes the clicking sound without any other odd behavior such as faint/shallow breathing, gasping, mucus discharge, and many others, then it’s likely that your gecko is unhappy, stressed, or feeling threatened.

In this case, the best thing to do is to leave the lizard alone and only observe its behavior from outside the cage at a close range.

However, if the clicking sound is accompanied by breathing difficulty, loss of appetite, lethargy, or any other odd symptoms, then your lizard is suffering from a respiratory infectious disease or a couple of other diseases.

In A Nutshell, A Clicking Sound When Breathing With Difficulty Breathing, Limping, And Any Other Sign IS ABNORMAL.

Is that a bad sign? Not really! Some signs to tell your leopard gecko health is getting bad are listed in signs of dying leopard geckos. You can check it!

Yes, they do make a clicking sound at night. Leopard geckos are nocturnal animals. But research has proven that they are more crepuscular in nature than they are nocturnal.

What this means is that while you’re about to go to bed or deeply asleep, they are up and exploring their habitat. This clicking sound at night shouldn’t get you worried especially if your leopard gecko has made the sound before during the day.

However, if you’re not keeping a leopard gecko at all as a pet and you suddenly hear one click in your house, then you should know that you have had a gecko come visiting.

What Other Sounds Do Leopard Geckos Make?

There are a couple of other sounds that leopard geckos make to communicate their feelings to their owners and other geckos. These sounds include:

These sounds in leopard geckos are associated with a feeling of threat. Scientists believed that leopard geckos made these squeaking and chirping sounds in the wild to ward off predators when they feel threatened.

Always take your time to examine your gecko to know if it is hurt or injured. You can only be less worried about the sounds if you’re sure your gecko is fine.

Another reason leopard geckos make a chirping sound is during mating/breeding season when they want to make a courtship invitation to a female.

A frightened or stressed leopard gecko is likely to scream. Especially if your gecko is new to your home.

Nonetheless, this screaming sound should reduce or stop once your pet settles in and gets used to you.If this doesn’t stop, identify the source of stress in its enclosure and fix it to reduce the stress.

Note that aside from making a screaming sound, a stressed leopard gecko will have a weakened immune system and thereby making it easy for diseases to strike.

Fully understanding your Leopard will help you better take care of them. As a suggestion, we would recommend you to get a good Leopard gecko handbook.

Note that although the book will not make you to become an expert, it’ll help you avoid some common mistakes new pet lizard owners make.

If you come across this article when your leopard gecko hasn’t yet made the clicking sound or any other sound, be expectant. It’ll happen someday. It’s a natural thing that must happen.

In their lifetime they’ll make different sounds to communicate their feelings both to their owners and to other geckos. These sounds as discussed include squeaking, chirping, clicking, and screaming and they mean different things.

As a matter of importance, while these sounds in isolation are normal sounds to communicate feelings of stress, unhappiness, or readiness to mate, be observant to know when your leopard gecko is not feeling well and take it to a vet.

Such include clicking when breathing alongside gasping or faint breathing. I trust that you’ve found this article helpful as always. Best of luck with your pet leopard gecko.