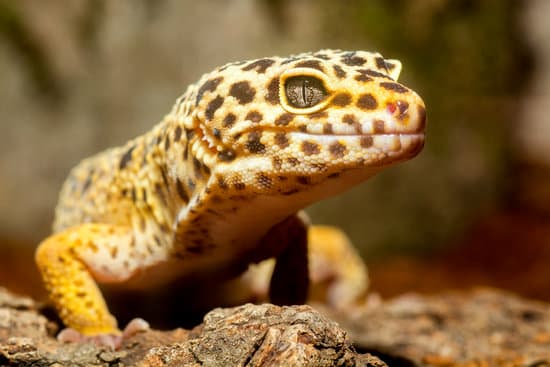 If you are new into the leopard gecko ownership, it might be alarming to hear them make different sounds and noises. You may hear some screaming or squeaking sounds made by your pet leopard gecko, and wonder what could be the cause. Indeed, this article will shed light on the reasons why they make the sounds.

We will also highlight the different sounds and their meanings, and hope that by the end you will have your questions answered. You will know what your leopard gecko is trying to communicate with you.

One thing you must already know, or expect from your interaction with the leopard geckos is that they are not the most vocal pets.

As such, hearing them make some sounds from time to time will make you want to explore the reasons.

At times, the sound may come as something you would never expect from the pet lizard. You can hear them chirping, screaming, and squeaking.

While the sounds may be odd, they have different meanings, and it is important to understand them.

What does it mean when your leopard gecko screams?

Screaming is one of the most concerning sounds made by leopard geckos for the owners. It may be quite loud, which may make you think that your pet is in pain.

You need to know that the screaming or a screeching sound that your pet gecko makes means that the pet is getting into a defensive mode. It shows that the pet is threatened, frightened, or in a highly stressful state.

It would be best for you to eliminate or try to stop the cause of the stress. The scream means that the gecko is active and can identify threatening elements. It could be a simple fly in the vivarium or an intruder.

You may find the screaming happening when you try to interact with your leopard gecko, which is expected to end when they get used to you.

Why do leopard geckos scream?

The screaming that your pet leopard gecko makes is a simple way of communicating. They are either informing of their discomfort or threatening an intruder. The sound they make acts as a way of dealing with the threat and acting defensively.

It is the nature of leopard geckos to be defensive, and this explains why they get naturally spoked when they see something coming from the above. As such, they not only scream when this happens, they also become evidently stressed.

Your pet may feel threatened

As earlier mentioned, geckos are pretty defensive animals due to the natural setting where they live in the wild. They are always on the watch for predators, which also makes them significantly offensive.

Your pet leopard gecko will feel threatened anytime it sees something larger than its size. This means that even you as the owner, your pet leopard gecko may see you as a threat. As such, anything within the house may be threatening to your gecko including your cat or dog.

You may not hear the gecko make a screaming noise each time there is something or someone larger than them, but anytime that they do, there is a high likelihood of such presence. As such, if you hear it scream, you can check on it, if you are actually not the perceived threat.

At times the threat may be outside the tank, but at other times the threat could be another lizard that you have placed within the same tank. When you put two leopard geckos together in a tank it is a gamble on whether they will get along or not.

When the screaming is frequent within the cage where you have your leopard geckos cohabiting, it would be ideal to check whether the other gecko is a threat. As such consider moving them into different enclosures before they start fighting.

Cohabitation in itself is not a problem for leopard geckos, but there is always a chance that one will seek dominance over the other. If things escalate, it may lead to fights and you need to act before this happens and separate them.

Crickets in the tank may also make your leopard gecko scream due to the way they act. The jumpy nature of the crickets may be seen as a threat. Crickets may also bite the gecko or stress it as they jump up and down.

When you look at a group of leopard geckos, they probably look the same and share most of their traits. Their behaviour is also most likely the same. However, a lot of these pet geckos have their unique personalities, and you may find that they dislike some things that you do.

It has nothing to do with all the leopard geckos, but just a personality issue with some of them. For instance, when it comes to feeding, some leopard geckos will enjoy munching on dubia roaches while others do not.

It does not mean something is wrong with the gecko, it only shows that they have developed personalities and they can choose what they like or dislike.

The same applies when it comes to holding. Some leopard geckos enjoy being held, but others don’t. As holding them, they may not only scream, but they may also poop as a sign that they want to be put back into the tank.

When you find this to be the case, and it happens that your leopard gecko screams as you try to pick them up, then consider leaving that part out. Their dislike of being held could be the reason.

You need to take time and develop a bond with your pet, which will lead to increased trust from the gecko. Over time, the screaming should cease as they get used to you.

Reaching from the top

What type of tank do you keep your pet leopard gecko in? The defensive nature of lizards makes them spooked when something is coming towards them from the top. You might see them start screaming and become stressed out when this happens.

As such, it is ideal to have a tank with a door that opens at the front side instead of the top. You can get the tank repaired, or simply get a new one that opens from the front.

It may look like a major change for such a small animal, but you need to understand that stress is highly injurious to leopard geckos. As such, getting the right type of tank for the pet will add comfort for you and your pet.

Please do not be deceived by the cute nature of the scream as it is not there for entertainment. You need to consider having the right environment for the pet, and this will also eliminate other concerns that may arise.

What to do when my leopard geckos scream?

You need to understand what is causing your pet to scream for you to find a solution. Since there are multiple issues that could cause the screaming, there are also multiple ways of dealing with it.

You must ensure that your leopard gecko can trust you. It is common for these pets to lack trust at the beginning, and you need to develop it. They may also lose trust in you over time, which you must avoid.

If your leopard gecko associates you with a bad experience, it will lose trust in you. Trust is inherently important, and it becomes hard to care for them without it.

They can associate loud noises to you, and you need to avoid them at any cost. For instance, if you play loud music and proceed to handle them, they might associate the noise with you.

You need to avoid any noise that could penetrate the cage. You can look for soundproof foam blocks that will absorb the noise in the enclosure.

If the leopard gecko is cohabiting, check whether they are fighting. You may want to separate males since they are highly domineering, and they will look to control the enclosure. If there are signs of fighting or bullying, you need to separate them too.

Avoid leaving crickets in the cage for extended periods. When feeding your leopard gecko, remove the additional crickets if it does not eat them. To avoid having to do this, only put a small number of crickets in the enclosure in line with the feeding needs.

How do I know if my leopard gecko is stressed?

A few pointers or clues to look out for include:

Similar to people, your pet leopard gecko can get stressed at times. Understanding this and being able to identify it will make it easier for you to assist it.

Typically, a healthy leopard gecko is docile and calm, which makes it easy to handle. When it gets stressed, it is difficult to handle.

Watching the immediate signs mentioned above should help in identifying potential stress. Once you feel that the gecko could be stressed, you also need to find the stressor.

The longer your animal remains stressed, the unhealthy it will become. Stress lowers the gecko’s immune system, which exposes them to potential health problems.

Some of the elements that may stress your pet include having a new home. When you bring your new pet home, it needs time to adjust, and during this period it may get stressed.

This is not a major issue since it will take the new gecko about three to six weeks to get acclimatized and get used to you. If it is the initial period at the new home, let the pet have time on its own and avoid handling it.

If you are keeping the geckos together, it might be the source of stress. Bullying is common as they fight over territory. Avoid putting two males in the same cage due to territorial problems.

You might also experience bullying with females if they are larger or older than the one getting bullied. Avoid placing small and large geckos in the same cage for long.

Feed your pet in a healthy way and ensure that the insects are gut-loaded and dusted at all times. Provide clean and freshwater as well.

When in the tank it is not useful except during feeding when they eating the little crickets hopping around.

When there are loud noises, your gecko becomes more responsive, but it may also result in its getting stressed.

Responsiveness is important in that they are able to associate some sounds with activities, but these should be normal volume sounds. When they are loud noises, there is a high likelihood that the gecko will get stressed.

If you always handle them after there is an intense door bang or loud music, the leopard gecko will associate the loud sound with you. It will develop mistrust, which is unfortunate for a pet owner.

Don’t get surprised when your leopard gecko screams. It could have different meanings and we hope this article sheds a light on them. The basic issue regarding screaming is that some discomfort is causing your gecko to make it.

Avoid the problem by ensuring that the mentioned issues are checked when dealing with the pet. Note that loud noises could also cause stress, which in turn causes the gecko to scream.