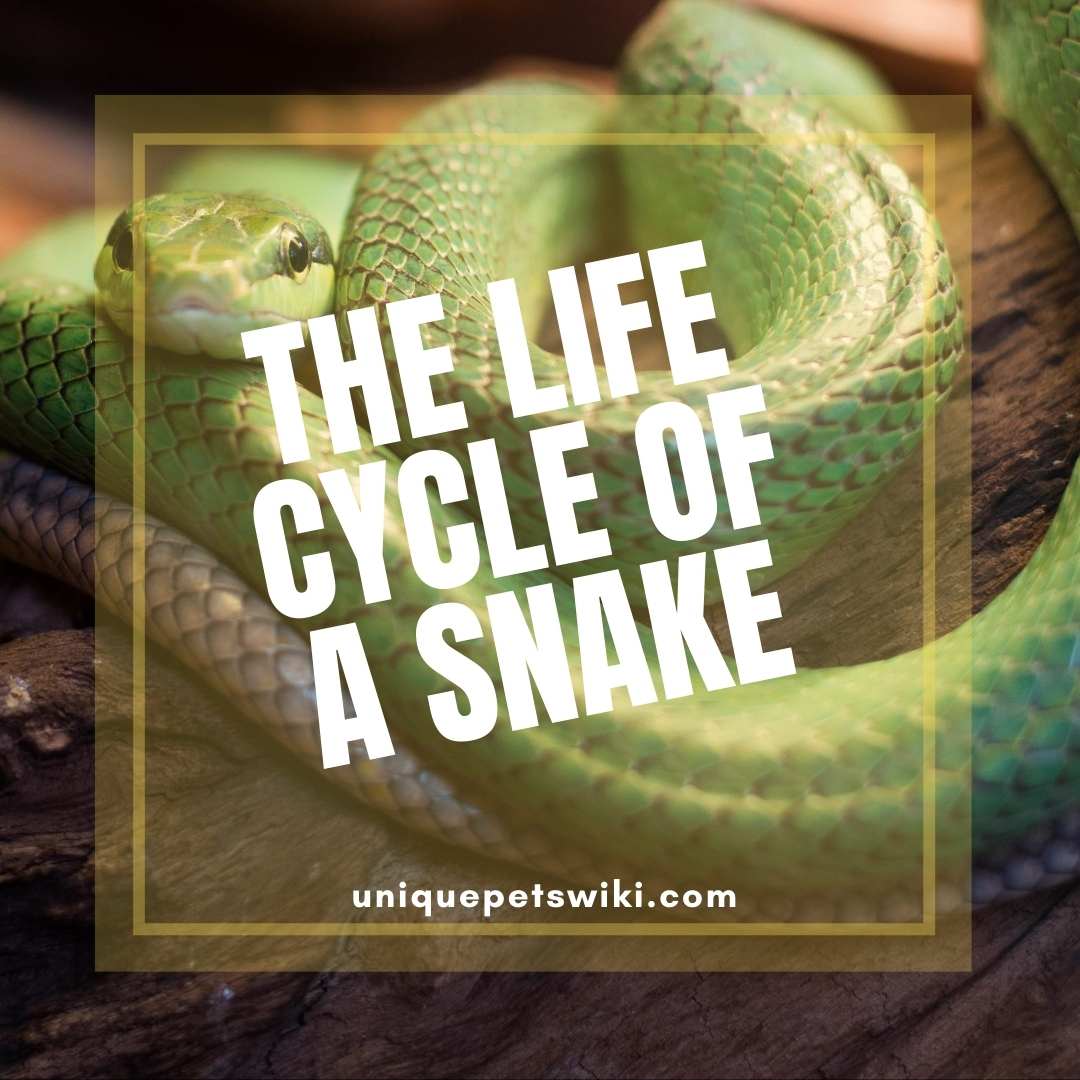 What is the life cycle of a snake? Learn everything you need to know about the entire life of the different species of snakes.

Snakes are incredible animals expressing mostly unique features in their life. The world records two distinct kinds of snakes, that is, the poisonous and non-poisonous snakes.

There are about four modes of reproduction evident in different snake species for producing offspring. Snakes may differ from each other in a variety of ways, but they also have some things in common.

In this article, you are going to master all that concern the life cycle of a snake.

Life Cycle Of A Snake

Typically, the life cycle of a snake includes four stages: egg, baby snake, juvenile, and adult snake. After reaching adult stage, snakes will mate and either lay eggs or give live births.

Stage One- The Egg

The life of snakes begins after mating, and females are capable of storing the sperms in their body for varying periods depending on the species.

For instance, the coastal taipan stores sperm in her body for up to six months. Rattlesnakes can remain with the sperms for even a year.

The majority of snakes lay eggs, but others give birth to live baby snakes.

The egg layer snakes are called oviparous. They mostly bury and leave the eggs in hidden places but others like python remain with the eggs, provide warmth and protect them until they hatch.

The snakes usually lay one clutch of eggs in a year, but some can lay 2-3 clutches like the African house snakes.

Snakes are capable of laying between 1-100 eggs depending on the species and the size of the female.

The eggs are leathery and tend to stick together. They are porous to gases and liquids but maintain much of their liquid content when the conditions are suitable.

Snakelets can emerge from the hatching eggs, or they are born alive.

When it comes to giving birth to live babies, some snakes retain the egg in the body after fertilization, carry the pregnancy and eventually give birth.

On the other hand, snakes like boa constrictor among other species form a zygote directly after fertilization and when the pregnancy stage is over, produces a neonate. Using these few examples, it is clear that snakes exhibit different ways of giving rise to their young ones.

Baby snakes emerging from hatching eggs are Snakelets while the newborn snakes are neonates.

Note, all snakes are born with an egg tooth that they use to break the shell or the membrane when finding their way out. The egg tooth wears out immediately after the birth process is complete. Ovoviviparous snakes retain the case in the body after giving birth.

Moulting behavior in snakes begins at stage two. Young snakes molt nearly four times within a year to remove the old skin and any parasites attaching to the surface.

They do this by rubbing their body against a hard object that they encounter like a stump.  Most of the baby snakes are born independent, and they can walk and start searching for food on the first day of life.

However, some snakes like African rock pythons look after their born babies for some time until they can depend on their own.

Young snakes feed on small lizards, mice, rats and other small animals. In the venomous snake species, the baby snakes are born with active venom glands and fangs.

Snakes have a unique Jacobson’s organs, that aid in tasting and smelling particles in the air. The young snakes extend their tongue right away after birth, to feel the external environment.

A juvenile is a snake older than 6 months old but haven’t reached adult stage yet.

Molting will still occur in this stage, but this time it reduces from four to between 1-2 times throughout the year. Shedding of the old skin enhances growth. Snakes can identify a single place with hard objects which they often visit to remove the skin.

Venomous snakes hunt by using their venom to paralyze the prey. In contrast, non-poisonous snakes are excellent constrictors; and they hunt by constricting the prey to suffocation and swallows them whole.

Adult snakes have distinct and precise colors on their body, unlike the young snakes who sometimes, it might be challenging to distinguish them.

Snakes can remain alive and productive for a long time, even more than 100 years depending on the species.

When they reach the adult stage, they will mate to have babies or eggs.

Do Snakes Need a Mate to Reproduce?

Typically, fertilization has to take place for embryos to develop. The breeding season varies in snakes.

In cold environments, snakes will first go to hibernation, and then mating happens immediately after this stage, when the snakes are active. It ensures that baby snakes are born in the time of the year when the temperatures are favorable, to increase their survivability.

Other snakes like the northern species prefer to mate in the autumn.

Mating practice in snakes is not an uncomplicated activity, and it involves rioting. The male snakes at this time become very aggressive to each other, and they usually fight for a female.

The dominant male is the winner of the battle and has a high chance of attracting the female.

Though, females are the ones to choose which males to mate with, despite the long struggle. She can make the decision even after a couple of days. A single male can mate several female snakes.

Contrary, there are those snakes that do not need a male to reproduce though it is a sporadic case.

The condition is called parthenogenesis or asexual reproduction. Such a situation is evident in some wild copperhead and cottonmouth snake species, and they still produce healthy neonates.

When Do Snakes Become Sexually Mature?

In domestic and some wild animals, you can tell the age of the animals using certain features.

However, this is different when dealing with snakes. You can hardly identify the exact age of a snake, but reptile Vets with experience can do that. Snakes do not stop growing, adults continue to grow throughout their lifetime, but unlike the rapid growth in the young ones, they grow slowly. Males reach their reproductive maturity earlier than females, just like in the majority of the animals.

In females, when they are mature, it means that they can lay eggs or become pregnant.

Attaining the maturity in snakes have direct association with the general body health, nutrition, age, and sometimes body size. Snakes may become mature after several years depending on the species.

For example, black rat snakes can become sexually active after about seven years or even more. Burmese python will mature when it is about 4-5 years old. Majority of the snakes in favorable conditions will attain maturity between 2-3 years.

Mature snakes appear to eat less than the young snakes in many species. Perhaps, baby snakes feed frequently due to their high rate of growth.

Most of the diet in adults is primarily for maintenance and a partial growth. Adult snakes typically hunt large prey to accommodate their ample belly and digestion can take place even after a week.

During the breeding season, the feeding behavior in female snakes can increase or simply decline.

How Long Can a Snake Live?

Various parameters may have a direct relation with how long an animal can live.

Such factors are proper nutrition, good health, environment, genetics, among others. Snakes can live for many years.

There are those species who have a total lifespan of even 100 years.

Captivated snakes live for a long time compared to the wild snakes because they are in a friendly environment away from stress and threats in the outside world.

In case they fall sick, these snakes receive their medication immediately, and this significantly contributes to a long lifespan.

However, snakes in the wild can die early because of predation, climate, and illnesses, among other factors.

Being cold-blooded animals, they lack the physiological capability to fight infections, thus exposing them to diseases.

How long a snake can live will depend on the species. Let’s take a look at the following snakes and their possible lifespan.

There are many species of snakes, and they all have different lifespan. Throughout the snakes’ life, a female snake can produce hundreds of offspring.

What Diseases Can Affect Snakes?

Indeed, there are multiple activities in the incredible life cycle of snakes. Snakes are born or hatched, and they grow, reproduce and die.

These four stages are essential to all living creatures. Also, diseases are not new, all snakes, whether wild or captivated, can become sick.

Illnesses in snakes can reduce their lifespan or even expose them to chronic problems. Snakes can suffer from bacterial, fungal and viral infections.  Below are some examples of diseases that can affect snakes.

Septicemia is the blood poisoning, due to the presence of bacteria such as Proteus hydrophilius in the bloodstream.

The bacteria get into the body through the wounds or snake mites. Septicemia is a fatal disease and can kill snakes within a few days.

Sometimes you may not notice when your pet snake is suffering from septicemia, but regularly, sick animals will express signs like; breathing difficulty, fatigue, small red or purple wounds on the skin.

Treatment of Septicemia is possible through antibiotics in the early stages. Baby snakes are prone to this disease.

Mouth rot is a bacterial infection that occurs due to low immunity in snakes.

The condition allows the bacteria in the mouth to multiply and may cause inflammation. Reduced resistance may be due to poor diet, inappropriate humidity and temperatures or mouth injuries. If not timely treated, this disease can spread to the lungs and digestive system.

The general signs and symptoms of this disease are anorexia, pus and dead tissues from the mouth and nose. Treatment involves the use of antibiotics.

IBD is a severe viral disease that can spread quickly from sick to healthy snakes through particles in the air, direct contact, use of dirty feeders and waterers.

Adult snakes are vulnerable to the disease, but it can also affect the young snakes.

The signs of this disease are persistent regurgitation, poor appetite, unusual skin shedding, and sometimes head tremor may occur. It is challenging to treat IBD.

Understanding the diseases that affect snakes is crucial to help you care for your pet and avoid any conditions that are likely to cause the disease.

Now it is clear about the life cycle of snakes.

It is beneficial to know the life cycle of a snake, especially to responsible snake pet owners.

Having such information at hand will help them to raise their pets appropriately and appreciate the different activities in snakes. Snakes undergo through three stages in their lives, eggs, young ones, adults, with specific changes at each level. Learning about snake life is indeed beautiful; you get to know much about them.