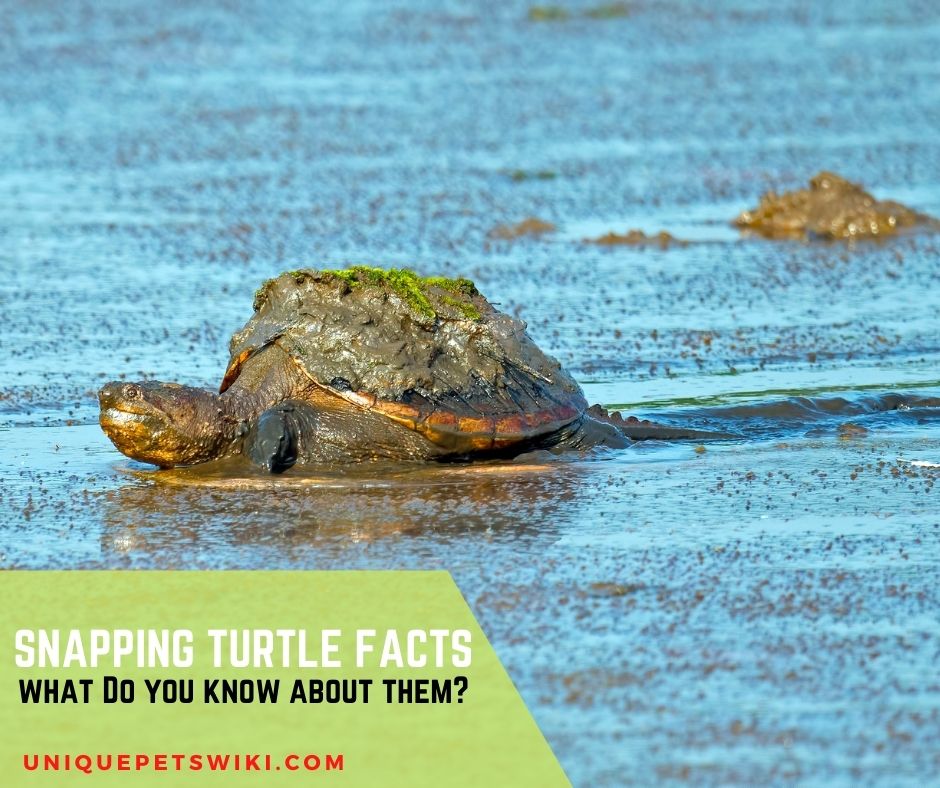 Snapping turtle facts. What myth or misconception have you heard or been made to believe about snapping turtles?

I’ve heard several keepers, especially beginners, believe that since snapping turtles like burrowing in mud in the wild, they should be kept in the mud in captivity. This is not entirely true except you have a naturally existing pond near your house.

In the absence of one, if you should replicate a muddy habitat for your captive snapping turtles, you’re likely to have health problems as a result of not being able to keep the terrarium clean.

In the wild, it’s natural for them to burrow in the mud because every water body is muddy on the bottom. Besides, there’s also automatic filtration to keep the water clean since the water is always flowing.

Hence, they can healthily thrive in mud in the wild but not a necessity in captivity. This is just one of the many misconceptions about snapping turtles that keepers have.

Wrong conceptions or myths can have a negative effect on how you care for and treat your pet snapping turtles.

To dispel these myths and misconceptions, this article will focus on all the facts about snapping turtles you should know.

Your knowledge of these facts will help you to provide optimal care for your pet animals. Keep reading to the end.

Before I got my first pet snapper in 2016, I did intensive research about their care requirements, temperament, and their suitability to be owned as pets.

Acting aggressively is a normal response or behavior every living thing including humans display when they get angry or when something goes wrong. Hence, your snapping turtles are no different.

When you rule out stress factors and what will make them feel threatened, snapping turtles are great animals to own as pets. They have a wide variety of foods that makes feeding them in captivity easy.

They are also one of the easy to care for pet animals with less requirements for attention and handling. What this implies is that, if you’re the busy type with less time to bond with your pet animals, snapping turtles is a good fit for you.

Being ignorant of what your pet animal is and what it needs can make you deprive your animal of what is essential to its health as well as focusing on what may not be beneficial to the animal.

Such ignorance is why keepers will not provide heating and lighting bulbs to their snapping turtles because they believe that since the animals live in the water, they don’t need heat.

In this section, we’ll discuss all the facts about snapping turtles that every keeper should know.

As earlier stated, snapping turtles love to burrow in the muddy part of their pond in the wild. But in captivity, they don’t need to stay in the mud.

Therefore, you don’t need to add mud to their aquarium or make it muddy. They are freshwater animals and providing them clean dechlorinated water with a functioning filtration is the ideal cage set up for them in captivity.

Refer to this article for more information about snapping turtles’ captive habitat.

They Have A Calm Disposition And Make Good Pets

Without a doubt snapping turtles can be aggressive. But they usually don’t become aggressive for no reason. It is a nature that is triggered each time they feel threatened or stressed.

In the wild, aggressiveness is their major way of defending themselves since they don’t have a larger shell that they can pull themselves into when they’re faced with a threat.

They also tend to act aggressively in the wild when hunting for food. Snapping turtles are territorial animals.

In the wild, each individual snapping turtle occupies a particular section of a pond or stream while another may occupy another section far away from each other.

Hence, when hunting for food if both turtles encounter each other they’re likely to have a conflict of interest and will fight.

Snapping turtles are a species of reptiles that are found only in North America. The regions they inhabit include the Rocky Mountains to the eastern part of Florida and Nova Scotia in Canada down to northern Mexico and central Texas.

Because of their unique geographic location, they are given the name ‘only found in North America’. There are only two subspecies that make up the snapping turtle species. They are the common snapping turtle and the alligator snapping turtle.

A snapping turtle has a shell that covers its back just like all turtles. The shell (carapace) typically measures between 8 inches to about 18 ½ inches long in adults.

While other turtles and tortoises have large plastrons that can cover their entire body, snapping turtles have smaller plastrons that leave a large part of their body exposed.

Because of this, they cannot pull their entire body (head and legs) into their shells for protection against predators as other species of turtles can. This is one reason they tend to be aggressive when threatened.

Snapping Turtles Are Hunted For Meat

The activity of man such as hunting has been the major threat to the survival of these species of turtles in the wild.

In North America, they are widely hunted for their meat and this has affected the total population there are in the wild. For this reason, they’re listed as endangered species.

Why They Are Called Snapping Turtles

Their name ‘snapping turtles’ isn’t a coincidence but intentionally given to them because of their ability to snap at anything that crosses their path. Anything, be it a prey, predator, or even human.

Snapping turtles do not have teeth but they have a powerfully strong and bony beak like the hooked beak of a bird and a strong jaw that enables them to snap at food and predators.

Depending on their size, snapping turtles can inflict serious injuries from their bites. Adult snapping turtles have a bite force of 45 to 150 pounds per square inch. Therefore, it’s not advisable you hand feed them. Always use a long stick or tongs to suspend food to them.

Snapping turtles have a long lifespan of about 30 years in the wild. With optimal care in captivity, they’ll live longer than that up to 50 years.

Snapping Turtles Have A Wide Variety Of Food

Snapping turtles are omnivores. This means that they eat both plants and animals in the wild. This also means that they have a wide variety of foods to feed on in captivity.

They Have An Amazing Hunting Habit In The Wild

If you observe a wild snapping turtle closely, you would notice that except it’s not hunting, it’ll leave its mouth wide open and remain calm in one position.

Snapping turtles have a small bright pinkish growth that resembles a wiggling worm on the end of their tongue. While they leave their mouth wide open, the worm-like growth will be moving like a wiggling worm to entice prey to believe it’s a worm.

Once the prey gets into its mouth to eat what looks like a worm, they will grab (snap) at the prey with their strong jaws.

This worm-like pinkish growth is only present in alligator snapping turtles. The common snapping turtle subspecies (Chelydra serpentina), do not have this feature. But both species hunt by ambush in the wild.

How Predators Attack Them In The Wild

It’s a pity how snapping turtles can be prey to other animals that seem stronger and powerful than them. It’s not just a sight to watch, but you’ll feel bad for these animals in the wild.

Since they don’t have large plastrons that they can pull themselves into when faced with threats, they’ll use their legs and try to maintain balance so that the predator will not flip them to their back.

If the predator is stronger and powerful enough to successfully flip them over to their back, they become defenseless.

At this point, it’ll be easy for the predator to strike a powerful bite to their flesh. Some animals that often prey on them in the wild are otter, alligators, and raccoons.

They Are Found Both In Freshwater And Salt Water Bodies

Snapping turtles inhabit both freshwater and saltwater lakes, creeks, ponds, rivers, and canals. Because of this, they can feed on saltwater fishes as well as freshwater fishes.

Snapping turtles are solitary in nature. This means that they live alone. Although many other turtles can be found in one habitat, their social interaction between themselves is limited because of aggressive tendencies, especially between the males.

The only period they interact with one another is during mating/breeding season. In a nutshell, the total number of snapping turtles you can find living in the same habitat (water body) is dependent on the availability of food in that habitat.

They Have Flexible Necks As In Snakes

Snapping turtles have a flexibly long neck that can stretch towards any direction and to a considerable length of about 19 inches.

That is why they’re given the scientific name ‘Chelydra serpentina’ which means that they have a neck that moves freely like that of a snake.

Snapping Turtles Are Not Diggers

Snapping turtles aren’t diggers like land-based tortoises. For one reason, they are aquatic and do not need to dig.

Secondly, they have webbed feet which makes digging cumbersome for them. Only the females are known to dig when preparing a nest/burrow for their eggs.

Snapping Turtles Can Lay Large Clutch Of Eggs In One Litter

In a single birth, the common snapping turtles can lay between 20 – 40 clutches of eggs in a concave nest prepared by the female.

Snapping turtles are just one of the turtle species that can withstand extreme cold weather conditions. Both in the wild and captivity, they do not need sunbathing.

However, if you choose to sunbathe yours once in a while like once a month, that wouldn’t cause any harm.

Keep in mind that the fact that snapping turtles can withstand cold temperatures doesn’t mean you shouldn’t provide them a functioning heat lamp. Keeping the aquarium cold all year will lead to many problems including death.

In a nutshell, the average cage temperature range for captive snapping turtles is 78⁰ F – 80⁰ F for hatchlings and 75⁰ F – 85⁰ F for adults.

They Are Nocturnal Species

Some breeders believe that snapping turtles are nocturnal animals. Perhaps they are in the wild since they mostly spend their time underwater lying on the bottom and waiting for prey so they can attack. But in captivity, they’re mostly found active during the day.

Snapping turtles are one of the hardiest species you can find in the turtle family. They are calm, easy to feed, and easy to care for. They do not require much attention and do not like handling.

They make great pets to any class of herpetologists including beginners. As discussed in this article, snapping turtles aren’t as aggressive as they’re made to look. They only behave aggressively when faced with predators or when stressed.

Therefore, having understood this, it’ll be inappropriate to trigger your pet snapper to aggression via poor husbandry.

While it is easy to care for these animals as pets, ensure that you read about their complete care guide if you haven’t to provide better care to your animal.