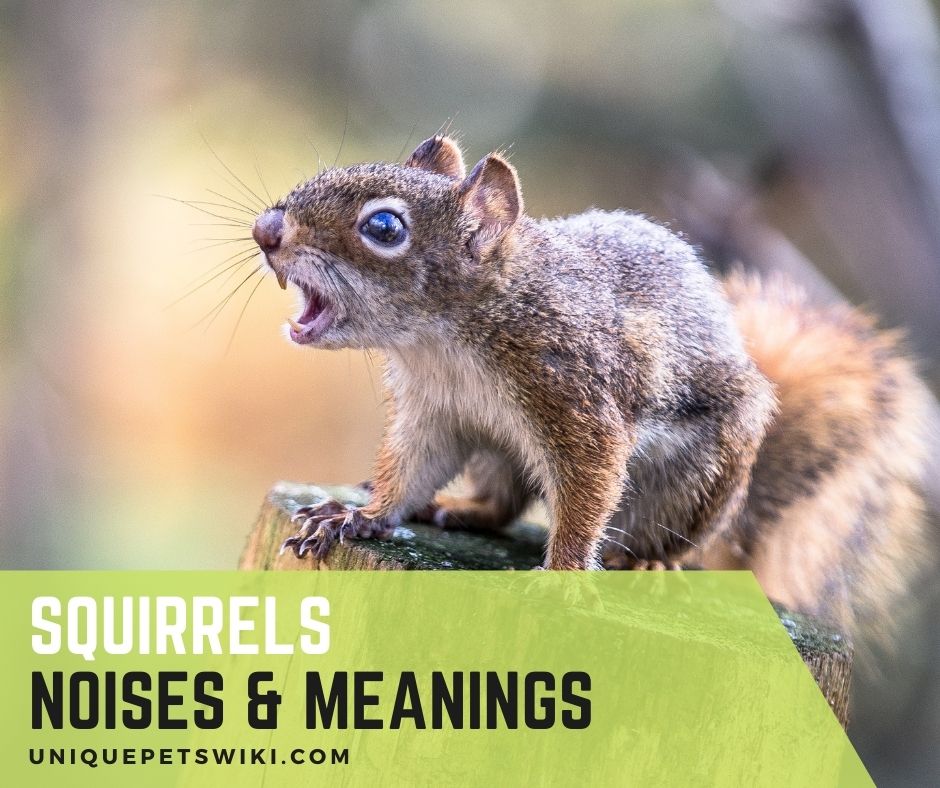 Animals make sounds for various reasons, including attracting a mate, keeping off strangers from their territories, etc.

You might want to know what sounds squirrels make and also squirrel noises meaning.

Understanding animals’ noises is paramount, especially when handling them, and squirrels are no exception.

Further in the article, you will learn the different sounds that squirrels make and their meaning, and other relevant information.

What Sounds Do Squirrels Make?

We hear animals making sounds, especially when near a forest, but sometimes the sound is very new, and we don’t know the animals we are listening to. Talking of squirrels, these lovely critters also have a variety of sounds.

Those are the sounds squirrels make, and each sound communicates a specific message. It’s not surprising to hear that squirrels can communicate with each other. This is a typical behavior even among other animals’ species.

The intensity of the noise that squirrels make is different from one species to another. While some species appear to be more vocal, others are on average. That means that a specific squirrel species has its own identifiable set of sounds.

Now that we have a list of sounds made by squirrels, you might also want to know what these sounds mean, as each sound has a different meaning.

But before that, always remember that the type and volume of sound squirrels make primarily depends on gender, age, and circumstance. Having that in mind, now let’s revisit each sound and learn its meaning.

It’s clear now that squirrels make more than two noises, and each sound has a different meaning.

So, what are these meanings? Check them in the table below. We will also discuss them later in detail.

As we all know, squirrels are territorial animals and will not withstand any stranger approaching their territory.

This can be human beings, animals, or other squirrels.

That’s how protective they can be, and you will hear them Rattling or screeching.

Don’t stop there yet; continue reading and dig deep into the meaning of all the sounds you hear squirrels making.

Muk-muk sound is common among young squirrels and also adults when mating.

We barely hear baby squirrels’ noises because their tones tend to be soft and subtle.

That way, the babies rarely attract the attention of predators.

Young squirrels make the muk-muk sound when hungry, thus alerting the mother that they need food. Muk-muk is a soft and puffy sound. Such sound is also common when squirrels are mating.

In the process, the male makes a muk-muk sound to reassure the female that he is not a threat. Muk-muk is like a stifled sneeze: phffft phffft.

Many wild animals will not tolerate any intruder into their territory, and this also applies to squirrels. In case a stranger oversteps into the squirrel’s boundary, these animals must sound a warning.

A squirrel will also respond with a rattling sound when an intruder squirrel is present in its boundary. These animals have middens. These are places located within the territory where squirrels store food, and they usually defend them.

They warn the potential intruders to the middens with rattles. Rattles sound largely advertises the defending squirrel’s presence.

The squirrel’s crying noise tends to communicate several different messages. For instance, if a squirrel spots a predator, it makes the crying noise and alerts others.

Moreover, these rodents also utter a crying sound in case of any injuries. You will also hear the crying sound when squirrels fight over food.

Furthermore, baby squirrels also tend to utter a low cry in two circumstances. The first one is when they feel startled and are calling out for their mother. The noise is pretty low such that the mother can only perceive it when nearby.

Baby squirrels cry when hungry. This is how they call out their mother to come and feed them.

Squirrels emit screeching sounds to defend their territories. Screeches are different from rattles as the former one imparts a threat to the intruding squirrel wanting it to leave the area.

The squirrel is trying to communicate to the intruder that it sees it. In return, the intruder will know that it has lost its advantage and there is no alternative except to disappear.

Squirrels produce a high-pitched chirp sound when they communicate with each other. It happens mostly among the baby squirrels calling out parents in case of danger.

However, this is common noise among squirrels when they spot an aerial predator, such as hawks, owls, or eagles. You can hardly locate this sound from squirrels; thus, it’s a safe way for these animals to sound the alarm.

In such a situation, squirrels stay hiding from a predator that can follow them, and they appear very troubled. You can see them plastering against objects like trees and remain still.

Kukking is a sharp bark of alarm, and it occurs in series.  A squirrel may produce this sound directing it to fellow squirrels or predators.

A squirrel, sensing danger or the presence of a predator, signals out the sound to others, informing them of a predator’s presence nearby. Here, the audience is fellow squirrels.

Kuk sound plays double tasks. Ideally, a squirrel Kukking means it’s seeing a predator and is warning it from coming closer. Hence, predators are the second audience to kuk noise.

This sound has a short duration and a broad frequency when subjected to a spectrogram. A squirrel may or may not see its Kukking counterpart, but it can quickly locate the source of the sound.

When Kukking, squirrels orient themselves towards the threat; hence, their counterparts will know where the danger is.

For instance, a predator who realizes squirrels have spotted it will not delay at the area but leave. Quaa sound explains that squirrels can still see the predator, although it might be moving away.

Therefore, quaa follows after a kuk sound, and it has a lower intensity. It is basically a kuk that lasts for more than 0.15 seconds.

Seet sounds tend to have a high frequency and low amplitude. On the other hand, barks are simply loud alarm calls and tend to have a broad overtone. Seet-barks is a sound that is intermediate between seet and barks.

These sounds are common with North American red squirrels, and they are emitted to mean something. For example, squirrels emit seet and seet-barks in response to aerial predators like ravens.

Barks respond to animals like dogs and humans, which are terrestrial predators. Seet and seet-barks are used in combination, where the seet starts and then a loud bark.

Buzzes carry low amplitude and are common among Eastern grey squirrels. Buzzes tend to be inaudible, but you can hear them when you’re not far from squirrels making the noise.

Buzz sound has low intensity, and it resembles a quick sound uttered through the nostrils. These sounds also warn any predator approaching a squirrel’s territory.

It’s not new to us that squirrels have several sounds, and the type and intensity of the noise vary depending on species.

Squirrel noises meaning is also different depending on their age, circumstance, and gender.

These creatures’ vocal sounds help them communicate with each other or portray a message to the potential predators.

The response towards the presence of predators alerts other squirrels there is a threat.

Squirrels are defenseless against a couple of predators, including dogs, ravens, humans, hawks, etc. Vocalizations help them to teem up with their eaters.

The range of vocal sounds is important to these cute rodents and is an essential mechanism to help them survive for many years in the wild.