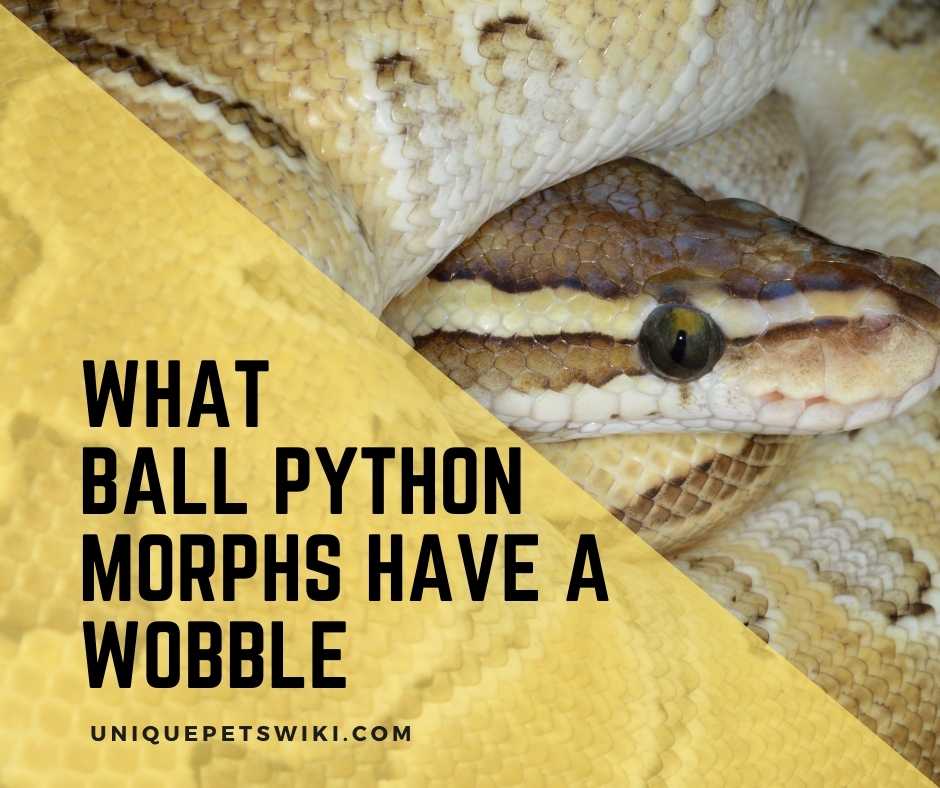 Do you have a ball python that twists its head sideways or even upside down, and you wonder what it is? You’re not alone.

Many pet ball python owners have one or two snakes with this head twisting too. It is given different names from wobble, corkscrewing, swaying to head shaking, or head twisting.

It’s a painful sight to see your pet snake struggle to maintain head balance like other snakes. They struggle to catch their prey at first strike or attempt. They even struggle to move in a coordinated direction with their heads kept straight.

Some pet owners who aren’t familiar with the wobble condition get worried sick about what could be the problem with their snakes.

What exactly is a wobble? What are the causes? Is it something you should worry about? What can you do to help your pet ball python with a wobble? These and many more questions will be dealt with in this article.

In the end, you should have a better understanding of your pet snake and how best to care for it. Follow me to the end.

What Is A Wobble In Ball Pythons?

A wobble in ball pythons is a genetic disorder or mental malfunction that affects the brain, nerves, muscles, and the snake’s central nervous system.

Because of this disorder, the affected snake tends to wobble its head side to side and sometimes flip it backward or upside down.

What led to the wobble condition is the deliberate or artificial breeding selection where breeders crossbreed two or more different genes to produce a new snake called morph.

The wobble condition is more obvious when the snake is excited or is stressed. Snakes get more excited when they scent their prey and are ready to strike.

Because of this wobble condition, affected snakes often miss striking at their prey food at the first attempt.

For ball pythons, the wobble condition is predominant with the spider morph. It is also severe in morphs with the Spider gene combo in it.

Now that you know what a wobble is in ball pythons let’s find out what ball python morphs have a wobble and what you can do as a keeper.

What Ball Python Morphs Have A Wobble?

Many ball python morphs have wobble. The severity of the wobble syndrome varies among the affected morphs.

The ball python morph with the most severe case of wobble is the Spider ball python.

As noted by some breeders, the head wobble tends to get worse with age. That is, the older the ball python is, the more severe the wobble syndrome.

Aside from the fact that head wobble is a neurological defect linked with the Spider gene of ball pythons, the symptom can also be triggered by heat/cold shock. It can also be caused by exposure to some chemicals or diseases.

For this kind of wobbling, the snake can be remedied because it’s not a genetic defect. You can remedy this by evaluating your husbandry and correcting any fault in your husbandry.

Ball python morphs with a low case of wobble or even those without wobble tend to exhibit symptoms when they’re stressed.

However, if your snake still shows symptoms of wobble after you’ve returned all enclosure requirements to normal for about a week, then you need to visit a vet.

If your snake doesn’t have the spider gene or any other gene that could cause wobble and is not exposed to heat shock and toxic substances, it’s likely your snake is having IBD.

What Other Pythons Have Wobble?

When it comes to wobble, ball pythons seem to top the list. Ball pythons have the highest number of morphs with wobble. That can be due to the constant deliberate crossbreeding of genes by breeders to create new designer morphs for profit.

Notwithstanding, other species of snakes also have wobble syndrome. They include carpet python morphs and corn snakes. Although some breeders have reported seeing their corn snakes wobble, it has nothing to do with a neurological disorder.

For corn snakes, it’s a healthy behavior they display when they scent their prey. The males also do this during the breeding season.

Bonus: What Does It Mean When A Snake Has A Wobble?

Without a doubt, every ball python morph with wobble is a distinctively beautiful snake on its own. Unfortunately, the disorder in the genetic mutation results in them having a head wobble which can be very frustrating to both the snake and the owner.

Imagine your pet wanting to strike at his prey food but missed it and bite your hand instead. The head wobble affects the snakes’ motor skills. Ball pythons with wobble can’t raise their heads like other snakes without it trembling, swaying, or twisting.

Because of this, ball pythons often have trouble coordinating themselves when they’re moving around. Also, they find it difficult to aim accurately when striking their prey because of head wobble syndrome.

This wobble differs in severity depending on individual snakes and their component genes. According to the Journal of Exotic Pet Medicine, almost every ball python morph with the Spider gene tends to have a severe case of wobble.

The International Herpetological Society considers banning the Spider morph ball python as of 2017 because of that.

Is The Head Wobble A Thing To Be Worried About?

In simple terms, as long as your pet ball python eats, poops, and shed properly, there’s no need to worry about its wobble condition.

Although no research has been carried out to ascertain if it hurts the affected snakes, the sight of seeing your snake struggling is frustrating.

Since they struggle to maintain head balance or act in a coordinated manner like other snakes, a good keeper is bound to show empathy or concern for the snake.

But talking of what to do to help the snake, head wobble cannot be remedied. There’s little to nothing you can do to correct it.

If you’re a breeder, you should study the genetic makeup of the genes you intend to breed to avoid creating a morph with the head wobble.

But aside from that, there are a few tips you can apply to ensure that your affected ball python isn’t going through too much stress or frustration. Some of the tips are:

As of date, the head wobble in ball pythons is still a highly controversial topic of discussion. Aside from the fact that it is a neurological disorder common among the Spider morph, there hasn’t been any scientific research to tell what happens.

Thus, while some ball pythons with the Spider gene have a severe wobble, others experience mild wobble.

If it is a natural occurrence resulting from a genetic disorder, there’s no point to worry. But if it’s a result of external factors, then urgent care should be taken.