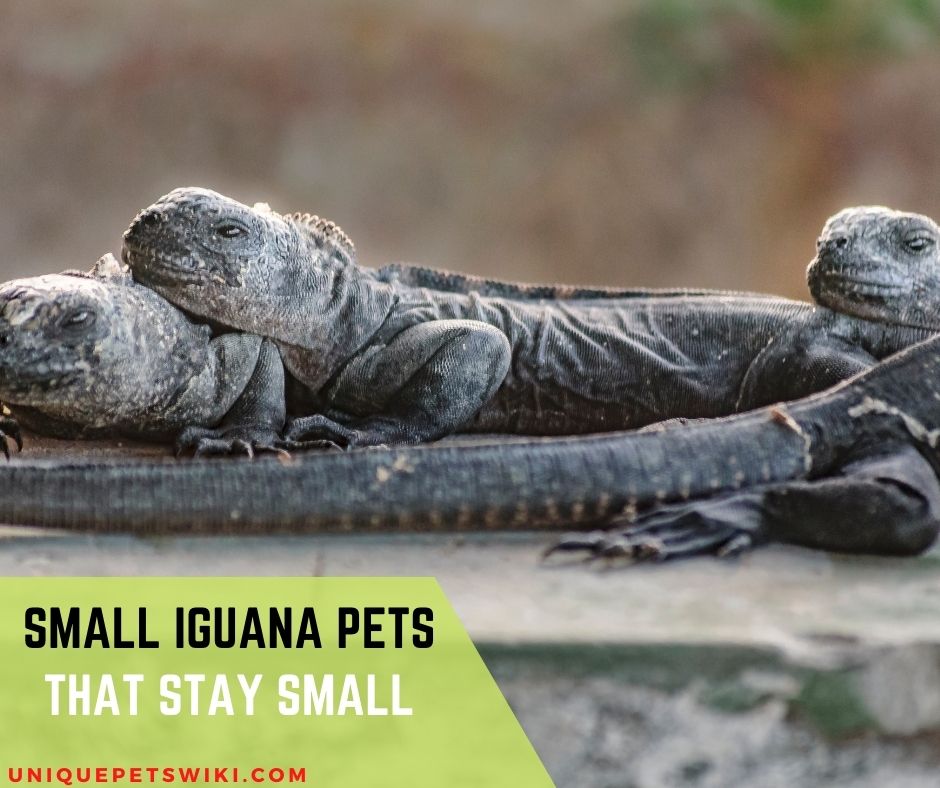 Top small iguana pets. what are they? Iguanas, for instance, is a reptile with over 45 species, some of which are taken in as pets.

Many people think that iguanas are big, the truth is, iguana class has big species and small species.

We created a poll in 02/2021 to ask members in Snakes, Lizards, & Amphibians: “why would you prefer a small iguana rather than a big one?” Most of them are looking for small iguana types for pets.

They want small iguanas because they tend to make little, adorable, and warm pets. Their sizes matter to people who like to keep small pets or limited space.

Stay glued to us as we briefly delve into small Iguana types that remain small for pets.

What Are Small Iguana Types?

Iguana, in general, is a big lizard. There are only four types of iguanas that are small in size. They are:

Note: Black spiny-tailed Iguana and green Iguana can grow big depending on the breed you go for. Other times, you will find that some of these species mentioned also stay small.

This species of iguana has a speedy running ability, a world record of 20 miles per hour.

Yucatan Spiny-tailed iguana is a small species of Spiny-tailed lizards. Its origins in Central America or Mexico.

This is the most clearly colored iguana breed as it has a heavily armored grey tail, white and black chest, blue head, and a red lower back.

They have long nails that are covered with keeled scales. These keels serve as a form of protection against any threat.

They tend to whip the perceived threat with their long nails.

Yucatan Spiny-tailed iguanas can grow up to 10 inches in length. Their regular size is about 5 to 8 inches. The males are usually bigger than the females, such that the former is about 10 inches and the latter is usually 5 to 7 inches long.

This species of iguanas is the smallest iguana on the Earth. They are commonly found in the hot, dry area of Central America and Mexico.

Another fun fact about Yucatan Spiny-tailed iguana is that they are excellent climbers that run as fast as nothing you’ve ever seen.

Developing trust with this iguana species might take a while, so Yucatan Spiny-tailed iguana is best for experienced iguana keepers.

The appeal of Yucatan Spiny-tailed iguana is just how petite and cool they are. No matter their age, they can perfectly fit into your palms. Sadly, they are an endangered species because of hunting and how easily it trams on them [?].

They are therefore relatively expensive to get. Due to these and other factors, it can be as costly as $180 and $230

Desert Iguana has camouflage attributes to match the natural desert that makes them unique.

The way this species looks makes it one of the most beautiful of the entire iguanas. Depending on the time of the day, the desert iguana can change their color. This makes them so attractive.

Desert iguana turns grey when the sun begins to rise and warm white when it is full sunrise. They do this to protect themselves from the hot weather conditions.

Note that you must be careful when handling baby desert iguana species or overheated babies because they can bite.

For a single desert Iguana, you might have to pay between $50 and $80. The price doesn’t include the monthly costs for keeping an iguana.

A healthy spiny-tailed Iguana is an iridescent green in color. But as they grow older, their skin color changes to either striped or blotchy blue, green, grey, or simply multi-colored. Their eyes color also changes as they mature.

Black Spiny-tailed Iguana diet and environment majorly determine the color of their skin.

The Black Spiny-tailed Iguana usually grows bigger than the Yucatan species, up to 3 feet different. Some of you might ask why do we add it into the small iguana types.

The answer is, you basically can control their size by diet. That is how we call controlled-size pets. Many pet owners don’t like to control their pet’s size. But because of the limitation of their room, house, garden. They must do that.

I (William Nathan) personally always like to have my pets the best diet. I allow them to eat as much as they want and grow up to their full size.

They eat silkworms, Zoophobia, Tomato worms, crickets, and others like them.

You can get a Black Spiny-tailed Iguana for about $150 and $200 at any popular online pet lizard stores.

Green Iguana is the most popular and familiar kind of Iguana species in the world.

This beautiful lizard originates from South and North America, Tropical and Subtropical regions.

The appearance of this cute little reptile pet is mostly affected by its origins and its habitats. Green Iguanas have a long tail that’s up to thrice its body length, enlarged scales below the eardrums, a prominent dewlap under its chin.

The males usually have long spines running down their backs.

The size for a normal Green Iguana is usually around 7 feet and 20 pounds. They are largely green in color, but they bear stripes and blotches of other colors like white, blue, orange, black.

Green Iguanas are primarily herbivorous like most other Iguanas. They tend to spend a lot of time relishing in their natural habitat.

They also swim well and do not hesitate to run from predators if need be. When they feel threatened, these creatures drop their tails to escape from a predator.

According to Reptile Magazine, about one million Green Iguanas are brought into the U.S yearly. This shows just how adaptable, friendly, and affordable they can be.

Are All Small Iguana Types Friendly with Kids?

Trained Iguanas are perfect for families with children. Iguanas get along with other animals, but first, they must have adapted to the environment. They love social reptiles if they are raised correctly.

Can You Keep All Small Iguana Types as Pets?

While Iguanas are wonderful and snuggly pets, not all these creatures can serve as pets.

Green iguanas especially are known to take a lot of space while growing. So you must imagine, they like to have their kingdoms to themselves.

Just recently, the state of Florida made a move to ban a couple of reptiles, and unfortunately, the green iguana fell into the category as well.

If you are a sucker for reptiles, small iguanas make the best pets, and it is not difficult to see why. The exotic species of iguanas highlighted in this review do good reading for prospective iguana owners.