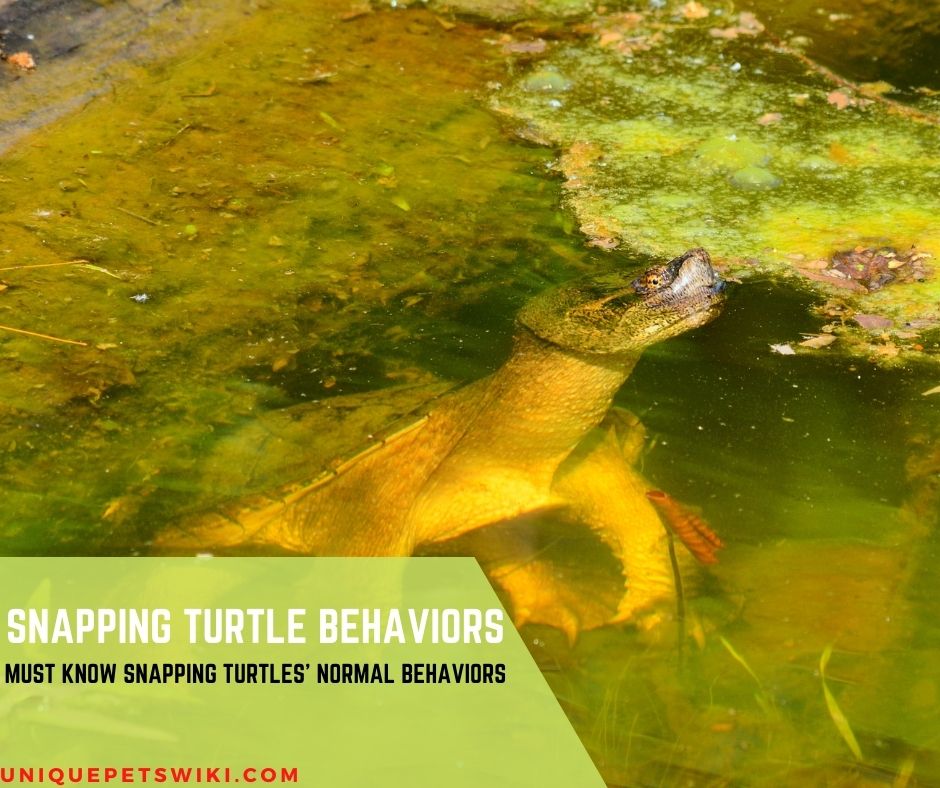 Before this time, you have read several articles about snapping turtles and the fact that they behave aggressively. This has prompted your curiosity to know all snapping turtle behaviors so you can differentiate between normal and abnormal behaviors.

Your knowledge of snapping turtle behaviors will not only make you a good keeper to your pet but will also give you an edge in your husbandry and help you prevent possible bites.

Snapping turtles behave differently in different environments. When they are in the water, they are so calm, docile, and not aggressive except when hunting. But when these animals are on land (removed from the water), they act viciously.

On land, they see everything as threats and will act aggressively in self-defense. Why they act this viciously on land is because they’re nearly defenseless on land since they don’t have a large carapace and plastron that can cover their entire body.

From the foregoing, it’s normal for them to act aggressively a bit to keep themselves safe. But humans see them as angry monsters.

In this article, we’ll explore all normal and abnormal snapping turtle behaviors that you should know and how to relate with your pet snapper for the best keeper-pet relationship. Keep reading.

How To Tell If Your Snapping Turtle Is Happy

As ironic as this may sound, snapping turtles can be happy and can be sad or angry.

On this note, it‘s important that you understand the meaning of some of its behaviors and also know which behavior is normal and which is abnormal.

That said, for you to know that your pet snapping turtle is happy, these are the behaviors you’ll likely see in your pet:

Exploring The Bottom Of The Tank

A happy snapping turtle will often like to explore the bottom of its tank. This behavior is similar to their burrowing nature in the wild.

In the wild, snapping turtles like to burrow in the muddy bottom of the stream or pond with their heads raised up exposing their nostrils and eyes.

This burrowing behavior is also a method used most of the time to ambush prey. Hence, by instinct, they like to explore the bottom of their pond in captivity.

The snapping turtle is one species of aquatic turtles that eat voraciously. They are omnivores which means that they can eat both plant and animal matter. And by extension, they have a wide variety of foods to feed on.

In situations where there’s a limited supply of animal foods for them in the wild, they can survive on plant or vegetable matter.

Therefore, one sign that your snapping turtle is happy is having a high appetite for food and eating at a normal pace.

Any attempt by your snapping turtle to climb out of its tank is an indication that something is wrong with your husbandry.

It can be with the water, temperature, or humidity level. But if everything is at the optimal level, a happy snapping turtle will remain in its aquarium and will not attempt to escape or climb out.

09 Snapping Turtle Behaviors: Which Is Normal Or Abnormal?

This section deals with all snapping turtles’ normal behaviors that you should know as a keeper. They include:

Most aquatic animals such as fish extract oxygen from their watery environment through a specialized organ called gills or directly through the skin. Some other types of aquatic animals will have to come to the surface of the water to breathe in oxygen via their lungs.

The snapping turtles along with other turtles are known to have multiple ways through which they extract oxygen from their watery environment into their lungs.

One of the ways is coming to the surface of the water to breathe before submerging themselves back into the bottom of the water.

One other way snapping turtles breathe is by passing water across specialized membranes in their mouth. This process is called ‘buccopharyngeal pumping’ or simply put, ‘gas exchange’.

Another remarkable way snapping turtles breathe is through their cloaca. The cloaca is a specialized opening in their body used for excretion and reproduction.

In this cloaca, there are some specialized cells called ‘bursae’ that are capable of extracting oxygen from the water. Through these bursae cells, oxygen is absorbed into the bloodstream.

However, breathing through the cloaca and buccopharyngeal pumping only accounts for about 30% of snapping turtles’ oxygen consumption. This is to imply that snapping turtles breathe more with their lungs.

Therefore, in captivity, you may notice your snapping turtle breathing slowly with its lungs. It’s normal.

Snapping turtles got their name because of their nature to snap at food and any other thing that crosses their path. Why they snap or bite humans is because they are scared and at that moment they see the human as a threat.

In captivity, if you hand feed these animals, they will think that your hand is also part of the food and will try to eat your hand.

Climb Out Of The Tank When Temperature Increases

Climbing out of the tank to some extent is not normal behavior. This is because if all care requirements are optimal, your snapping turtle will remain calm in the tank without wanting to climb out.

Any attempt to climb out of the tank is an indication that something is wrong with the setup. This can be that the water is infested with bacteria or that the temperature is too high and it’s discomforting the animal.

Whatever is the reason, keep in mind that an attempt to climb out of the tank is something you should pay close attention to. Evaluate your husbandry to ascertain where a fault is and address it immediately.

As explained earlier, snapping turtles are hunters in the wild. Therefore, they would by instinct love to go after any moving thing that looks like food in their tank. Especially when they are hungry.

Besides hunting, snapping turtles like to explore. This is why it’s important that you provide them some accessories in the tank to explore with. Keeping your pet snapping turtle in an empty tank with only water will cause stress to the animal.

There wouldn’t be any place to hide, burrow, or anything to feed the eyes and curiosity. That will be a boring aquarium.

Snapping turtles are good eaters and never in their history picky. Hence, your snapping turtle should love to eat.

There’s no social interaction between individuals of the same species. Except between the males and females during the breeding season.

Social interaction between snapping turtles and other species of animals is either to prey on them for food or a predator they try to stay away from.

As mentioned earlier, snapping turtles are naturally shy animals. They behave differently when in the water and when taken out of the water.

When taken out of water in captivity, they feel scared and insecure and may try to defend themselves with a bite (snap). Hence, they don’t like to be handled.

Why many people see them as vicious animals is because of trying to handle them, and handling them the wrong way at that.

Snapping turtles do not sunbathe. They only occasionally emerge to the surface of the water where the sun has warmed to bask.

From there, the rays of the sun can filter through the water to their shell. This means that in captivity, you’ll not see your snapping turtle sunbathe.

Despite being aquatic, snapping turtles are not good swimmers. But when hunting, they can move fast so that they can snap at the prey from the right angle.

In the wild, snapping turtles ambush and kill other turtles by decapitation (beheading). Especially smaller turtles. This behavior is linked to their territorial nature towards other turtles. It was also observed during food scarcity.

It’s no secret that snapping turtles have gained popularity as one of the most common pet turtles. They are docile and easy to care for in captivity. They do not require much attention as they don’t like to be handled.

That notwithstanding, they can be very pugnacious when brought out of water or when handled. This is one reason they will bite because they feel insecure and scared.

On this note as a beginner or experienced keeper, it’s important that you understand the normal behaviors of your pet snapping turtle and the abnormal behaviors.

It’s also important that you know what these behaviors mean and why they exhibit them. This will not only make your care seamlessly easy but will also make you a good keeper.