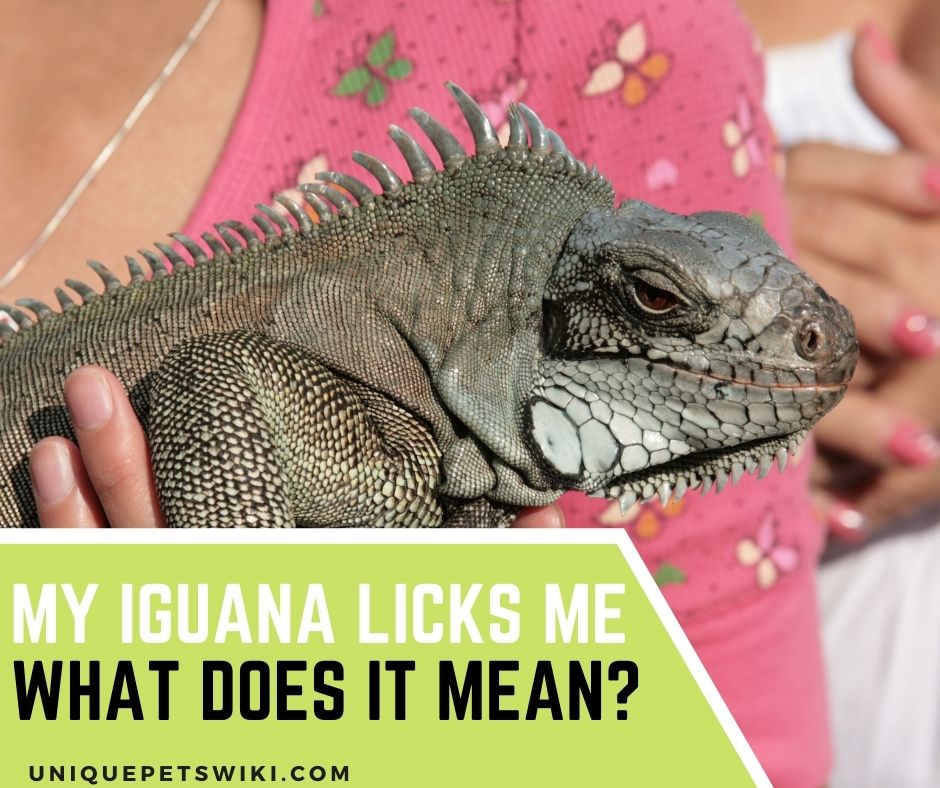 Iguanas love to lick their owners, and many people take this as an animal kiss or sign of affection. Some iguanas are very communal with their tongue making them fond of licking people.

But there are those iguanas that will avoid licking you as much as they can, or they do it less often. Whichever the case, most people, especially first-time owners, are left wondering, “what does it mean when your iguana licks you?”

Your pet licking you could be because of a combination of reasons. Read on to find out what an iguana means by licking you and if these lizards can lick someone else who is not their owner.

How Does an Iguana Show Its Emotion?

I hear people saying that they pity animals since they can’t speak up about their moods and feelings. Indeed, it’s true that waiting for an animal to speak is close to opening a hen’s mouth, expecting to see its teeth.

However, just because they cannot speak doesn’t mean animals can’t express how they feel, and iguanas are no exception.

They communicate to people in the language they understand best, and this can be through body postures and movements, e.g., bobbing and strutting. For instance, an iguana can compliment you by closing one eye and leaving the other open.

If an iguana is hanging loosely, it means it is relaxed. if its dewlap is extended, it means, it is aggressive towards you.

An unhappy iguana is likely to wag its tail. These animals might also hiss on you to give a warning. Twitching head bobs means, Iguana is aggressive and you should not touch him/her, leave him/her alone. Cutting a long story short, iguanas display lots of different communication behaviors.

What Does It Mean When Your Iguana Licks You?

It feels so nice having an iguana sitting on you and starting to lick you. Not one or two iguana owners will want this to happen frequently, but more; maybe you’re even one of them.

Often, iguanas lick almost anything they find, including your hands, neck, or face, and this means something, except that many caretakers don’t comprehend the message.

Tongue movement is part of an iguana’s way of communication, and these reptiles expect people to understand them. It’s very normal if your lizard licks you; take it as a positive sign. So, what does it mean when an iguana licks you?

They Appreciate and Try to Learn More About You

More often, iguanas lick a person when they want to learn more about them. So, even after bonding with your iguana, there is still a lot that these lizards would want to learn from you. It’s like their curiosity multiplies every day.

Iguanas have a unique organ called Jacobson’s organ, which helps them discern taste, smell, and capture chemical signals. The organ allows an iguana to collect information when they lick a person or objects.

Be proud to see such behavior with your lizard or when it licks you. It is a pretty good way for this reptile to bond with you.

Your Iguanas Are Using Its Tongue to Explore

An iguana will try to lick your clothes to confirm if they are edible. They are very curious eaters and lick things first to learn what’s edible. Licking also helps them to identify objects that pose any threat.

Likewise, iguanas tend to flick their tongue in the air or on you to find out what is smelling. The ability to explore things and gather information are all works of Jacobson’s organ.

Their curiosity drives them to want to know everything that is happening in their surroundings, and they surely achieve things.

Do Iguanas Lick Someone Else Other Than Their Owners?

Most pets are only friendly to their caretakers, and these are the people they normally lick. However, things are slightly different with iguanas as they can lick even unfamiliar persons or stuff out of curiosity.

So yes, iguanas tend to lick even people that are not their owners. Typically, if you’re new and the iguana notices you, it will flick its tongue severally and give little nibs while paying attention to your response.

Beware that such an iguana can bite you if it perceives a threat, or it might just dislike something on you. But these lizards recognize their owners and are pretty affectionate to them.

What Should You Do When Your Iguana Licks You?

Most first-time owners don’t appreciate this behavior of iguanas licking them. Some are even afraid that the iguana might give them a bite and won’t hesitate to withdraw their hand or finger.

However, choosing to take off your hand makes the iguana feel rejected and unloved. It’s good to let the iguana lick you, as this explains your willingness and delight to enjoy its company. The iguana is extremely excited when you’re submissive.

Moreover, don’t be afraid that your iguana will bite you as that isn’t its intention. The lizard only wants to feel your comfort and pleasure in playing with it.

But if you’re not in the mood, a better alternative option is to provide an iguana toy—the iguana loves playing with these toys too.

Never ignore your iguana when it’s trying to communicate to you. To give an appropriate response, you need to comprehend every language of iguanas, including tongue movement, head movement, etc.

If your iguana licks you, don’t kick it or withdraw yourself. It will make the iguana lonely and feel rejected, and to make it worse by the person it cherishes.

An iguana appreciates you and gets to learn more about you through licking. These reptiles also lick to explore things.