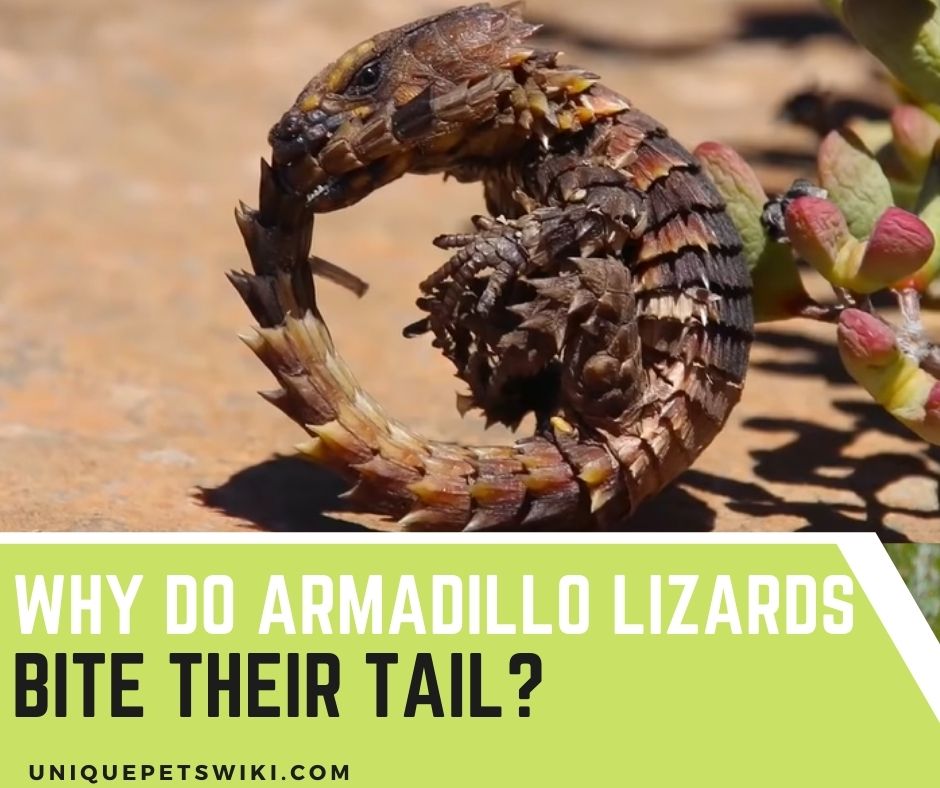 Why do armadillo lizards bite their tails? Let’s find out together in this article.

Armadillo lizards, also known as Armadillo girdled lizards, are mind-blowing and unique lizard species that you can keep as a pet. You will find them fascinating as they have numerous interesting abilities. Like armadillos, this lizard species has a long tail that is the same in length as its body.

Armadillo lizards have lots of useful adaptation techniques that help them to survive in the wild. You may find your armadillo lizards biting their tail and then be wondering what this behavior means.

In this article, we will help shed light on why armadillo lizards bite their tail and some other interesting tricks that they do.

What Is The Armadillo Girdled Lizard?

Armadillo lizards are among the cutest and most eccentric reptiles that you can keep as pets. They look like an armadillo and have sharp armor-like features along with their bodies. Furthermore, they curl up when threatened, just like armadillos.

Armadillo lizards are brown, which helps them to blend well with the environment. They are slow-moving lizards, and they usually roam around in large groups.

Why Do Armadillo Lizards Bite Their Tail?

Like an armadillo, armadillo lizards usually curl themselves into a tight ball whenever they are threatened. They will roll themselves up and then bite their tail to help grip it in their jaw and form an armored sphere.

Armadillo lizards usually assume this position to help protect their soft underbelly. Furthermore, their body is covered by tough spines which make predators avoid them whenever they are in this position. However, this position is not effective against birds of prey.

This is a common thing done by armadillo lizards kept as pets because you restrict them to a small enclosure. This means they will need to prove that they are the dominant ones, especially if you are keeping females in the enclosure.

Other Defensive Traits Of Armadillo Lizard

Here are some other defensive traits used by armadillo lizards to avoid predators.

The best thing is that armadillo lizards can grow a new tail, but it will take longer. This will make them more vulnerable during the period of growing a new tail.

Armadillo lizards prefer to hide from predators than to fight them. However, they have an extremely powerful jaw for attacking any creatures that threaten them. They can use their jaws to cut down the toes or small limbs of their opponents in a fight.

However, armadillo lizards can be very territorial and will use their strong jaws to fight and defend their home turf.