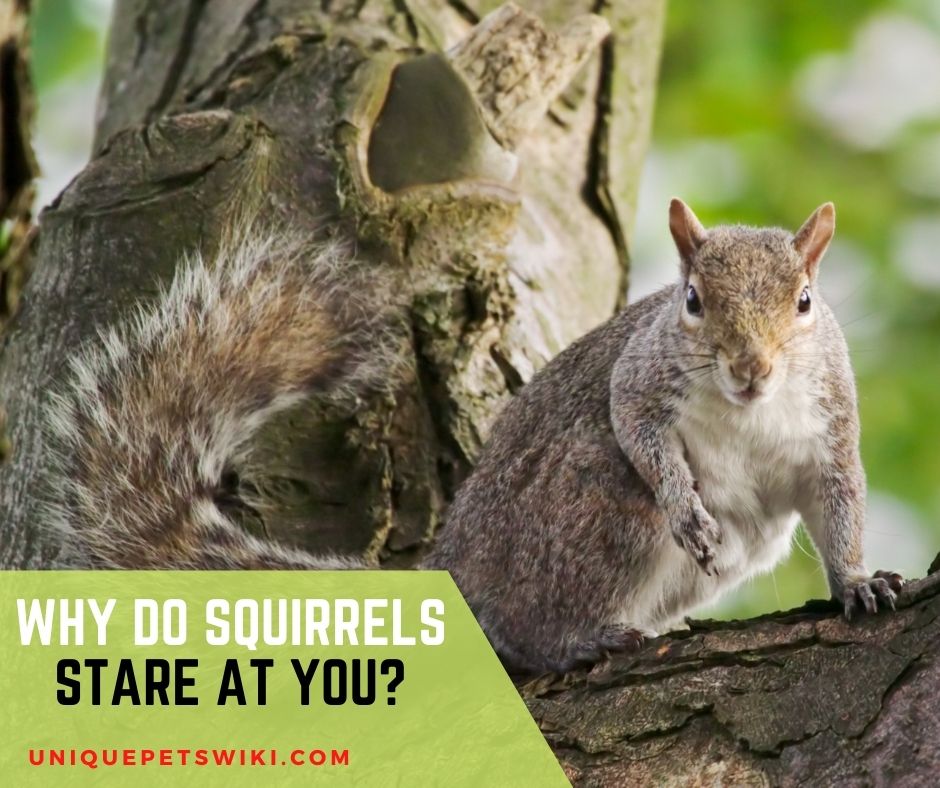 All who have ever come near a squirrel can attest that the animal stares at them when they get closer to it. But do you know why squirrels stare at you?

Squirrels are small rodents with many predators; hence, they need to stay alert and aware of the current environment. If you have ever experienced a stare from the fellow, you might be wondering why they did that to you.

By going through this article, we will learn why squirrels stare at people. Is it only human beings they stare at, or do they stare at other creatures too?

Why Do Squirrels Stare at Me?

When the squirrels gaze at you, most likely it’s because of some movements you’ve made. It is only doing this to check whether you are or not a hazard to it. This act of staring at you is an indication that it’s trying to obtain some information about you.

As said earlier, a squirrel is a small rodent with so many predators. While in the jungle, they tend to keep themselves aware and alert of every movement made and what has caused the action.

Squirrels can stare at a person for various reasons, but most of these instances are out of curiosity, fear, or even checking whether it’s a piece of information being passed. As all animals have a character staring at people is the same character in a squirrel.

Squirrels sleep while their eyes are open; however, they might be asleep, and one thing is staring at him or them. Nevertheless, when sleeping and gets to hear a bit or slight movement, it automatically wakes up and glazes at the source.

Staring and Squirrels (What You Should Do?)

These mammal rodents do take a nature walk with their friends as humans do. If any danger arises, they communicate with their friends by making some. The brave ones relax and look up and get back to what it was doing, maybe eating or playing.

If squirrels stand by their hind legs by any chance, it might be a sign of warning to the others or a way of getting a clear view of the environment. Various reasons can make a squirrel staring at you; see them below.

In nature, squirrels are pretty inquisitive animals, and if they get to hear a slight sound or notice a single movement, they have to stare and sometimes approach the source.

Squirrels that visit our home backyards and feed on there will often visit the place. In case they notice a person they’re not familiar with, they have to stare and determine whether you are a threat or not to them.

If squirrels sense a sign of danger, they stand without a glitch as they don’t exist. Immediately they conclude that for sure there is the danger they run in an irregular path to confuse the predators.

Squirrels tend to make some noises to communicate with others and alert them about a predator’s presence or any danger in the run.

As we said there before, squirrels have got so many predators like the snake, raccoons, weasels, coyotes, among others. There are so many other animals that take squirrels as their source of food.

In reality, some humans still hunt squirrels and take them for food and others for sports. Hence, this has to make these creatures always be in a state of knowing their surroundings.

These creatures are magnificent when it comes to sense. That is because the prevalent part of their brains is devoted to chromatic functions.

That helps them keep safe in their surroundings. Therefore, any move made and squirrels hear it, mostly they sit down and stare to ensure they are safe.

If squirrels were trained on feeding at a particular time and location and all of a sudden, they don’t get food immediately, they sit down and glare at you or the one who feeds them bravely without a twinkle or absconding.

As we saw before, these creatures sleep while their eyes are open. One might think that a squirrel is staring at them, but instead, it’s sleeping. The first one needs to confirm whether it is sleeping or staring at them.

While it is sleeping, it quickly identifies any sign of danger as its brain is more visual in functioning

Will Squirrels Attack You After Staring?

It is exceptionally unusual for squirrels to assault individuals. Yet, there have been reported instances of squirrels assaulting and distressing individuals and pets now and then seriously enough to cause injury.

It is tough to track down extents on squirrel assaults, but the assaults are rarely mortal, and some might be gentle to the point that individuals don’t think to report them.

Squirrels are naturally timid, tame animals. If you approach one, it will regularly flee. A squirrel that feels cornered and can see no ways to get out may go into extreme attack mode in slight instances.

Squirrels may likewise assault to ensure their young are safe. Nonetheless, when a squirrel stares at a person and attacks them, most of the time, there is that one thing that forces it. It isn’t generally credible to decide why. The question remains, can you make friends with squirrels? If yes, how? Keep reading to find out.

Can You Make Friends with A Squirrel?

Becoming friends with the squirrels is very much possible, but it requires a lot of patience. Squirrels have a couple of enemies, and to become friends, you have to introduce a good rapport with them.

The process is very amusing to experience. Making friends with the squirrels can be achieved by using some various ways like;

Tip# 1: Luring the Fellow with Food.

Squirrels love staying in the backyards where they are fed on a systematic basis. One can use bird feeders to do this, which will attract them to stay closer to the feeder.

Some people still opt to do some hand-feeding the squirrels in their home compounds. It increases the trust of the squirrel in the individuals creating a bond of friendship with the creature. Whatever method you choose, ensure you feed it the right food.

Sweet foods like fruits give more diet and make squirrels like coming for more each day and every time they need food. It makes them trust you and their fear towards you diminishes with time, and now one can become friends.

Common Squirrel Behaviors and Body Languages You Should Know.

Squirrels use sounds and shake tails to communicate with others on different occasions, like mating or even when they sense danger.

Squirrels are good at hoarding food in different places in small portions. Some caches of seeds are never recovered, only to become seedlings.

These beings are good at using twigs to make their own nest. They do this due to their territorial character, which they use to create and live in colonies—mostly portrayed during the mating seasons.

Well, a squirrel staring at a human being might be very scary, but when one understands the creature, it becomes clear why.

Even when they stare at a person, it’s always good not to scare them if you want to be friends with them. Hence, one needs to create sweet and good ways to make squirrels live in peace and harmony with them.

Before you plan on getting a squirrel, there are things you need to know which is why you must read about them.