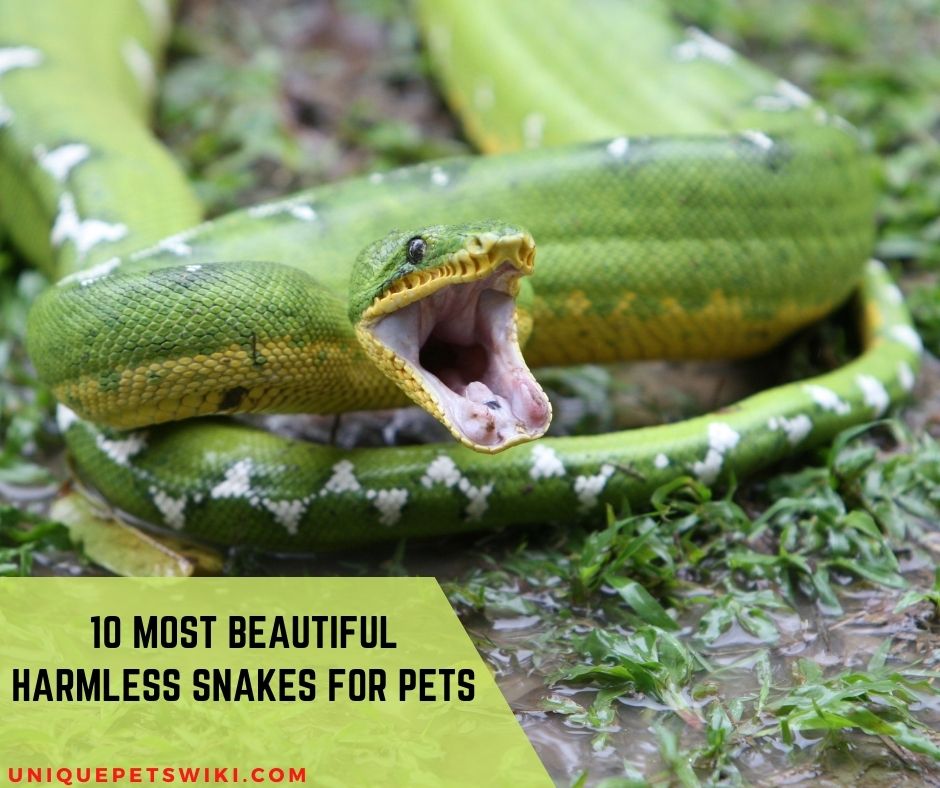 In most cases, people are usually terrified of snakes as they believe they represent something dangerous. However, snakes are among the unique and best pets that you can keep at home. They are also a perfect pet for hobbyists that want a long-term commitment with their pet.

There are more than 3,700 species of snakes over the world, and it should not be surprising to find them in different colors, sizes, and patterns. If humans don’t spend a lot of time fearing them, you will discover snakes are beautiful creatures and are fascinating.

In this article, we have compiled a list of some of the most beautiful harmless snakes that you can keep as pets and how you can care for them.

The northern water snakes are non-venomous aquatic snakes found in southern Ontario and the northeastern United States. They are usually found in lakes, streams, swamps, and other waterways and can grow to about 24-55 inches in length.

This is because it is quite easy to care for them, they have a docile attitude, and they can stay in a relatively small enclosure.

Another thing is that your children can easily handle them without any danger to them. Northern water snakes feed on fish, salamanders, frogs, small amphibians, and occasionally small mammals like mice.

The four-lined snake, a member of the Colubridae family, is also known as the Bulgarian ratsnake. It is a non-venomous snake species and among the largest European snakes. It got its name from the four dark stripes that run along its yellowish-brown body.

The eastern garter snake is a non-venomous snake commonly found in North America. They have a variable color pattern, but you can easily identify them by a yellow or white stripe that runs down the middle of its dark back.

You will also find a checkerboard pattern of dark squares and stripes on its side, and they have a rough scale. Garter snakes are usually active during the day, and they feed on salamanders, earthworms, frogs, and fish.

The garter snake is an ideal snake that you can keep as a pet because they are generally gentle and docile. Furthermore, they prefer spraying a musk to ward off danger instead of biting.

The emerald tree boa, also called emerald boa, is a non-venomous boa species found in the rainforests of South America. They usually grow to around 6-9 feet in length. The emerald tree boas have light coloration with irregular white zigzag stripes.

They are known to have the largest front teeth of any other non-venomous snake in the world. They are also regarded as tree-dwelling snakes and feed mainly on small mammals but can also eat smaller bird species, frogs, and lizards.

The emerald tree boa is a mind-blowing snake to keep as a pet. However, they are not suitable snake species for frequent handling because they can stress them and lose their tail.

They are also a perfect snake species that you can use as display animals because of their coloration and arboreal nature.

The rough green snake is a non-venomous colubrid found in North America. It has a very thin long body that can grow to an average length of 45 inches. It is green in color, which allows them to blend very well with green vegetation.

A rough green snake is a semi-arboreal snake that lives happily between ground, trees, and water. It feeds on insects such as crickets, grasshoppers, spiders and can even eat small frogs. They are a suitable pet for people that want to keep them as display animals.

This is because they do not like the handling and prefer to be left in their enclosure.

The bull snake is among the largest snakes that you can find in North America and the United States. They can grow to about 8ft in length. The bull snakes have a yellow or cream-colored base with brown or reddish-brown blotches on their back.

Although bull snakes are non-venomous snakes, they are ready to strike when disturbed. Bull snakes are powerful constrictors that can feed on small mammals like moles, mice, ground squirrels, rats, rabbits, and even ground-nesting birds and lizards.

The bull snake is a suitable pet for the expert hobbyist because they are quite hyperactive as a baby and juvenile.

The black rat snake, also called western rat snake, black snake, or pilot black snake, is a non-venomous colubrid found in central North America. They are closely related to the corn snake but not as popular.

Black rat snakes have a uniform black coloration, but you can find some individuals with traces of dark gray blotches and stripes. Black rat snakes can become very aggressive when startled and will vibrate their tail in dead leaves to mimic a venomous rattlesnake.

However, they make an excellent snake pet, even for beginner hobbyists.

The milk snake is a species of kingsnake and is among the most colorful snakes in the world. They are non-venomous, and they usually have a black, red, or yellow pattern with a redhead.

They are commonly found in the US and Central America and usually inhabit a rocky or woody area. The milk snake is not that large and can grow to about 2 feet during its first few years. They are very docile and rarely bites, making them a perfect snake species to keep as a pet.

Milk snakes don’t necessarily soak up the sun but get their heat from rocks and logs, which means you can get an under-tank heater for them.

Python is a non-venomous constricting snake found in the rainforests and deserts of Africa and Asia. Although they are non-venomous, they are potentially harmful to humans because they are usually very large and powerful.

You are going to find around 26 different species of pythons in the world. One of the best python species that can be kept as a pet even as a beginner hobbyist is the ball python. They usually grow to around 2-5 feet in length, and they are quite docile and easy to handle.

Ball pythons are not as big as numerous other constricting snakes and usually curl up in a ball when threatened. You can feed ball python with mice, either freshly killed or thawed.

Anacondas are considered the largest and the heaviest known snake species in the world and are usually found in tropical rainforests of South America. Anacondas can grow to around 25-30 feet in length and weigh around 230kg.

However, they are potentially dangerous to humans because they have enough power to kill a human. Anacondas are usually calm and tractable pets if they are captive-bred.

However, it is not suitable for anyone under 18 or anyone without experience working with large constrictors to keep them as a pet.

In this section, we will highlight how you can care for harmless snakes as a pet.

All snakes are carnivorous animals, and you should be ready to feed them with either live or dead animals. You can feed them once or twice a week with a mouse or other small rodents.

Many snake owners usually breed their own mice to help save money and control the quality of food that their snake is getting. Some snake owners love watching as their snake hunts for their prey and usually feed them with live food.

As a matter of caution, avoid feeding your pet snake in another enclosure other than it’s usual enclosure. It usually stresses them out.

Snakes are cold-blooded animals and require a heat supply to survive in a cage. This means you will need to set up a heat source in their cage to keep your snake healthy. You can use an overhead heat source like heat bulk or ceramic heat emitter as a source of heat for your snake.

What Are The Best Harmless Snakes For Beginners?

The best harmless snakes that are suitable for beginner hobbyists are ball python and a corn snake. This is because both snake species are docile in nature and rarely bite their owners.

Another thing is that they are available in a wide range of colors, and you can easily get them from a pet store close to you.

They also get used to handling and will stay with you for a long time (20-30 years lifespan). Finally, it is relatively easy to care for them and are quite hardy creatures.

There are many snake species out there that are harmless, and you can keep them as a pet. However, before you decide on the type of snake to keep as a pet, you should ensure they are docile, hardy, easily bred, and widely available.

This is why corn snakes and ball pythons are so popular and considered the best snakes to keep as a pet.