The Axolotl is a wonderful and unique pet for kids and grownups alike. They are known for their cute smiley faces and unique behaviors.

What is striking about axolotls is their rare ability to regenerate or regrow lost limbs and organs.

It is because of this ability that so many hobbyists and scientists have become ardent axolotl fans. Indeed, the interest in this beautiful creature is on the rise.

These little creatures are absolutely fascinating, and they’re sure to impress your friends and family with their uniqueness!

If you’re looking for some cool and interesting axolotl facts for kids, then you’ve come to the right place! In this guide, you will learn 12 cool axolotl facts.

Are Axolotl Good Pets For Kids?

Axolotls generally make good pets for kids. However, they do require a bit of know-how. In particular, axolotls need specific water parameters like pH, temperature, ammonia, nitrates, and nitrites.

Failing this, an axolotl will not thrive and might even suffer from serious health problems.

Here is a table summarizing an axolotl’s profile:

One of the coolest features of an axolotl is their ability to regenerate injured limbs. Like salamanders, axolotls can regrow parts of their eyes, brain, gills, limbs, spinal cord, and even parts of their brain!

Let us take a look at these 12 axolotl facts in detail.

The axolotl (Ambystoma mexicanum) undergoes a series of processes after it loses a limb.

This helps them regrow parts of the brain, spinal cord, heart, and even organs like lungs, kidneys, and eyes. Axolotls are even known to have regrown ovaries.

According to a study, axolotls can continue to develop neurons in the brain throughout their lives. Scientists have even found that axolotls develop parts of their brain and spinal cord even after a mechanical injury.

Some like Dr. James Godwin have even crushed an axolotl’s spinal cord only to find the spinal cord machinery completely healed within 3 weeks!

Axolotls tested in the laboratory were able to regrow their cut arm/leg almost 5 times. After the 5th amputation, the regrowth stopped.

According to experts, regeneration of limbs and injured organs is still possible in an axolotl’s senior years although the process gets a lot slower. Most juvenile axolotls are able to completely regrow their cut appendages within 40-50 days.

It is important to understand that the ability of regeneration is limited only to parts. An axolotl will not survive if you cut off its entire head.

Although they can regenerate their body parts, axolotls are certainly not immortal. They can only grow parts of their bodies.

This ability to regenerate organs and body parts depends on nerves that control the regeneration. This means that Axolotls cannot live forever.

Most well-looked-after axolotls in captivity have a lifespan of 12-15 years while those in the wild live for about 8-10 years. They could die of old age, disease, or get eaten by predators. 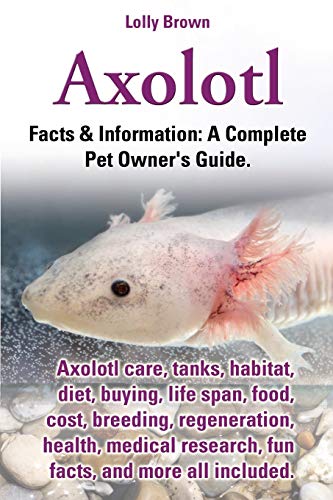 As of 2022, axolotls are listed on the critically endangered list by the Convention on International Trade in Endangered Species (CITIES) and the International Union for Conservation of Nature (IUCN).

Why Are They Scarce?

Human redevelopment, loss of habitat due to droughts, predatory fish like tilapia and carp that feast on axolotl eggs and chemical waste dumping in lakes have led to a decline in axolotl populations.

As such, these cute critters are only found in a few lakes and canals of Mexico. Many of these lakes have been diverted, filled, or paved over. Pollution running off the roads into these lakes has also damaged aquatic life to a great extent.

It is estimated that only about 1000 axolotls are alive in the world today. Of course, according to some reports, tens of thousands of axolotls and morphs may be found in research laboratories and home aquariums.

What Is Their Conservation Status?

Dr. Luis Zambrano first conducted a survey about the axolotl population in 1998. During this period, he discovered around 6000 axolotls in the lakes and canals of Mexico.

By 2017, the estimated density of axolotls was merely 35 per square kilometer.

They have now placed filters to prevent predatory fish from entering the axolotl’s habitat. These efforts will hopefully bear fruit and in a couple of decades, we will hopefully see an increase in axolotl populations.

Cute as an Axolotl 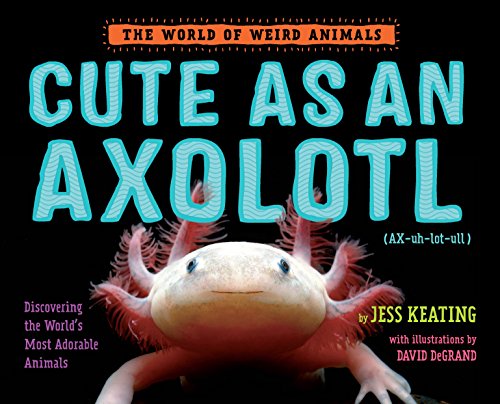 Cute as an Axolotl: Discovering the World's Most Adorable Animals (The World of Weird Animals)
Buy on Amazon

#4. Axolotl Have a Mythological Story

In Mexican Toltec and Aztec beliefs, it is believed that Axolotls are animal representatives of the so-called Vigilant God Xolotl. Xolotl’s role was to guide the dead on their final journey to the Underworld.

He was a dog-like creature and also the God of transformation, fire, lighting, sickness, and deformities. He was also believed to be the dark personification of the evening star Venus and the twin brother of Quetzalcoatl.

Xolotl is believed to have tricked Goddess Mictlantecuhtli and dragged the bones up to the light. With the help of Gods in Heaven, he created humankind.

A part of the Legend goes on to say that Xolotl then had a political fallout with the Gods. To escape being banished, he transformed himself into a salamander that the Aztecs called ‘Axolotls’.

They even used these salamanders as food since they believed it was a gift from the Gods themselves.

Axolotls are called Walking Fish but in reality, they are amphibians. The species is closely related to the Tiger Salamander.

Also, people mistake axolotls for waterdogs but the two are very different.

Do check out our article on Axolotl Vs. Waterdog to know the differences.

#6. Axolotl Is Considered a Delicacy

In many parts of Mexico and in countries like Japan, axolotls are a delicacy. In Japan, they are served deep-fried and coated with a thin layer of batter.

They supposedly taste like white fish meat and have a delicious crunchy texture. They go well with rice and cold beer.

The ancient Aztecs and Mexicans themselves believed the axolotl to be a food offering from the lake system and a gift from the Gods.

Axolotl!: Fun Facts About the World’s Coolest Salamander An Info-Picturebook for Kids 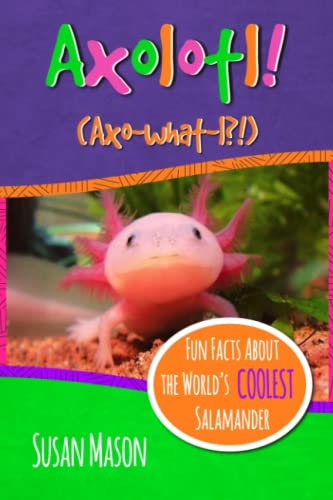 #7. Axolotl Can Eat Anything That Fits Their Mouth

Axolotls like to swallow their food whole despite the fact that they have teeth. However, they do not use their teeth to chew the food.

In the wild, they swallow small fish, slugs, snails, shrimp, worms, larvae, insects, and pretty much everything that fits in their small mouths. Yes, they may even swallow other salamanders.

#8. Axolotls Display a Variety of Colors

In the wild, axolotls are mostly seen in darker colors like brown, green, dark tan, black, etc. which help them camouflage against predators. Their bellies are of lighter greyish color. They also have mottling or speckles on their body.

Axolotls are neotenic creatures which means they retain some of their larval or immature characteristics even into their adulthood.

They are closely related to salamanders and retain salamander larval features like gills and caudal fins. Salamanders lose their external gills when they mature into adults but axolotls retain them.

Here is a cute axolotl song video by Rather Good which will get you humming along – it is a fictitious and funny narrative about an axolotl who turns into a salamander – although that isn’t at all likely to happen in real life!

Yes. Most axolotls spend the majority of their lives underwater. Some mature ones are known to venture out on the land for brief periods.

In captivity, your pet axolotl might come to the surface of the water from time to time. However, they mostly live entirely underwater.

#11. Axolotls Are Only Found In Mexico

Yes, Axolotls are native to Mexico. They are mainly found in Lake Xochimilco (pronounced Zo-Chee-Mil-Co). They were also found in Lake Chalco formerly located in the Valley of Mexico until it was drained. 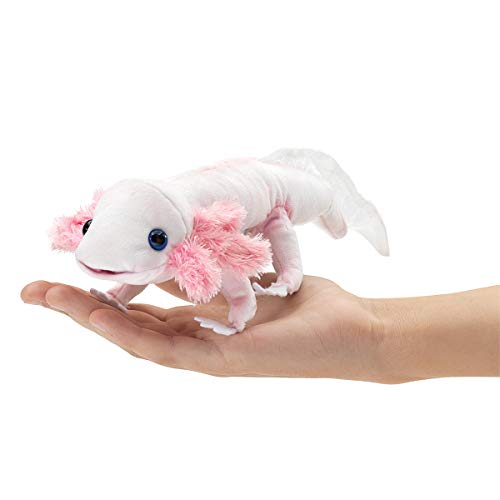 #12. Owning Axolotls Are Illegal in Some Regions

Yes, many countries have banned axolotls as pets because they are endangered.

In the US, in states like DC, New Jersey, California, and Maine, it is illegal to keep them as pets. In New Mexico, you are required to have a special permit for keeping an axolotl as a pet.

In Nova Scotia, you can keep them as pets but you need a special permit for doing so.

What cool things can axolotls do?

Axolotls can regenerate parts of their lost limbs, gills, spinal cord, heart, and even brain. What’s more, they can even regrow the same lost limb nearly 5 times.

What are axolotls babies called?

aby axolotls are called larvae. They reach maturity between 6 and 12 months although they continue to retain their larval features.

What is special about the axolotl?

Axolotls are one of the most examined salamanders in the world as they have the unique ability to regenerate parts of their lost limbs, heart, lungs, kidneys, eyes, brain, and spinal cord.
Some axolotls have a unique Mona Lisa-like smile that makes them look adorable.

With their beautiful feather gills, long lizard-like bodies, and cute permanent smiles, it is hard not to fall in love with an axolotl.

If you’re thinking of keeping one as a pet, it is important that you research it well.

Kids must understand that axolotls are delicate creatures and they need to be handled carefully. Failing this they could get seriously hurt. One must be committed to taking their care for the next 10-12 years.

We hope this guide helps you get information about this beautiful exotic pet and learn important facts about it.